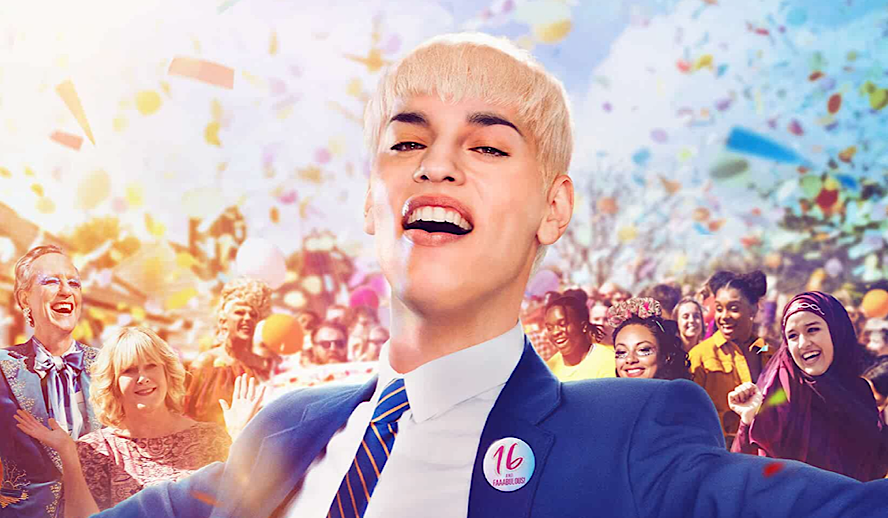 In a year where there seems to be a new musical adaptation premiering each week, it has become decidedly difficult for a film of this ilk to distinguish itself from the fray. Big-budget blockbusters like ‘In the Heights’ (2021) and ‘Dear Evan Hansen’ (2021) proved disappointing underperformers at the domestic box office despite being on opposite ends of the critical spectrum, displaying a growing indifference to the purported recrudescence of the movie musical amongst the general moviegoing populus. But just because the field has become increasingly oversaturated of late does not mean that there is no longer the ability to craft pleasant and distinct surprises, no better represented than Amazon Prime’s latest melodic spectacle, ‘Everybody’s Talking About Jamie’ (2021).

Adapted from the award-winning West End stage musical of the same name, itself an adaptation of the BBC Three documentary ‘Jamie: Drag Queen at 16’ (2011), the film tells the story of the ostracized young teen Jamie New, a 16-year-old openly gay student living in Sheffield, England. The story follows Jamie’s pursuit to finally realize his dream of becoming a famed drag queen, with the eventual goal of using his school’s prom as his own official coming-out coronation. Impressively realized by first-time director Jonathan Butterell and starring first-time screen actor Max Harwood in the titular role, ‘Everybody’s Talking About Jamie’ is a delight from start to finish. Once one accepts the occasionally wonky autotune and dreadfully on-the-nose songwriting, they will be transported to a world of beauty and grace sure to leave its viewers inspired and empowered to start marching to the beat of their own drum.

A Story that Blends Relevant Themes with Crowd-Pleasing Musical Exhilaration

As becomes clear very early on in the film, Jamie New has always known he wanted to become a drag queen. A recurring flashback throughout ‘Everybody’s Talking About Jamie’ sees a very young Jamie try on his mother’s wedding dress, high heels, and makeup only to be discovered by his prejudiced and disapproving father portrayed by ‘The Green Knight’ (2021) actor Ralph Ineson. Jamie’s struggle throughout the movie is less focused on the character’s internal doubt or revocation, but rather his battle to overcome his father’s disappointment and disgust with his son. Now living with his single mother played exceptionally by Sarah Lancashire, Jamie blames himself for his parents’ separation and still holds out hope that his father will find his way back to them. On his 16th birthday, his mother gifts Jamie a pair of coveted ruby-encrusted heels.

Upon trying them on, Jamie realizes he can no longer hide his desires to become a drag queen inside, seeking out a local rundown drag shop named House of Loco alongside his best friend Pritti portrayed by Lauren Patel. At the shop, Jamie is greeted by a mysterious and eccentric older man who tells him the story of Loco Channelle, a preeminent force in the world of drag during the 1980s, before revealing that he himself was Loco many years ago. Featuring a scene-stealing turn from an acclaimed star of films like ‘Withnail & I’ (1987) and ‘Can You Ever Forgive Me?’ (2018) Richard E. Grant as Hugo Battersby and Loco Chanelle, the character then takes Jamie on a journey through the history of the drag queen movement through a string of home videos filmed during his career in the 1980s and featuring John McCrea (the actor who originated the character of Jamie on stage) as a young Loco.

After learning about the AIDS epidemic and all those that paved the way before his time, Jamie becomes determined to carry on their legacy, debuting his new persona Mimi Me at a local drag club in preparation for the prom. After being heckled by a group of boys from his school, Jamie is told he must wear a suit to the event so as to not to distract or detract from the experience of the rest of his classmates. Crestfallen, then confronts his father about the notes and flowers Jamie has been receiving from him. His father then tells him that it had been his mother sending the support in his name the whole time to make Jamie feel better, adding on that he no longer wants anything to do with him.

Jamie gives up hope in his dreams before having his spirits lifted by a visit with Grant and an emotional reckoning with his loving mother. With a newfound determination, Jamie decides to go to prom not as Mimi Me, but as himself, wearing the wedding dress he had first tried on as a young child and winning the support of his entire class. While there are certainly highs and lows along the way, the ending is one so effortlessly buoyant and charming it’s sure to earn a beleaguered grin and steady head-bob from even the harshest of critics.

One of the film’s greatest strengths is its instantly endearing earnestness when it comes to its songs and those singing them. While this sincerity can often come across as the film not being “in on the joke”, it demonstrates in equal parts a devotion to the genre and the mode of storytelling. The song “Don’t Even Know It” certainly serves as a pace-setter for the rest of the film, letting audiences know right off the bat the world they are inhabiting and the stylistic extravagance with which the rest of the story will be spelled out. “Wall in My Head” is equally fantastical in a far different manner, displaying what may be the film’s most cinematic visuals and eye-catching flare despite being the least imagined number.

Additionally, “This Was Me” may very well have been the film’s emotional highpoint, Grant’s haunting aria aptly scoring the steady evolution of Hugo’s home videos from the youthful exuberance of the early drag scene to the tragic reverberations of the AIDS crisis, expertly encapsulated in the devastating reactions to the news that not even rock legend Freddie Mercury could conquer the disease. “He’s My Boy” is of course a tear-jerker thanks in large part to Lancashire’s believably devoted performance and surprisingly crisp singing voice. At worst, the songs are little more than snappy music videos sure to get feet tapping, and at best they are truly resonant contemplations of self-realization and adulthood right up there among the year’s best.

An Emotional Journey Towards Accepting Who You Were Meant To Be

At the end of the day, ‘Everybody’s Talking About Jamie’ may not add anything shocking or new to the movie musical formula, but it does take the worn-out schematics and use them to tell a fresh and bold story about breaking down imaginary cultural boundaries and gender norms. In many ways, the film feels parallel with the current discourse surrounding gender identity and the freedom to express oneself in whatever way they see fit, giving the film a greater sense of importance and social relevance than it may have otherwise received. Jamie’s story transcends the magnificent world of drag queens and becomes one applicable to all of those struggling with confidence and courage, and will hopefully still be talked about for many years to come.