In Celebration of Elliot Page: A Look Back on the ‘Juno’ Star’s Catalogue of Excellent Work 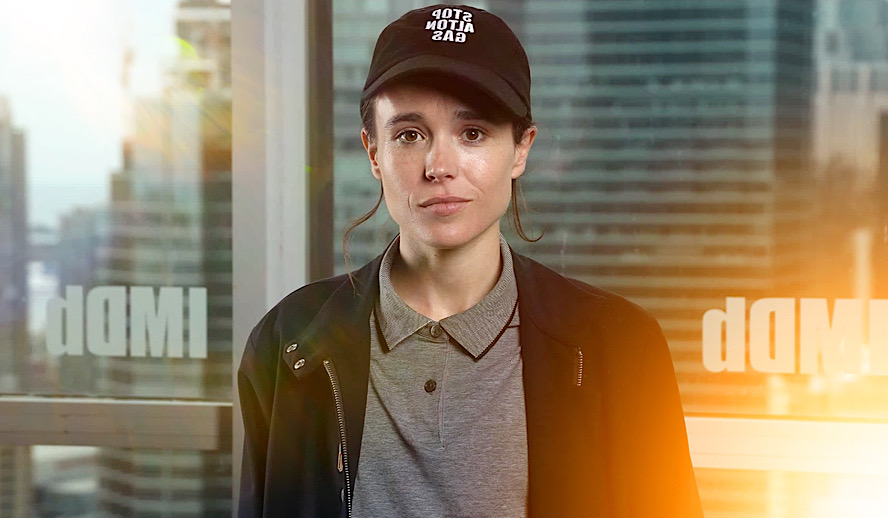 A resounding round of applause for Elliot Page, everyone’s favorite 5’1” Canadian actor, who has recently made public their trans identity! In a touching letter to his fans, Page wrote “Hi friends, I want to share with you that I am trans, my pronouns are he/they, and my name is Elliot. I feel lucky to be writing this. To be here. To have arrived at this place in my life.”

Not only is his coming out monumental for the world of trans actors and Hollywood, but Elliot Page is reinforcing the non-binary identity as valid and whole for the world to recognize. As a celebration of both his past and what is to come, today we’ll be counting down some of their top superlative on-screen appearances.

Before we begin, I would like to emphasize that Elliot Page’s list of classically female roles does not take away from his male identity in any way, and fictional characters are certainly up for more interpretation than any human identification. Elliot Page identifies with both the non-binary label as well as a male label, and no publication should feel the need to mention his deadname or past presentation.

In a dark fight between maternal instinct and being young and irresponsible, Elliot Page played the lost Tallulah in the titular film, released in 2016 at Sundance with positive reception. While a large part of Page’s filmography is centered around family discourse and the many lengths one would go to protect someone else, Tallulah stands out against the rest as thoughtful and decisive. Page gives an all-in performance that leaves the viewer with much to think about- What’s my place in everyone’s life? Am I a good person? Touching, heartbreaking, and a diamond in the Netflix Original dust, Tallulah is one of Elliot Page’s top drama performances.

Rarely do I see people gush about the perfect slice-of-life novels, Tales of the City and great was my surprise when I saw Netflix was following up on the many attempted miniseries that have been produced before. Tales of the City is about the residents of 28 Barbary Lane, a house that largely serves as a queer sanctuary in the midst of San Francisco. Page plays Shawna Hawkins and got to lean into their queer identity more than ever before on screen, and their performance truly reflected this; Shawna is complicated and layered while still being an inviting presence on screen for the viewer to enjoy. Tales of the City was released on Netflix and needs no previous watching, just dive right in.

Shut up, crime! Plucky and bold, Page stars as the young Libby to Rainn Wilson’s Frank Darbo, aka, the “Crimson Bolt,” in this dark comedy about a man trying to avenge his wife with faux superhero skills. Returning to his roots in quasi-arthouse comedy, Elliot Page got to shine with their pitch-perfect comedic timing that made this movie Super sing like a bird. There is seemingly little to be said about a James Gunn superhero film after his stint with Marvel and the Guardians of the Galaxy, but folks seem to forget the sheer entertainment value Page and Wilson bring as a crime-fighting duo with no actual powers to their name.

This is, in my opinion, the forgotten gem of the 2000s. Whip It is about the quintessential teenager stuck in the unforgiving land of suburbia, until Bliss Cavendar, played by Page, discovers a roller derby league and a brand new world. There is no other word to describe this movie other than plain fun- Drew Barrymore makes a brave attempt at directing and passes with flying colors, the cast is stacked with women who know their comedy, and Page stands in the center as an unpolished pearl of an actor. He gives the most raw-edged, sympathetic performance as Bliss- but the movie will definitely make you want to go out and grab yourself some knee pads and skates.

If you haven’t heard of Netflix’s hit series, The Umbrella Academy, it’s time to crawl out from that rock you’ve been hiding under. Focusing on the lives of seven unorthodox superheroes after their time in the spotlight has meandered, Elliot Page plays the unassuming Vanya, the eighth child that is seeming “normal.” Vanya is the center of the show, even though their siblings are far more complicated at the surface (and the end of the world is quickly approaching), and Page knocks it completely out of the park. The restraint and power he is able to manipulate within his character is downright astounding, and it is a wonder how he did not receive more nominations for his performance.

You didn’t just dream it- Inception was Page’s second film to gain a massive following, and it is certainly his most popular. In Nolan’s artfully designed concept of dream-sharing and memory theft, Page played the brilliant student Ariadne, who joins Cobb’s (Leonardo DiCaprio) team as their architect for the dream world. While there is larger immortalization in DiCaprio and Marion Cotillard’s performances, Elliot Page’s performance served as a linchpin in the success of the film. Quietly powerful, understated, and even witty at times, Page’s performance in Inception is a sight to behold.

Damn skippy, I couldn’t not put the film Page was Academy Award-nominated for (making them the first trans person to be nominated for an Academy Award for Best Actor!) at the top of this list, but it is well-deserved. The coming of age film stars Elliot Page as the titular character, named after Zeus’ official wife in Roman mythology, and his performance is near-perfect. Juno is so utterly raw and whole as a teenaged girl trying to understand how life works- She goes back and forth between a likable, quirky teen and a sympathetic kid who doesn’t understand the world as whole. Page gives the performance of a lifetime in his breakout role, and we sure won’t forget it.

In the end, Elliot Page is the beloved actor we have always known and loved, and I am glad he is able to live earnestly with no reservations. They are an inspiration to the world of queer people, and I hope his bravery is only respected as he continues to astound us on and off-screen.