‘Dallas Buyers Club’: A Pretty Picture in a House on Fire 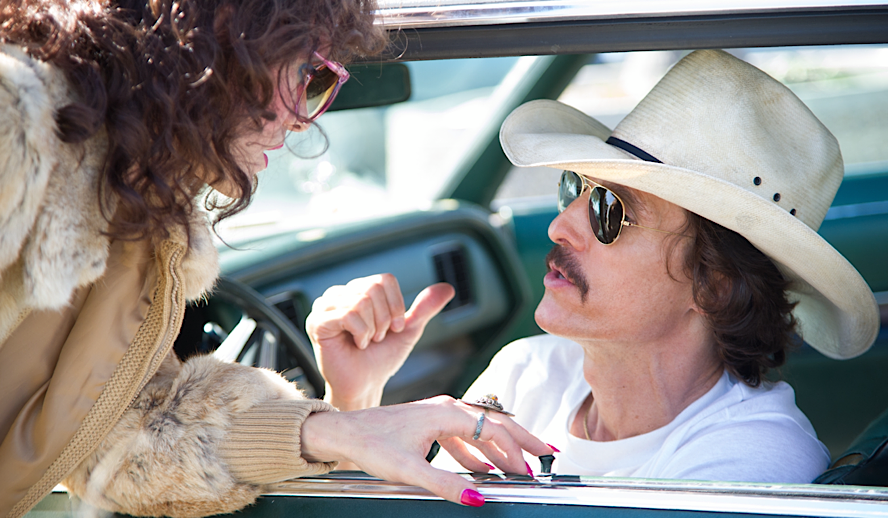 “It’s a scientific fact that gratitude reciprocates.” These are the words of Mathew McConaughey during his Oscar acceptance speech in 2014 for his performance as Ron Woodroof in Dallas Buyers Club. How fitting for him to focus on the nature of gratitude in his speech when the Jean-Marc Vallée directed film he stars in champions themes such as generosity and integrity in the face of adversity.

With Jared Leto and Jennifer Garner playing supporting roles, the film illustrates the gripping realities of the AIDS epidemic and the damning effect that a corrupt, money-hungry government can leave on entire communities. Taking home two Academy Awards, the film is a gritty dissection based on a true story of Texan pride that’s been riddled and bruised with stinging visceral pains.

Related article: My Story Trying to Walk Away from Harry Potter, JK Rowling, Her Transphobic Views

McConaughey sinks his fangs deep into the bull riding, risky gambling Ron Woodroof. His characterization of the real-life Woodroof begins precise and sharp like a fresh wound. Watching McConaughey’s acting congeal reveals his Award-Winning performance. While on the surface it may seem that Ron is your typical white, trashy, half-racist-half-homophobic cowboy with substance abuse and sex addiction problems, McConaughey not only illuminates these truthful qualities of Woodroof but wonderfully gives him a depth that reads better than any of his snarky one-liners in the script.

Just as Woodroof’s own blood turns against him, so does the mental turmoil that McConaughey begins to unearth as he confronts his AIDs disease. Slipping into desperation, he begins to make unlikely friends in the same individuals he’s despised. The film (or should I say the true events themselves) is excellent at juxtaposing perspectives to eventually marry them and show the audience their similarities in the process. Although Ron has expressed a hatred for the LGBT+ community, in his time of need they become what he relies on the most.

The film becomes a conversation about knowledge and which truths matter the most in our society. In establishing a Dallas Buyers Club, an alternative membership-based medicinal supplier for HIV/AIDS patients, Ron was doing intense research and discovering a seemingly better way of helping people than what the FDA could approve.

His endeavor initially begins out of survival instincts, but soon becomes leverage for the opportunity of a better life. When Ron starts to embrace his mortality and begins living his life sacredly, Woodroof emerges out of his fragile chrysalis and McConaughey takes flight.

Even a Cinematic Masterpiece Isn’t Perfect

True ascension is a core theme to a film about helplessness and fighting death. In one fell swoop of cinematic genius, a moment of fluttering breathlessness lifts the story to new directorial heights, and unprecedented lows in the film. Jared Leto’s character is at the forefront of an entire rabble of traumatic scenes. He plays the real-life individual Rayon, a queer, feminine presenting AIDs patient. While the acting is masterful, watching the film in 2020, it’s difficult to decide what precisely to make of the casting choice of Rayon.

Leto is not queer nor is he trans. Leto playing this role is incredibly ironic given the film’s theme of queer erasure. How can a film highlight the perils of the AIDs crisis on the queer community and hire no queer actors to play it out in lead roles?

Woodroof is a stunning amalgamation of the multiple meanings of being a man. But by uplifting his story and not hiring any queer actors to play the top-billed characters (who were queer in real life), the film’s message gets sucked into the Hollywood vacuum– the one that confuses select observation with a presentation of reality.

The film was released in 2013, and while part of me understands how different America was back then, a larger part of me understands how congruent America has stayed over the last seven years. The essential American problems, like lack of opportunity for marginalized people, have persisted since the beginning of ancient white supremacy. Sure one could adjust their critique of the film and take those seven years into consideration, but looking back at art without changing our contemporary gaze allows us to understand the actual meaning of film: filling in the gaps of human experiences.

Dallas Buyers Club is about doing the right thing, even when it puts you face to face with inconceivable consequences. So in terms of casting, why couldn’t Dallas Buyers Club heed its own message? Leto is stunning, but casting him asserts that he as a cis man can tell this story better than someone who’s lived the persecution trans women face daily. Illuminating the story of a straight, white, male racist sends the message that the AIDs epidemic was especially tragic because it hit people who weren’t queer as well.

Does this particular story have any Black or Indigenous people or any persons of color? No– which is ironic because although BIPOC only made up less than 20% of the US population in the 80s, they accounted for about 40% of all HIV/AIDS cases according to the CDC.

Dallas Buyers Club is a stunning tale, but giving this particular story a positive spin fails to encapsulate the heart of what the AIDs epidemic was actually about. The danger in this is a continuous misunderstanding of what American marginalized suffering is about– the marginalized. By continuing to tell stories involving the marginalized and selecting the version that uplifts cis white people (and is, therefore, more digestible for them), our historical amnesia will produce more hypocritical art.

It’s always interesting to see how film changes over time. This is my second viewing of Dallas Buyers Club. The first was a few years after it came out. I was about 14 years old and had no idea how to watch movies. But what I remember getting from it was an incredible sense of beauty, even if I didn’t precisely know what it all meant. A good director will sprinkle in those secret meanings that allow the film to take on new shapes after each viewing. But what happens when those messages are contorted by a shifted political sphere or a cultural-value shift?

Does a film (especially one that’s based on a real story) have any responsibility to time, space or politics, or are we to blame for perverting art with circumstances outside of itself? The answer is largely up to the individual, but as we approach our personal conclusions about the role of art, it’s essential to consider whose expense our art is being made and selected.

If no one fought for more inclusive art, our film sphere would be perfectly fine celebrating stories that at their core are a feat of white supremacy. We have to collectively refuse the historical erasure of our oppressed; we have to refuse it in our country, in our personal lives, and in our art.

This is not a crucifixion of Dallas Buyers Club. This is a proposal of what to consider when viewing our stories. Dallas Buyers Club is a stunning depiction of what it means to live, but it does not tell the full story of the thousands that died, and that makes me question its societal consideration as a needed story and popular cultural praise in the first place.