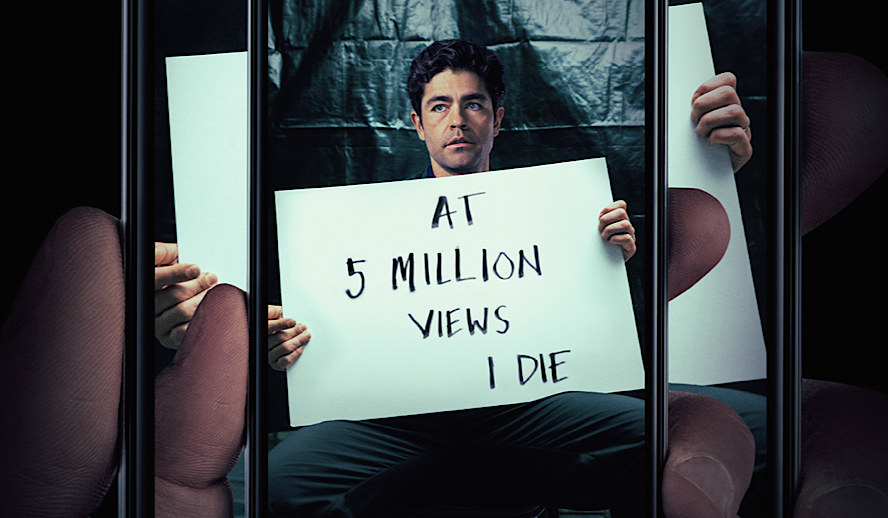 Social media plays a massive part in the way we interact as people. It might help strengthen a long-distance relationship and make you feel closer when you are thousands of miles apart. Dating apps have become an acceptable, if not, encourageable way of meeting people. And weirdly, the person on the other end feels safe, knowing there’s a screen dividing them, hiding their reality and their ideal image.

‘Clickbait‘ takes you on a binge-worthy spiral of suspense, as the show delivers incredible plot twists and open-mouthed situations. ‘Clickbait‘ is Netflix’s new limited series with eight episodes of internet nightmares, chasing truths, and unfolding drama.

Was it White Privilege?

A man, Nick Brewer (Adrian Grenier), is kidnapped. His battered face is then filmed and posted online, as he holds signs admitting to crimes against women. The video goes viral, while the headline lets the viewers know that the man will die when the video hits 5 million views. The story then follows the lives of Nick Brewer’s sister, Pia (Zoe Kazan), his wife, Sophie (Betty Gabriel), and kids, Ethan (Camaron Engels) and Kai (Jaylin Fletcher), and their struggle of relentlessly looking for the truth.

But really, when a white man is kidnapped and forced to pose with a sign that reads, “I abuse women.” The typical reaction is to believe he is, yet again, another white man trying to take advantage of his white privilege. In real life, the chances are high, and he probably did do it. The instinct of judging rushes up your spine, making you believe the worst and assuming he is actually the only one who can be guilty. But ‘Clickbait‘ explores the idea of judging a book by its cover and how wrong it is to assume that the intentions of an individual are whatever they are without knowing their true story.

Now I Have Trust Issues. Thanks, Again, Netflix

‘Clickbait‘ revives the paranoia that existed back in the day when dating apps were in their beginning stage. It makes you wonder if you’ve ever met someone through social media, how truth is the information laid upon you. For me, Ted Bundy was one story that sort of traumatized me. I couldn’t grasp the idea of being married to someone and, after many years, still not know who they really are. One thing is that for some reason your significant other ends up having a weird sexual fetish or a porn addiction, but the fact the there is a chance that your significant other can be an actual a serial killer? Come on! I already had trust issues, and the Ted Bundy tapes didn’t really help my case. ‘Clickbait’ kind of had the same effect on me. So thank you, Netflix, for adding an extra layer of trust issues towards my psyche.

‘Clickbait’ – It’s Not What It Looks Like, It’s Better

At first, the series felt like a poorly replicated version of ‘Saw’ because it seemed like an idea of the horror film minus the gore; I really thought, “what’s the point of it, then?” Or it also felt like another forensics crime drama that was going to last eight episodes too long. But ‘Clickbait’ is anything but that; it is actually quite unpredictable. And it gets you clutching your fingertips against the palms of your hands several times, and of course, it is a thousand times better than sitting at home watching re-runs of C.S.I. (wait, do people still watch those?)

It’s like a spider web of storylines connected to each other, and it continually confuses you into thinking you know who did the wrong thing, and mostly, every time you believe to be correct, you’re not. The show is filled with misunderstandings, lies, scandals, and family, as family relationships seem to be an important arc to follow throughout the series. ‘Clickbait’ focuses on the effect a family suffers while being part of a tragedy, their growth, and their separation. Its plot often creates a commentary on the impact the internet has on individuals and the media circus created by real-life murders. It highlights the extent of how out of touch people can be with their compassionate side when they are on the other side of the screen.

The structural components are quite interesting as each episode is dedicated to a different character. The writers chose to run deeper into the character’s lives and communicate each character’s role in Nick Brewer’s life. The series is a sort of folded triptych, unraveling twists here and there that had you staring at the screen without blinking.

The series lead is played by Zoe Kazan, but the structure of the show doesn’t allow for one character to have all the spotlight, as each and every unexpected detail is unfolded along with a different character every time. ‘Clickbait’ for sure follows the rules of a well-done “whodunit” storyline, because the series accomplishes to move its suspects smoothly and quickly. Leaving its viewers startled at the end. I promise, you will be grabbing your head with your fingertips, asking your TV something like, “wait, what?!”

Not Your Typical Heroic Figures– Which We Love

‘Clickbait’ evidently tries to break molds when it comes to representation. They do a great job making the series diverse. There is Muslim representation, and I can gladly say, it is not in a stereotypical way. The character of Amiri (Phoenix Raei), the detective, is shown in a brighter and nobler light. Detective Amiri was written and portrayed as a heroic figure. Yay!

At times, the writing felt a bit flat and unrealistic towards the extremely high stakes circumstances, especially in the first few episodes. But as the show continues, the script grows into a more personable dialogue and creates better three-dimensional characters. It delivers a deeper understanding of the reality chosen for us. Oh, let me lastly add, that thanks to ‘Clickbait,’ I am deeply obsessed with Daniel Henshall. His performance as Simon Oxley was top-notch, he did an incredible job. I fairly believe the episode he is featured in to be my favorite. You’ll understand what I’m talking about when you see it.

‘Clickbait’ is a sensational crime drama that you need to binge-watch, like, right this second.