‘The Princess Switch 3’: A Genre-Crossing, Triple-Hudgens Rom-Com for the Holiday Season 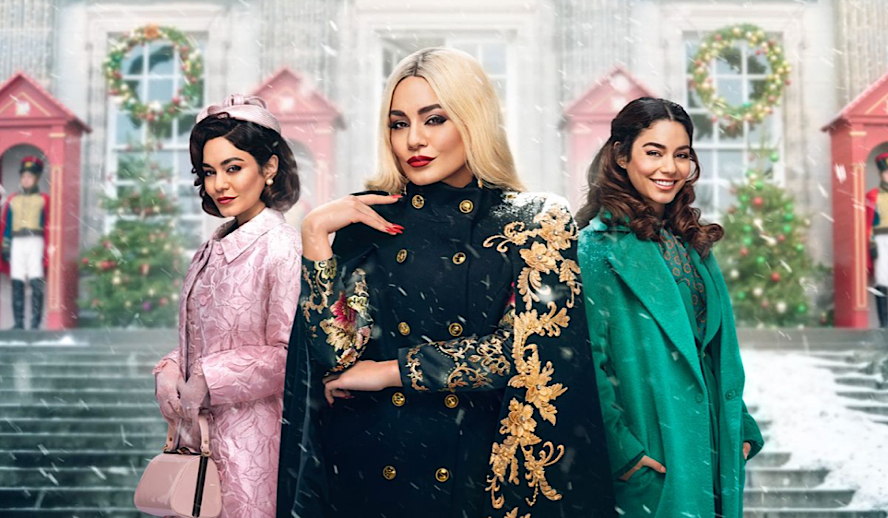 There’s nothing that gets one in the Christmas spirit quite like a fluff-filled, Hallmark-adjacent Netflix special. In the third installment of the ‘The Princess Switch’ series, titled ‘The Princess Switch 3: Romancing the Star’, Vanessa Hudgens reprises her handful of royal roles as Stacy, Margaret, and our resident antagonist, Fiona. After a priceless relic (the ‘Star of Peace’) of the Vatican is stolen from their International Christmas Festival, our array of lookalikes, and most notably, our antagonist-turned-protagonist Fiona, must embark on a heist of international proportions. An ‘Ocean’s Eleven’ of schticky Christmas rom-coms, if you will.

Films with that TV-special aesthetic aren’t usually my taste, and the third installment of a rom-com trilogy no less, but ‘The Princess Switch 3’ follows all of the continuous developments that you would expect from the light-hearted seasonal series spectacular. Vanessa Hudgens – in the roles of Stacy and Margaret, at least – harkens back to the honey-sweetness of Gabriella Montez in ‘High School Musical’, smiling tenderly and delivering lines so coated in courtesy that you can hardly have a moment to pity their problems (which will inevitably be solved, but will it be through the spirit of Christmas, or of friendship?) Every once in a while we’ll take a short break to watch Stacy or Margaret and their boy-toys stroll through an opulent room undoubtedly adorned in holiday lights and decorations.

Once they kiss at the end, prepare yourself for the next scene; this is like the visual version of a period at the end of a sentence for ‘The Princess Switch 3’. Though each character is pretty clearly distinguished in their personality, mannerisms, and dress, Hudgens does wonders to imbue these characters with obvious and memorable physicalities. Where another actor might lean harder into the nuances of their differences, Hudgens creates a unique and noticeable difference for each of her cosmetically identical characters (relying heavily on voice and accent), and you can’t deny that she seems to have a damn good, goofy little time.

On this note of opulence, while the sets are gorgeous, with scenic views of snow-topped castles and colorful, glittering Christmas lights, they are wholly unimportant to the story as a whole. There’s this sense – and not in the multi-cultural, melting pot symbolism sort of way – that this story could happen anywhere, at any time, and within that, there’s a thematic meaningless to it all. Among the gleaming tree-centered parties and decadent outfits in the form of Fiona’s gaudy fashion choices, the lack of personal artistic voice for this film becomes harder to ignore. The same goes for the cinematography, which has no notable tone whatsoever other than “pretty winter” and transitions that rival the likes of Windows Movie Maker.

As obvious as it seems, it needs to be said that Vanessa Hudgens injects basically every ounce of vibrancy into this series. While the plot would have withered by the second movie with another, less committed, less expressive actor, Hudgens shows her ‘range’ in the emotional expression of a character that clearly started as a caricature, Fiona. Mostly consisting of a deeply exaggerated British accent and a collection of annoying, snappy little comebacks, Fiona reeks of that natural evil within someone like Cruella de Vil. But, for our ultimately rom-com oriented purposes, Hudgens does what she can to craft depth from a character intended for minor character-hood in the first place.

However, the romantic relationship between Fiona and her smart and wealthy, ‘it’s-complicated’ companion Peter Maxwell (which acts as the emotional narrative throughline for this installment) is forced by the inauthenticity of their chemistry. I found Maxwell (played by Remy Hii) to be stiff and self-serious, lacking in a genuineness that I would have preferred in order to contrast the vain, superficial brashness of Fiona and her surface-level characterization. Their friends-to-exes-to-lovers arc is glaringly integrated over the course of the film in impersonal montages with dialogue and angst that is somehow even too trite for films as formulaic as these. Almost every line (romantic or not) is packed to the brim with obvious exposition, dressed up in lines so familiar that their contemporary use is almost surprising in their lack of self-awareness. By the time the conflict commences, I’m wondering what essence of a relationship that I’m even rooting for, and whether I’m rooting for it at all.

In closing, ‘The Princess Switch 3’ has all of the elements of the previous two: a triple dose of Hudgens, some romance, some comedy, and now, the added quality of an expensive international heist. With equal parts elaborate lazer traps and partnered dance sequences, this newest installment is an endeavor out of the rigid box of the romantic comedy genre, blending one part soft, secret-agent action with one part holiday spirit. If there’s one thing that these films do best, it passively gets you into the holiday spirit, and that’s the main reason that I would recommend this movie.

With all of that being said, I would be more than willing to be her Oscar campaign manager for both Best and Supporting Actress. Vanessa, call me!

Fans of Vanessa Hudgens can look forward to her next project, in which she will appear in ‘Army of the Dead: Lost Vegas’ alongside stars like Tig Notaro, Jena Malone, and Christian Slater. The series is set to premiere in 2022, and will be directed by Cinematic art department veteran, Jay Oliva.