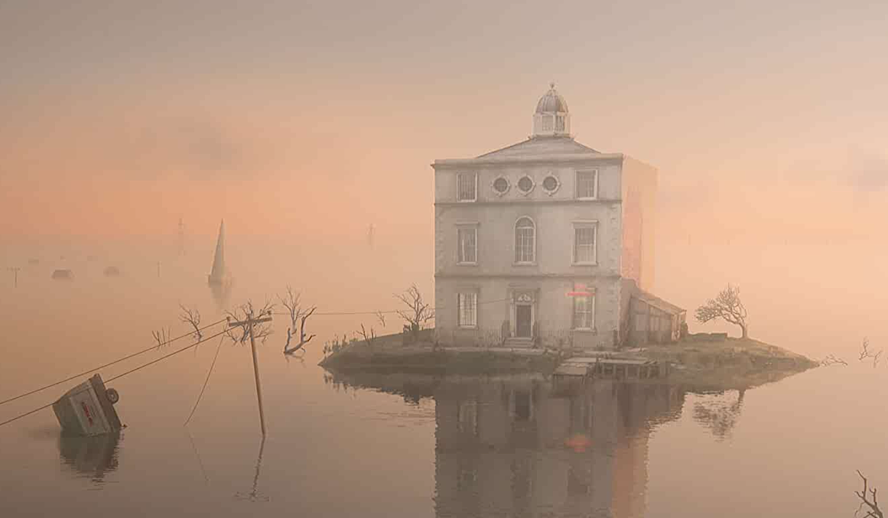 What made ‘Coraline’ such an iconic film was the strong contradiction between playful stop-motion animation and sinister themes; the new Netflix anthology series ‘The House’ has a similar effect on its audience. Despite two of the protagonists being animals and one being a child, the content of the stories is not necessarily suitable for younger audiences.

Each episode is directed by a different filmmaker which makes for a visually stunning story that is both darkly funny and simultaneously disturbing. “‘The House’ hones in on the anxieties that come with a home, whether it’s the control that others have over it, the critters inside the walls, or the attachment that could lead to one’s demise. With its rising directors each employing a surreal style, it creates a rich balance of ethereal, existential storytelling with stop-motion animation that’s so detailed and alive you can practically feel it on your fingertips,” according to Assistant Editor Nick Allen for Roger Ebert.

Written by Enda Walsh, three separate stories are told in one 97 minute film and are connected only by location and a disarming sense of eeriness.

The first story is directed by Emma de Swaef and Marc James Roels and takes place in the 1800s. It begins with the family being visited by much wealthier, and snobbier, relatives coming to see baby Isobel. After they insult the patriarch Raymond (Matthew Goode), he wanders into the woods to be drunk and alone. While he is there, he receives a mysterious offer from an eccentric architect named Mr. Van Schoonbeek. Schoonbeek will build Raymond’s family a mansion for free under the sole condition that they will leave their old home behind. Since he was previously shamed for his class standing, Raymond jumps at the offer to have the biggest and most beautiful house in the area.

After they moved away from their nearby modest home into the new mansion, the oldest daughter Mabel (Mia Goth) grows uneasy. While her parents are in awe of the electricity, the prepared food, and the grandeur, Mabel begins to notice unsettling changes in both her parents and the state of the house. Not only is it constantly under renovations (including removing the stairs in the middle of the night), the employers are creepily subdued working in the dark and her parents are dressed by Van Schoonbeek in attire that is similar to ornamental furniture. The millionaire’s representative Mr. Thomas (Mark Heap) is losing his mind and the only ones seeming to notice are through the eyes of the children. “It’s an effectively spooky short, one that gets a great deal of intrigue out what is unfolding in the shadows, prefacing the house as a nonsensical trap,” reviewed Roger Ebert.

Swaef and Roels previously worked together on another anthology short ‘This Magnificent Cake!’. The design of the characters with tiny, clothes-together features and intricate details makes for an ominous beginning.

“Unlike the characters in the other two segments, Mabel and her family are human — but they’re an unusually soft and shapeless form of human, with bulging felted faces and beady little features, all set close together. They look like blurry Aardman Animation characters — Wallace and Gromit, but out of focus, or as if they’d melted a bit after being left out in the rain. The house around them is more concrete and looming, and it dwarfs them and makes them feel less real as the story progresses. The segment feels like a child’s nightmare, with an ending to match,” reviewed Polygon

While Episode II does not continue the Victorian era spookiness, it still encompasses a nightmarish feeling to it. Directed by Niki Lindroth von Bahr, an anthropomorphic rat (Jarvis Cocker) is preparing the home to be sold in the present day. The protagonist is referred to only as Developer, and he’s pooled all of his resources into the house up in order to refurbish and modernize.“While the bones of the house and the lines of its exterior are exactly the same, it seems to be a different place entirely — an airy, spacious home located in a bustling city,” said Polygon.

Despite his ambitious attitude, a series of things begin to go wrong just before the showing including discovering that the house is infested with fur-beetles. While attempting to maintain the chaos, the Developer does his best to make do with what he has because his life savings depend on it. Things start to get weird when two odd guests express interest in the house and decide to stay overnight. “They placate him with the repeated words that become freaky each time they’re growled: ‘We are extremely interested in the house.’ This short also nonetheless makes space for a grandiose and creepy-crawly musical number,” reviewed Roger Ebert.

While this segment is lighter than its predecessor and has glimpses of humor, it is still an increasingly stressful and creepy episode. “It’s meant to be mordantly funny to watch his exasperation as events escalate and his life falls apart, but viewers with empathy- or an aversion to maggots- may want to skip this one,” suggested Polygon.

The third segment was my personal favorite as it was the lightest in tone while still remaining visually stunning and entirely unique. Directed by Paloma Baeza, it takes place in the near post-apocalyptic future, where everything has flooded. Since last seen, the house has been converted into an apartment complex ran by a cat landlady named Rosa (Susan Wokoma).

Rosa is determined to renovate the mansion, hoping that if she fixes up the place not only will tenets stop leaving, but maybe they’ll even return. For now, though there are only two others living there, a young male cat named Elias (Will Sharpe) and a hippie cat lady named Jen (Helena Bonham Carter). While Rosa has a familial type bond with the two, neither of them can pay rent in real currency. Elias instead gives Rosa fish and Jen pays in crystals, both adding to her exacerbation.

One of Jen’s equally mystical friends, Cosmos comes to visit, and while Rosa is skeptical he brings skills that she could use. He’s a carpenter… kind of. However, the house is slowly flooding and it’s beyond Rosa’s control despite her vision. “As the least bleak of the three shorts, this one shows how the promise of a house has a seductive power, representing a desire to cling to the past even when the floor below you is slowly flooding,” according to Roger Ebert.

This story easily has the most hope as well as the most genuinely likable characters faced with an entirely possible environmental catastrophe. Rosa’s obsession to remain with the house, despite everyone leaving and searching for life elsewhere, makes for a beautiful story arc. This segment acts as the connecting tie between the three stories, where before it feels like they have nothing in common except for the location. “Walsh’s scripts don’t initially seem to take place in the same world or have much in common, apart from the house’s layout, this third segment brings all three into focus,” said Polygon.

While the stories, voice acting, and premise are all wonderful, what truly makes ‘The House’ memorable is the stop-motion animation. “Through all three stories, the animation is the star, with the textures of each character’s fur or skin manipulated as much as their limbs and heads are, and the movement made so smooth as to make the viewer forget it’s a stop-action animated film. Despite the grimness of the stories, the expressiveness of the animation is what kept us engaged,” reviewed Decider.

While the three segments are distinct from each other, the animation provides consistency to the overall tone. It adds elements of playfulness in a dark and scary world, and moments of sadistic pleasure like while watching a grotesque bug musical number. What the animation does is provide eccentric flourishes to a rich story, allowing audiences to ignore the changing species or time periods.

The majority of the world lives in the details, like felt fires and intricate clothing. It is clear that the sets were a priority to these filmmakers and immense care and time was put into them. The craftsmanship put into this production only adds to the fever-dream elements of watching, and also creates a vivid and off-putting fantasy world that is worth checking out.