‘Ride the Eagle’: A Simple Film for the Covid Era 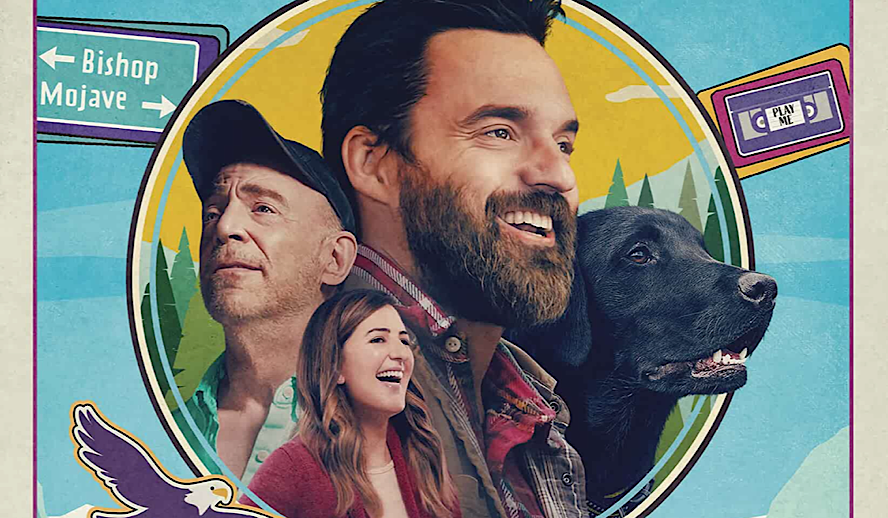 Trent O’Donnell’s ‘Ride the Eagle’ begins with the character of Honey (Susan Sarandon) struggling to record a message for her son with a handheld camera, unintentionally ringing true for everyone who tried to communicate with their parents through facetime this past year. ‘Ride the Eagle’ follows Leif (Jake Johnson), an emotionally stunted stoner, who is left with a cabin after his estranged hippie mother, Honey, dies. To get the cabin though, Leif has to complete a series of tasks that will lead him to the road of self-discovery. The film, aiming to open the audience’s eyes to the smaller things in life and the importance of family, offers a heartwarming story that never really reaches the emotional heights it aims to.

Making Films During the Pandemic

‘Ride the Eagle’ was filmed during the Covid-19 pandemic and this can easily be seen throughout the film. Characters often sit far apart from one another, having a lack of intimacy in many scenes, while other characters only communicate through the phone, using a split-screen effect or through video recordings. The film was shot in a way to keep both the actors and crew safe during the pandemic, following the Covid guidelines to prevent anyone involved from getting sick. The film was also shot this way for the sake of the story itself and the story’s themes about reconnecting with those from your past.

The character of Leif, who was abandoned by Honey as a child, hasn’t seen her since and reconnects with her after death through videotapes and her list of tasks. Leif is also instructed by the list to reconnect with his ex-girlfriend, Audrey (D’Arcy Carden), who he believes is the one who got away. While Leif is far from both characters, with Honey being dead and Audrey being eight hours away, Leif is still able to reconnect with them through other means. While he isn’t in the same room with them, Honey is able to reconnect with him through her videos while he is able to reconnect with Audrey through intimate phone calls. This all shows the importance of reconnecting with loved ones which many experienced during Covid. Being stuck at home, many felt farther from loved ones than ever before and had to use other means to stay connected, to stay in one another’s lives like how Leif does with those in his life.

The film does a tough balancing act of trying to be both emotionally impactful and witty and while the themes of the film are compelling, they can be better in theory than execution. At times the film’s humor, an interesting balance of actually smart and witty humor to quirky for the sake of it, can interrupt moments that should be more emotionally impactful. ‘Ride the Eagle’, the film, at times acts like its main character, afraid to show their real emotions. This can be seen where Leif, spreading his mother’s ashes is interrupted by a hiker and when Leif is crying over a painting his mother made while confusingly making Marvel movie styled quips over how dumb the painting is. Bits of unneeded attempts of humor like this interrupt the film’s potential for quiet and moodier moments where the audience can feel the emotional weight of the film’s themes.

This all isn’t to say that there aren’t some witty and very funny moments in the film. This is the case for Susan Sarandon’s Honey, whose voice-over and video messages are often both clever and heartwarming. She delivers some of the funniest moments in the film, from her hilariously weird paintings to her collection of weed hidden in every drawer. She is both the heart and humor of the film which is especially wonderful considering that her character doesn’t traditionally share a single scene with another character. J.K Simmons as Honey’s lover, Carl, also delivers some well-executed lines but he comes into the film both too late and for a short amount of time despite his character’s reveal acting as the film’s big twist.

While there are some funny moments, the film also suffers a bit from the cliche quirky independent movie comedy style, often having jokes for the sake of being either weird or to fill up quiet space. This can be seen in many of Leif’s quirks from him being in a successful band despite only playing bongos to not knowing how to survive in nature despite being introduced to the audience as a nature lover. This can also be seen in many of the dialogue and bits that interrupt the film’s emotional scenes, like the interrupting hiker. The character of Audrey, despite having some funny dialogue moments with Leif, also suffers from this quirky humor since it holds her back from being as emotionally complex as Leif.

Despite having just gotten over a breakup that she claims has messed her up, the film has her only as a vehicle for quirky humor, from using the blender while Leif is talking to only referring to Honey as “dead mom”. Instead of being as emotionally complex as the other characters, this just leaves her as the quirky love interest.

‘Ride the Eagle’ is an impressive achievement for a film that was made during Covid-19, using its restraints for the benefit of the film’s themes and stories. The film’s themes of reconnection and family ring extra-loud after a pandemic where people tried any mode possible to stay connected with those that mattered most to them. While the film’s themes are great in theory, the execution is often held back with the film’s reliance on quirky humor which interrupts many moments that had the potential to move the audience. While there are moments of genuine witty comedy, much of the film’s comedy acts as an interruption of any potential quiet and moving scene, almost as if the film is afraid to be too intimate. The character of Leif is afraid to show his true emotions and must learn to be honest with himself throughout the film and it seems as though ‘Ride the Eagle’ needs to learn to show its deeper emotions as well.

‘Ride the Eagle’ is available to stream on Amazon Prime