Oscar-Nominated ‘Quo Vadis, Aida?’: A Film that Forces You to Look at The Bosnian War in the Eyes 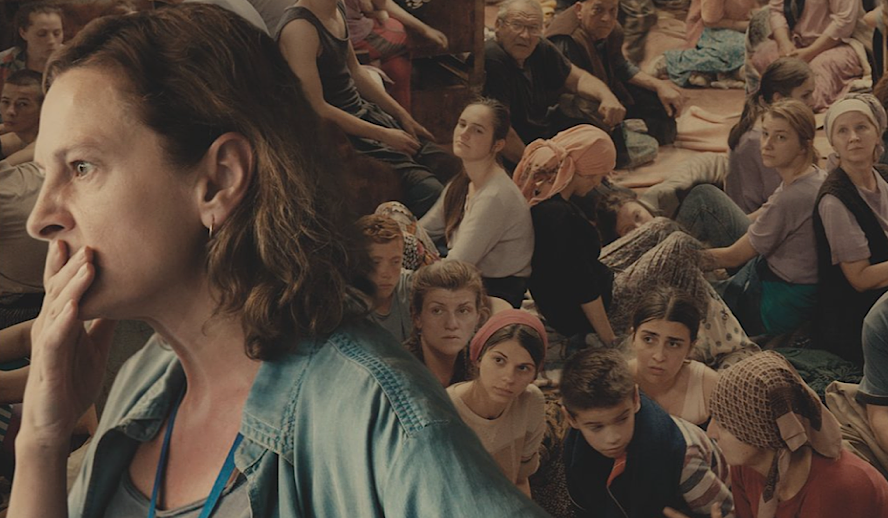 The dissolution of the Soviet Union is often associated with the fall of the Berlin Wall, that great visible structure the whole world watched crumble which united East Germany with its West German brother. That’s where the world’s attention was, where it has usually tended to focus: Western Europe. Declaration of autonomy was not the fairytale ending one would think it was after a visit to the Reagan Library.

The dissolution of the Soviet Union led to many conflicts in Southeast Europe, Central Asia, and The Caucasus, and by conflicts I mean wars and genocides started because of the parsing of former soviet states. Jasmila Žbanić‘s Oscar-nominated ‘Quo Vadis, Aida?’ (Where are You Going, Aida?) tells the story of one chapter in one such conflict through the eyes of one woman.

The conflict: the Bosnian War, which started after the breakup of Yugoslavia and the creation of the state of Bosnia and Herzegovina. This nation of three ethnicities, Serbs, Bosniaks, and Croats was further plunged into war when Serbian militant groups mobilized to secure ethnic Serbian territories. The chapter: The Srebrenica Massacre, where over 8,000 Bosniak Muslim men and boys were killed by Serbian forces. The woman: Aida, an incredibly honest performance by Jasna Djuricic, a school teacher from Srebrenica who is working with the United Nations (UN) peacekeepers as a translator.

Civilians were first kept in and around the UN base before being virtually handed off to the Serbs who separated the women and men, killing the men and transporting the women away on buses, raping many. Aida is scrambling to both do her duty as a translator for the UN, and protect her husband and two sons, two goals that often clash. You’ll leave ‘Quo Vadis, Aida’ a little wiser and a whole lot sadder, but in a world with so much pain and so much left to do, ignorance is irresponsible.

Žbanić’s film is about a genocide, but it is not a genocide film. It is a gaze film, that is, one whose majority of emotional moments are expressed through expressions. The film opens with the family, father, two sons, and mother, sitting, in plain clothes, dad is in an undershirt, looking about their apartment and each other. They are what matter, this place is comfortable, safe, and all Aida can do is look at them with a look of uncertain tranquility. Gazes continue to steal the show, one particular instance is when Aida receives silent confirmation from a bus driver that the fate of the Bosnians is not the peaceful passage the Serbs promised when they put them on those buses.

Another is a party that Aida is reminiscing about, a joyful night in the past when the whole community got together. The camera allows each person in the circle dance to pause a moment and be the center frame to tell us who they are with no words. It’s a gentle approach, it seems to be telling an ignorant audience, look at what was lost by looking into someone’s face. On the outskirts of the UN base that is housing those who won’t fit inside, the camera takes its time to capture a mother and daughter embracing, a woman washing her clothes, boys laying down.

When Aida returns to her old apartment a group of unfamiliar men each gets a moment of camera time, as their unfamiliar faces stare at Aida, undoubtedly making her feel like an outsider in her own neighborhood. The film ends with a look, several looks actually, children singing for a new beginning, the faces of some who returned, some who invaded, and finally Aida, who takes smiling behind the pain to a new level. It’s almost the same look that she gave in the beginning, only any hints of uncertainty are replaced are now hints of disbelief that this actually happened.

Tragedy When the UN Fails to Uphold its Principles

Aida is real because she is not trying to be a hero, we never doubt for a second that her family is the most important thing to her. She would save them at any cost, unabashedly using her UN badge to get them out of lines while her neighbors and friends are pleading for her to take them as well. One memorable moment is when an elderly woman tells her that they have no access to restrooms and Aida’s response is “Grandma, I’m just an interpreter.” This is by no means a weakness of the film, Aida is one woman.

It is not up to her to save thousands of people, that responsibility would fall to the UN, you know, the intergovernmental organization aimed at peacekeeping and security? The Danish UN officers in charge of the base, led by Major Franken, played by Raymond Thiry, are powerless. From the very first scenes, it becomes obvious that the Bosnians are alone. Despite countless reassurances that an airstrike will meet the Serbs if they move any closer to the town, the mayor of Srebrenica is not convinced.

When pressed once more Franken vocalizes the obvious truth: “I’m just the piano player.” The mayor is the first casualty of the entire film minutes after this conversation happens. Franken’s frustration, and the audience’s,  escalates as he can’t understand why no airstrike was carried out and why UN headquarters is ignoring his pleas, a chilling reminder that help is never guaranteed even by those whose mission statement is centered around it.

Žbanić’s film is a reminder of what’s at risk when problems in nations people can’t readily place on a map go unnoticed, and the immense responsibility those who do know about them have to respond. The most recent of these post-Soviet conflicts happened last year, when under the beneath the shadow of the global pandemic, Azerbaijan broke the UN global ceasefire and started an offensive on the ethnically and historically Armenian lands of Artsakh to reclaim what they lost in the 1992 war.

Centuries-old churches were destroyed or rebranded as Azerbaijani, young boys were drafted and killed, entire cities and towns displaced, and more than 150 women and men are still being held as prisoners of war by Azerbaijan. ‘Quo Vada Aida’ is just one story in this narrative, but its success serves as a beacon of hope for the victims of all little-known conflicts, demonstrating just one of the many powerful and moving effects Cinema can have.

‘Quo Vada Aida?’ is in theatres and available to stream on Hulu.