Sanya Malhotra’s ‘Pagglait’: A Life-Altering Movie About Grief and How it Manifests 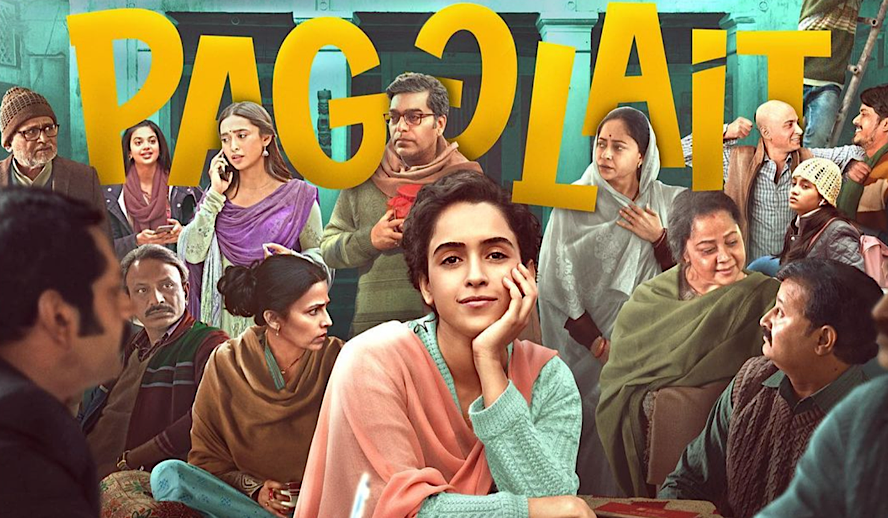 Within the first minute, ‘Pagglait’ shows us a deeply vast and detailed world. Big, soaring landscape shots are our introduction before we suddenly cut to a close-up shot of someone’s bottom on a bicycle seat. This large contrast immediately grabs the viewer and takes hold of them for the next two hours. Set in such a heavily populated country like India, ‘Pagglait’ tells a specific story but is able to make it universal.

In writer-director Umesh Bist’s best film to date, Sanya Malhotra stars as Sandhya, a widow who recently lost her late husband, Astik. To the surprise of those around her, Malhotra is unable to grieve and never cries which sums up the basic plot of the movie. As the film progresses, we dive deeper into Malhotra’s psyche and begin to understand her more and more. While her grief is different, more internal than external, she’s still mourning the man she was arranged to marry.

Throughout ‘Pagglait’, Indian tradition is explored as well as hierarchical family systems. Just because it’s traditional doesn’t mean it’s perfect and this idea is especially emphasized by Sandhya. Her own independence and attitude sets her apart from the rest of the family, which creates problems but also makes new solutions. ‘Pagglait’ is a beautifully shot movie as well and utilizes visual cues to signify changes in the story. Overall, one message rings true, there is no right way to mourn and the process is extremely varied for everyone.

‘Pagglait’ – The Different Stages of Grief

While everyone else is going through various stages of grief, Malhotra seems to be the only one keeping it together. In fact, the death barely seems to faze her. When Malhotra greets her grieving mother she even tells her to stop crying. If anything, her husband’s death only serves as an annoyance for her and a distraction from the norm. Malhotra doesn’t seem affected at all and even suggests her parents leave earlier than stay for the full two weeks they had planned.

At the beginning of the morning, there is only a split second where Malhotra seems truly affected by her husband’s death and that’s when she’s unpacking suitcases. She stumbles across white linen clothing and grabs it without realizing what it is. As soon as she fully sees the garment, she hastily re-packs it and stops what she’s doing to sit down. For Malhotra, she seems to be dealing with the death in a manner of shock.

For others, they react in many different ways. Astik’s brother turns to anger and lashing out at the dead. As the one who is tasked with performing the funeral rites for his late brother, he must follow strict guidelines for thirteen days. His emotions manifest into anger and bitterness, cursing Astik and his family. The more ‘Pagglait’ progresses, the more we delve into how Malhotra is dealing with her husband’s death.

Her grief is shown as the need to stress eat as well as the desire to escape this claustrophobic situation caused by her relatives. However, since her relatives don’t recognize her grief as “legitimate” they often pester her about why she’s not crying and even try to burn incense to rid her of an “evil eye”. One of the biggest things that ‘Pagglait’ shows is that the mourning process is different for everyone.

The overall tone of ‘Pagglait’ is dark and dreary, a perfect contrast to the beautiful things happening in the movie. While death is never easy, ‘Pagglait’ balances the good and the bad that evidently occur because of Astik’s death. For instance, many of the scenes take place at night in low lighting but the slight visual changes signify whether something is good or bad. In one scene, Astik’s brother, who has been forced to shave his head and now adhere to strict funeral rites, is seen smoking on the rooftop of the house. He’s caught by one of the uncles, admonished, and sent back to his room. The entire time, the lighting is a cool blue, like moonlight, and the lights up only parts of the scene.

In contrast is the next scene, where Nazia and one of Astik’s brothers are about to go out for dinner. The lighting here is golden under the streetlights, a much warmer tone in contrast to the previous scene. Here, the entire setting is lit up as Nazia and Astik’s brother joke around. Their chemistry is clear and their banter seems genuine. Astik’s death caused a lot of pain for the family, but it also inadvertently brought joy to others. His death brought Nazia a budding new relationship with his brother. These contrasting moments are signified by lighting changes and when put next to each other, it’s clear to see what death can do. While death is someone’s inevitable end, it’s often a new beginning for others.

Right from the beginning, it’s clear that Sandhya is different from the rest of her family. One of the best parts about ‘Pagglait’ is how independent she is. Sandhya has her own opinions and beliefs and while she may go along with something her mother says in order to appease her, it’s clear she doesn’t believe it. As well as that, she rebels by sneaking chips into her room when they’re frowned upon during this time. She even gets her friend, Nazia, to stay with her even though she’s supposed to be alone in her room. Even though she tries to live her life normally, it’s clear there’s a hierarchy among her and her family and she’s often forced to do things she doesn’t agree with.

Also, Sandhya is often criticized for her inability to cry, which subverts what traditional widows do. Her poor treatment at the hands of relatives, who think they know better than her, is demonstrated throughout the movie. Sandhya’s invisible grief also echoes how widows are treated by their families. One big argument in the movie is where Sandhya will stay after the 13 days of mourning are over. Some relatives argue that Sandhya must stay in her house where she lived with her husband while others say she must come back home. Director Bist is able to capture these universal traditions in India in a way that translates on the screen to different audiences.

‘Pagglait’ is available to stream on Netflix.