Money Heist Season 5: You Will Want to Hold Your Breath As The Robbery Continues 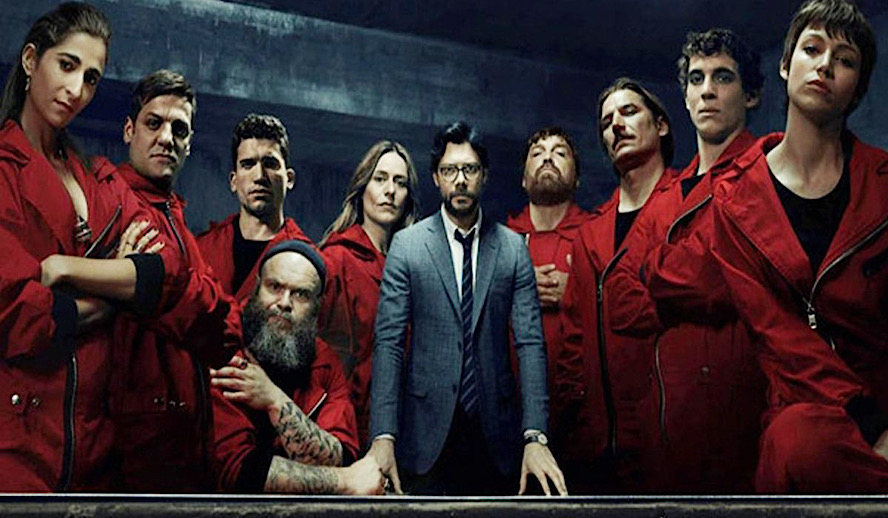 A group of outcasts gets recruited by a mastermind to become part of the biggest heist in history. The plan consists of printing out billions of euros in the Royal Mint of Spain and keeping the distance between each robber, just in case they get detained. Each robber gets assigned a fake name to make sure the distance between each person is met, such as Tokyo, which is our narrator’s name. But the execution never goes as smoothly as planned, and its characters suffer many consequences as relationships flourish even more passionately than usual. The episodes are divided by the hours passed in the attempted robbery, each and every second counts in the lives of these characters. It is a life or death situation. Intertwined loves stories, kicking fear in the chest, and staring at death straight in the face are common circumstances that follow the characters in this series.

On the surface, ‘Money Heist‘ is just another crime series with its characters looking invincible carrying machine guns waiting for their enemies to arrive. But in reality, the series is about people, specifically those in society who do not hold opportunities, who have to dig their path and make a stand against the system if they ever want to get ahead. And a group of people who will always fight, and will never surrender.

Hold Your Breath With Me

If you’ve had the opportunity to watch all the four seasons before, you know that you are basically sitting on your couch screaming at the police, hoping they are not the final winners. The series has you always rooting against the system. After season two, the series becomes an ally towards the resistances and portrays their side of the coin. How hard they got it, and how bad they want to help each other. The reason behind the bloodbaths and rebellion makes total sense, and not for a second do you doubt the situations, nor the characters’ behavior.

‘Money Heist‘ shoots for higher-stakes and more intense drama than your typical series. If it were a reality, the series becomes a sort of social experiment. It is a TV version of ‘The Stanford Prison Experiment,‘ where the behavioral reactions are the lead characters, and power struggle is a major theme explored. ‘Money Heist‘ is a Bonnie and Clyde on steroids because it contains a thousand more love stories and shooting scenes.

It’s been five years since the first episode of ‘Money Heist‘ or better known to its Spanish-speaking audience as ‘La Casa de Papel,‘ was released on Netflix. The acclaimed series still keeps its audience hair on the back of their neck raised. After five years, you would think that the writers would be short on plotlines, probably repeating what we’ve seen in the past four seasons, but the series has found the right path for its story and characters to go. If anything, I believe the series gets better with every season that passes by.

The Heist, The Women, And The Sexism

‘Money Heist‘ is not a show that is opted for kids, but I am happy that the sort of women depicted in the series is strong, independent, fierce, and incredibly stubborn. Because that’s the type of woman I would’ve liked to see and look up to when I was growing up. Women here are not the weakest link but the leaders and are often associated with courage. Although there is the typical sexist man, as the series focuses on their Spanish culture, and do not forget to mention the sexism in their reality. The women in ‘Money Heist’ will never keep their mouths shut, as they have many things to say.

Needless to say, the female characters are rooted in a gut-wrenching drive, as they are often the characters to find the perfect solutions and are not afraid to execute them. The dialogue between the characters is incredibly realistic, it contains comedy, pain, and lots, lots of cursing (which takes us back to the realistic, as Spanish people tend to curse quite a lot, and we love it). Alex Pina does an amazing job understanding and showcasing the difference between men and women, because the personalities are obviously complex, and he finds how to embody it well with each and every character.

It’s Been a Nice Ride

It’s been a fantastic ride from the first season to its, now, fifth season. I believe it is incredibly cool to watch a gun-dancing battle every now and then. Those scenes make you hold your breath with them, afraid that you might shoot your accomplice if you accidentally let some air go. Although, you have no actual weapons, it is just your couch and your eyes glued to the TV. Throughout the episodes, I kept thinking my anxiety could never exist as a robber inside those banks. Although in my imagination, I am Tokyo, high-strung, courageous, and crazy. I am her, shooting that M-16 right against the system to defend the ones that I love and get a few billion in my pocket while at it.

The end of season four towards the beginning of the new season seems to drag interestingly, as the writers decided to approach those episodes focusing more on the character’s backstory than the heist at hand. The approach before had been to explain the plan ahead and excite the audience with the idea that the plan might fall through. But with this new season, we are suddenly bombarded with flashbacks, and pre-heist history. Although, the season does feel like the rebellious culmination of five years of fighting, I have great news.

Money Heist Season 5 – It’s Not The End… Yet

Cue the intense thriller music here because the series doesn’t stop with the final episode of season five. If you’re a big fan, this is excellent news, the fifth season is divided into two volumes. There will be five more episodes that will be released three months from now, on December 3rd. I will be holding my breath while I wait to find out what happens to Tokyo, Rio, Lisbon, The professor, and all the gang from ‘Money Heist.’