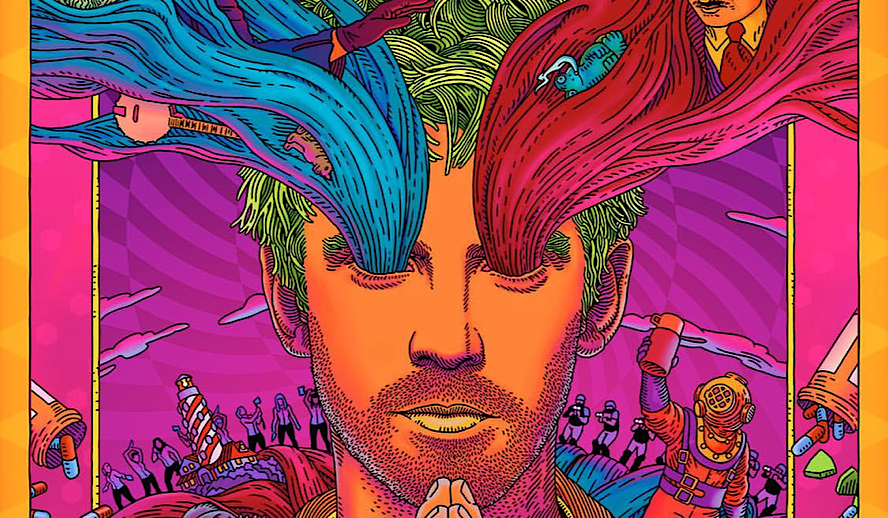 In 2017, Noah Hawley took a break from focusing on his hit crime drama television series, ‘Fargo’, in order to groom a new kind of superhero show for the world to experience. ‘Legion‘ was Hawley’s attempt at not only tackling the superhero genre, but experimenting on it as well, challenging some of the genre’s formulaic habits to test and expand the boundaries of its creativity.

‘Legion’, which aired on FX, the same network that also proudly broadcasts ‘Fargo’ like a talented child it can’t stop talking about, was based on the Marvel character of the same name. It was produced through the FX network and Marvel television studios, and centered around David Haller; an extremely powerful mutant from the X-Men universe who struggles with the deadly combination of mental illness and superpowers.

Related article: Episode I and II of ‘Jupiter’s Legacy:’ A Troubled Family of Superheroes

But unlike some of his superpowered contemporaries who save cities in costumes and capes on other superhero shows, when we meet David, he’s spending his days wallowing in a mental health facility. His true journey begins when he’s found by a group of fellow mutants who help him discover his mutant origins, while teaching David how to hone his telepathic powers. Powers that may be the source of his schizophrenia. The show’s innovative premise allows it to explore uncharted territory for the superhero genre.

Whereas the main focus in certain comic book TV shows is saving the city or the world, for ‘Legion’ saving the world is a subplot that takes a backseat to the more important dilemma; saving David’s mind. This results in an immersive and unforgettable story that challenges itself to think outside the box, and rewards audiences who think outside the box along with it. The script is well written and poetic. The dialogue is seasoned with meaning and double meaning that motivates you to read between the lines, designed to keep the viewer on their toes and constantly guessing the true intentions behind the people around David.

Dan Stevens, who played Beast in 2016’s ‘Beauty And The Beast‘, slides gracefully into the role of David Haller. Because of the depth of David’s disorder, at times it seems the actor isn’t just playing one character, but several characters fused haphazardly into one. There’s the kind, compassionate, and perpetually optimistic David, David the schizophrenic, David the romantic, and so on. Stevens is able to balance all of the wildly different emotions that David shuffles through with incredible talent, expertise, and finesse. He portrays the mentally ill with great attention to detail, nailing even the smallest nuances that come with suffering from his affliction with captivating realism.

In certain scenes, a nervous tic or a crooked, uneasy smile may reveal more about the character than several lines of dialogue. Simply put, Stevens as David Haller is one of the finest and most underrated displays of pure acting that television has to offer. Although Dan Stevens does a phenomenal job, his performance is rounded out by an extraordinary supporting cast that props up already quality material. Rachel Keller shines as David Haller’s mutant girlfriend, the detached and emotionally stunted Sydney Barrett, who complements the wild and erratic energy of Sydney’s significant other.

Whereas David Haller commands a more animated, aggressive performance from Dan Stevens, Sydney’s often cold, cautious nature requests a subtler touch from Rachel Keller that the actress effortlessly captures. Veteran actress Jean Smart flexes her acting chops with the role of Melanie Bird, who acts as David’s mentor that helps his transition from psychiatric patient to mutant savior. Aubrey Plaza is also able to hold her own with these acting heavyweights as Lenny Busker, David’s closest friend, confidante, and fellow psychiatric patient that’s weighed down by the same emotional demons that possess David.

Of course, a hero is sometimes only as good as its villain, and the villain of the series gives ‘Legion’ an almost horrific element that wouldn’t look out of place in a Wes Craven film. The villain is less of a person and much more of a force of the supernatural, akin to a Michael Myers or Jason Voorhees type, and preys on both David’s sanity and the sanity of the audience. The viewer is never quite sure if David’s visceral enemy is real or another reflection of his broken psyche. The villain, however, isn’t simply a character for David to overcome. Hawley treats his antagonist with as much respect as his main and supporting cast. The villain develops along with the protagonists in different, compelling ways, because in ‘Legion’ there’s room for growth even with the most sinister agents of evil.

‘Legion’, so far, is the first of its kind, as no other series in its genre has addressed the issue of mental health within the makeup of a superhero show quite like it has before or since. By linking David’s power with his mental instability, it raises the stakes, and it makes David as much of a danger to his friends as he is to his enemies despite noble intentions. Hawley holds a magnifying glass at mental illness. He demonstrates how severely it can impact people’s lives by weaponizing David’s disorder into potentially lethal powers, and shows how important it is for David to get the treatment he needs to keep everyone around him safe. What ‘Legion’ also does well is show that treatment itself is more than just medicine or pills. The most important treatment is support.

The support from family and friends is vital in David’s quest for peace, and the viewers see how adequate support, or the lack thereof, could have profound effects on David’s psychology with global ramifications. Like Daredevil, whose own physical disability gives him power, David’s mental disability gives him the potential to do great or terrible things, depending on the people he chooses to include in his inner circle. Despite the correlation between David’s mental health and his powers, the series does a fine job of not demonizing or vilifying the troubled mutant right away. Rather, it takes great effort in familiarizing you with David. The viewer gets to know David on a personal level, and as the series barrels towards its stunning climax, ‘Legion’ ultimately lets the viewers decide for themselves how they feel about its protagonist.

‘Legion’ Was Outside Of Its Time

The show had an aesthetic that added to its already curious mystique. There was no specific era or time period that ‘Legion’ took place in, which worked in the show’s favor. Without anchoring it to a particular decade, there was a certain timelessness to the show, as if the show itself was going through its own identity crisis alongside David. In certain episodes, ‘Legion’ looks like it could’ve aired fifty years ago and not look even the slightest out of place, while other episodes seem like they could air twenty years in the future and not feel outdated. Avoiding a timestamp helps submerge the viewer into David’s head even further, as the ambiguity of the setting comes from seeing the world through David’s own distorted eye.

Related article: Everything We Know About Season 10 of ‘American Horror Story’

During its initial run, ‘Legion’ didn’t generate the kind of buzz that other shows of its genre did. Whereas Marvel hits like ‘Daredevil’ and ‘The Punisher’ came out swinging, ‘Legion’, despite its initial hype, had a modest viewership on the FX network that often fluctuated in the midst of its run. The show’s first season had a bit of a slow burn in the beginning, and due to its non-linear nature, and its sometimes slow, methodical pacing, casual viewers might have lost patience and tapped out before mysteries were unraveled. But with the show having long reached its three-season conclusion, now would be the perfect time for a re-watch, since the binge format that’s become so popular nowadays would sacrifice the need for too much patience.

The show’s lack of popularity, although a shame, somehow made it a more intimate experience, as if David Haller and his friends were sharing his secrets with only a select few trusted people. At the same time, it’s a secret that deserves to be out in the open, as ‘Legion’ never truly received the recognition or reception its loyal fan base thought it deserved. Although it might have whimpered in popularity, quality-wise ‘Legion’ ended on a high note.

Each season had a distinct look and atmosphere to it that always made the show feel fresh, while never losing track of who it was and what it set out to do. ‘Legion’ did something that was truly different in a crowded market of superhero shows, and I consider it a forgotten gem that earns an honest, long and hard look from any fan of quality storytelling at least once. In the end, ‘Legion’ fulfilled, and occasionally surpassed its own grand ambitions.