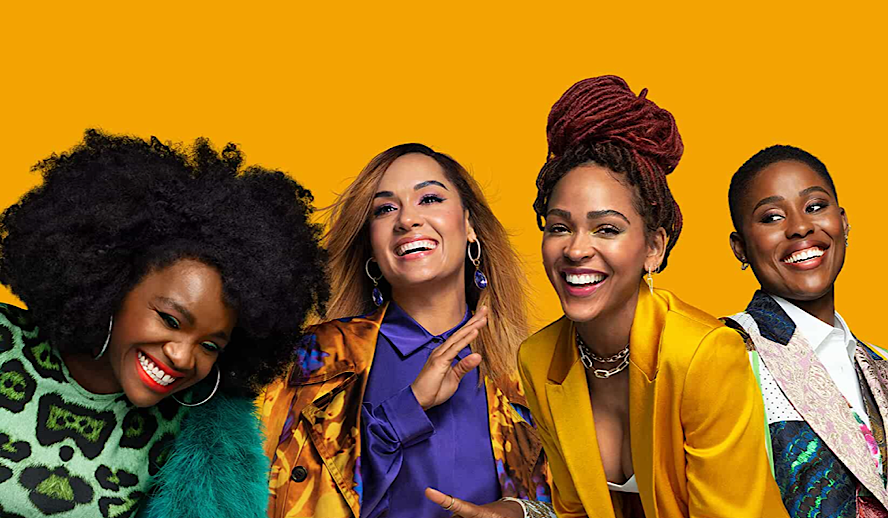 Numerous television shows have taken on the task of depicting friendships between females who are navigating life and relationships: ‘Living Single’, ‘Sex And The City’, ‘Girls’, and ‘Insecure’ to name a few. Even though I’m usually all for female-driven stories, when I heard about the new Amazon Prime original ‘Harlem’ I found myself asking “What could possibly make this one different?”

While it took a few episodes for me to get invested, ‘Harlem’ is a show with original storylines, deep underlying themes, and downright fun. Although the basis of it is not necessarily revolutionary, the show remains wholly entertaining and an easy watch. Don’t worry, there are still plenty of classic dating fails, awkward sexual encounters, and recovery from heartbreak, but there is more than that. “‘Harlem” is bursting with other themes — the depleting Black landscape of Harlem, sexual awakenings, hair care, and the ways Black creatives are often forced to sacrifice their scruples for a chance at success — but leaves enough juicy meat on the bone for a possible second season. It accomplishes all of these challenges while putting on a display of lavish costumes, detailed, colorful production designs — relying on teals, pastel pinks, and yellows — and allowing the luminousness of Black skin to be captured,” reviewed Indie Wire.

The Characters Residing In Harlem

The 10 half-hour episodes follow four Black women who became friends during their time at NYU despite their vastly differing natures. A decade later, the women are still as tight-knit as ever. “Each character grows more interesting as the series proceeds thanks to strong character development and sharp writing, and the chemistry among performers becomes the bond that carries the show as the women become entangled in each other’s respective relationship disasters and work dilemmas,” reviewed the Los Angeles Times.

Camille (Meagan Good) is an ambitious anthropology assistant professor at Columbia University striving for a tenure position. She seems like a shoo-in, which is good because she has made serious sacrifices for her career including ending a long-term relationship with her boyfriend Ian (Tyler Lepley). When Ian returns from abroad with his fiancee, stirring up old feelings, and a change in administration creates uncertainty in her career, Camille’s plans are not exactly going the way she imagined.

Creator Tracy Oliver understood Camille’s journey, especially since the character acts as a surrogate for Oliver’s story. She said to Variety.“With Camille and myself as well, I really thought that everything would just work out the way you wanted — and I don’t know where that entitlement came from…  Maybe getting lost in rom-coms. I really thought I was going to have a Julia Roberts or Sandra Bullock, except Black, existence. And it blew my mind when it was imploding so epically.”

Every episode’s theme is set by one of Camille’s lectures. The pilot, for example, focuses on the matrilineal society of the Mosuo Tribe, a Himalayan culture sometimes referred to as the “Kingdom Of Women”. While using her lectures as a plot device can feel a little on the nose, (like in a movie where the teacher just so happens to be explaining a book and relates to the plot), for the most part, it does adequately prepare viewers for the obstacles lying ahead. Camille is supported by her three best friends, Quinn, Angie, and Tye, who can (like Carrie Bradshaw and Co.) often be found gossiping around a restaurant table with drinks in hand.

Bougie fashion designer Quinn (Grace Byers) lives in an apartment which I can only dream of (a pink velvet couch, I mean c’mon!). Struggling singer Angie (Shoniqua Shandai) lives with her. She provides much of the comedic heavy-lifting without sacrificing emotional depth, especially when she begrudgingly auditions for ‘Get Out (The Musical)’. Lastly, Tye (Jerrie Johnson) is a tech mogul who created an app for queer Black singles. When she starts seeing a white woman she grows conflicted, asking herself how she can create an app supporting Black queer relationships when she herself isn’t doing that.

Variety positively reviewed the new series, saying, “When together, the core four ‘Harlem’ friends have a rapport that makes them easy to hang out with for the few hours the show takes to watch. Even when the script asks them to work in expository dialogue that sounds unnatural when spoken aloud, it otherwise leaves room for the actors to lean on each other’s performances to bring out the best in all of them.”

Intention Behind The Show

Tracy Oliver has a string of comedies exploring the lives and friendships of Black women, most notably ‘Girls Trip’ featuring Regina Hall and Queen Latifah. According to Variety, Oliver actually wrote this series before the film. “This is why this is such a passion project and so close to me. I wrote this for free; I wrote this because I had to — at that moment there was just something in me that needed to write something so personal,” Oliver said.

Oliver uses her own life as a jumping-off point, finding inspiration as many writers do from obstacles that she has faced herself. ​​“My best memories, my best moments romantically, creatively were inspired by the city. I lived in Harlem and just thought it was just so culturally rich. I fell in love with the people and I just felt like everyone was just so effortlessly cool [and] unapologetically who they are. I was still struggling to find myself in that period, but also I really loved the place and it pushed me to grow,” she said.

The show takes special care when exploring the lives of Black women and the issues that they face. In episode 7, Tye goes to the doctor for a medical emergency and is frustratingly misdiagnosed. “Black women are often systematically dismissed by medical professionals, leading to worse health outcomes. It’s a topic the series explores with great sensitivity and Johnson teases out to poignant degrees,” writes Indie Wire. Statistically speaking, racism, bias, and discrimination contaminate the health industry and ultimately fail to give equal treatment to racial and ethnic minorities. In fact, Black women are three times more likely to die from childbirth than their white peers.

Harlem Is The Fifth Friend!

If you’ve ever talked to a fan of ‘Sex And The City’, they are always quick to remind you that the city is actually a character in the show, a fifth friend of the group if you will. ‘Harlem’ is similar in that regard.

In a city that has a long and rich Black history, including the Harlem Renaissance, it’s a gentle reminder that Harlem has always been a Mecca for Black culture to thrive. This is one of the few shows that take on this 30-something living in New York with the lens of the Black perspective. Oliver said to Variety, “New York-set shows were literally gentrifying Black characters out of them. There’s a breadth of experience and diversity within even the Black communities.”

Gentrification is a common theme discussed in the show, one that previously white-washed series ignored. Landmarks are changing to chain stores and people are being priced out of their homes. “Do you think we’ll live long enough to see a Sephora change back into a jazz club?” Camille asks at one point in the pilot.

While some of the dialogue at times can feel a bit too expository, it doesn’t feel preachy. Just informative, which can be amazing as long as you don’t feel beaten over the head with it. Ultimately, the show is a charming addition to the female-friendship-over-cocktails narrative while providing some much-needed representation to the genre.