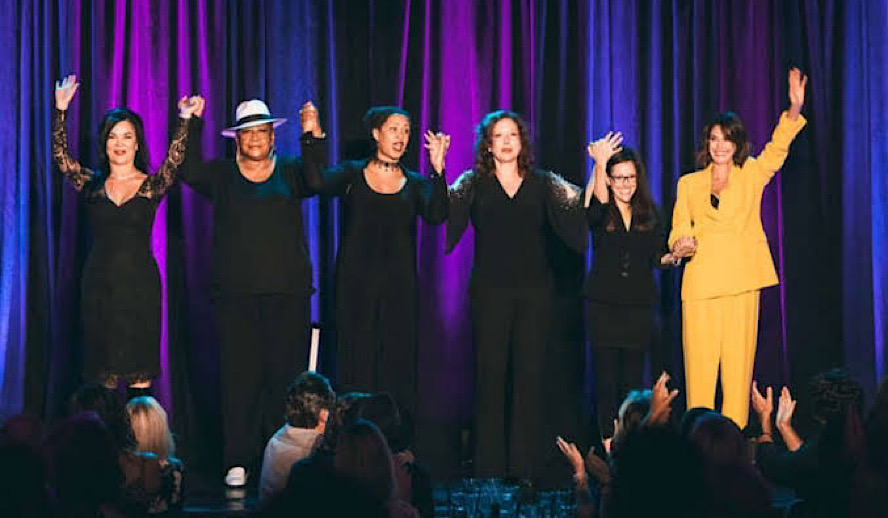 Photo: ‘Even More Funny Women Of A Certain Age’

Only recently has Hollywood started to depict the enormous impact women have had on comedy. However, it’s just the tip of the iceberg as their contributions have more punch than some like to admit. Thankfully, albeit slowly, comedy is becoming less of a boys club and more inclusive to different genders, races, ages, and sexualities. While that’s a positive, females are still often overlooked even if they are well-established actors or stand-up performers.

Thankfully, in a three-part series from Showtime, this group finally gets a moment to shine. The newest installment, ‘Even More Funny Women Of A Certain Age’, is a night of stand-up featuring an all-female cast all above the age of 50.

Like many things in history, contributions that women made to comedy are frequently lost, buried, or forgotten over time. Comedy wouldn’t be what it is today without them and their brashness, bravery, and obviously, humor. “From Sophie Tucker, who got her start in Vaudeville singing racy songs, to Elayne Boosler’s self-financed 1986 special, ‘Elayne Boosler: Party of One’, to Ali Wong’s gritty depiction of pregnancy and childbirth in 2016’s ‘Baby Cobra’, women have long made their voices a vital part of the American comic tradition,” writes The National Women’s History Museum.

Burlesque was one of the first ways for a female comedian to try their hand at stand-up. The original meaning of the verb “to burlesque” was “to make fun of” and in the 19th-century burlesques were actually satires of upper-class theater. It provided regular people an opportunity to mock high-brow entertainment. According to Time, “Though some think the format goes back to Roman times, one of the most important early burlesques cited by Zemeckis was an 1869 show that combined the British Blondes, a troupe of scantily-clad chorus girls from across the pond, performing in American minstrel/variety traditions. Stripping wasn’t a part of burlesque for about another 50 years after that.”

Burlesque became a way for females to perform and while it became more of a visual entertainment over the years, women still found a way. Some of the trailblazing women of comedy include Moms Mabley, Sophie Tucker, Belle Barth, Phyllis Diller, Fanny Brice just to name a few.

These women were nothing short of revolutionary but they still had to find creative ways to do so due to societal norms. Phyllis Diller for example performed in a character: she wore wild hair and clothes, had an eccentric stage persona, and her jokes mainly revolved around her duties in the domestic sphere. She performed as such so that people wouldn’t focus on her looks, but rather on what she was saying. “I had to dress so that they couldn’t see any figure because I wanted to make jokes,” Diller said according to the non-fiction book We Killed: The Rise of Women in Comedy.

They paved the way for the future stand-up comedians of today, and some of their contributions have been fictionalized in popular shows such as ‘The Marvelous Mrs. Maisel’ and ‘Hacks’.

“If I had to choose between ageism or sexism, I’d take a pat on the behind any day, since that meant someone noticed me,” she jokes in the special. The topic is taken on by many, seeing discrimination now not in just one place but several intersecting aspects of life (as well as adding homophobia and racism for many of the performers to the already tiresome list).

Montgomery conceptualized this production in 2017 as a live monthly show in New York City. Despite recently ending a decade-long act performing in Las Vegas resorts, she found comedy club bookers resistant to giving her any time so she took matters into her own hands and took a team of talented women with her.

Just Call Them Comedians, No Need To Add “Female”

In the first 2019 special, Fran Drescher was the show’s headliner. Drescher is most recognized for her sitcom ‘The Nanny’ playing an iconically dressed Fran Fine. While she has worn many hats (including actress, producer, writer, and activist), a stand-up comedian is one that she didn’t get into until later in life. Drescher told Indie Wire, “When I do my half hour I want to go deeper into the life experience and find the humor in the darkness and despair. I think there’s a shift in female comics, and the way they tell stories, that include things they’re passionate about — whether it’s a sexual orientation, health, or relationships. I think as women, we’re starting to develop our own style and not just be like the men. That’s what I aspire to be.”

I can only assume how tiresome it must be to be a hardworking professional to only be asked questions about being a woman in a male-dominated industry. Much of the beauty in the specials is the distinctly feminine point of view that many of the comics use to their advantage, but it is still funny to all. These performers are well-seasoned comics with a long list of jokes to pick from.

There’s something very special about the series, it gives opportunities to deserving comedians that frankly are just not there. Even though people above the age of 50 have more life experience, and therefore more perspective and stories, it doesn’t necessarily equate to more stage time. Believing that it won’t appeal to a younger demographic, streaming platforms to comedy clubs ignore these talents. “It’s a shame. What Montgomery has pulled off with this franchise is the chance to remind Hollywood that these funny women exist and still have value,” reviewed The Decider.

‘Even More Funny Women Of A Certain Age’

Like the ones before it, ‘Even More Funny Women Of A Certain Age’ features acts from talented women. Besides Montgomery, this lineup includes Wendy Liebman, Leighann Lord, Monique Marvez, Marsha Warfield, and Teri Hatcher.

According to The Decider, “Teri Hatcher, known for her acting career and not her stand-up comedy chops, tops this year’s installment for both star power and the sheer curiosity that comes with watching an actress as they try their hand at stand-up.” The styles range between performers as well as their comedic presence. So if you don’t like one of them, that doesn’t necessarily mean you won’t find something you may enjoy later on in the special.

Although not every performance was my sense of humor, I found myself laughing at least once in every person’s set and enjoying the experience itself. It’s sad that it’s a radical act having all-female performers all above the age of 50. It’s sad that we have to carve out space for these comedians to shine when they are already established and have well-built careers. The least I can do is give them the respect and time they have rightfully earned.