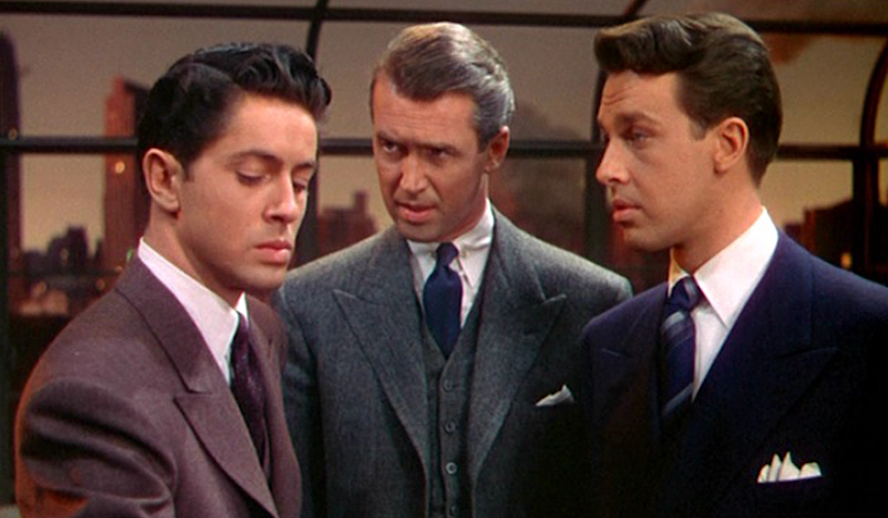 Everyone has heard of Alfred Hitchcock classics such as Psycho (1960) and Dial M for Murder (1954), even six decades after their release. His films are a masterclass in creating suspense with slow-building tension. Most of his well-known movies are the ones with old Hollywood superstars such as Princess of Monaco Grace Kelly and James “Jimmy” Stewart. One of his underrated classics, which we will unpack here, is a striking masterclass in moviemaking; his 1948 film Rope.

Rope can be termed as a “reverse whodunit”, as it starts with a murder which only the audience sees. They already know who did it, they’re waiting to see if anyone else figures it out. Two men, Phillip (Farley Granger) and Brandon (John Dall) kill their friend David (Dick Hogan) for the thrill of it and stage a grotesque dinner party with his family and friends, all the while hiding the body in the same room, as a sort of perverse experiment to prove their inherent intellectual superiority. This idea stems from the theories of their former housemaster Rupert (James Stewart) about how some people are superior to others and are therefore allowed to commit murder.

With the subject matter as seemingly controversial, Rope also has similar elements as Hitchcock’s other movies, such as elements of built-up suspense. It may be comparable to his other movies to the average viewer, but the style of filmmaking is what sets it apart from his other movies.

Rope is based on a 1929 play of the same name by Patrick Hamilton and has a 1 hour-20 minute runtime. The entire movie is shot in a single two-room apartment, with 90% of the movie in the main living room. It does not stray from the “play feel” on the big screen but incorporates elements of screen acting rather than stage acting. The filming is designed like one long shot with cleverly disguised cuts since in that day and age technology would not have permitted a true long shot. Keeping an audience engaged with such filmmaking attributes would be a daunting task, especially without the urgency of attention that a play commands from its audience. Hitchcock solves this problem with skillful scriptwriting by Hume Cronyn and Arthur Laurents coupled with his direction.

There are many artfully designed long shots of the set (which is set up in a play perspective with only three sides of the room visible throughout), showing us what is happening in both rooms simultaneously. The audience’s attention is directed by adding only the sound of the conversation he wants them to pay attention to. The camera work is innovative and engaging; there is a particularly notable shot with a swinging door on the left side of the apartment when we get flashes of what is happening inside between each swing. Hitchcock opened the door for future filmmakers in many ways in this movie, modernizing the art of direction.

The script is beautifully written and entertaining throughout. While an aura of suspense hangs over the whole movie due to what the audience already knows about the murder, the scriptwriters intensify the suspense by introducing certain scenes that up the tension levels higher. There are various scenes that are stressful only to the audience since only they are aware of the murder but seemingly inconspicuous to the rest of the characters. Phillip, the weaker of the two men, gets constantly rattled by the inane questions about the whereabouts of David from the party guests to the point of arousing suspicion. Brandon frequently gets carried away by his total lack of fear and drops clues as to the sinister purpose of the dinner, and various dinner guests veer dangerously close to accidentally discovering the body.

Developing characters in a single set with one long scene is a challenging task. Most plays also rely on different scenes in different “locations” to build each characters’ story. In spite of these difficulties, Rope has well-established characters with background, supported by the original play’s writing. Each character brings different elements to the movie: Mrs. Atwater is the comic relief, Janet is the love interest, Rupert is the antagonist, and so on.

The most interesting character is Brandon, the mastermind of the murder. He is clearly the stronger willed of the two, with Phillip being merely his accomplice. Throughout the movie, we are fascinated by his wanton disregard for basic morals and how genuinely he feels that he is superior in intellect than his dinner party guests. He continually drops hints alluding to David not being in the world anymore, with no fear of capture. Displaying his twisted sense of humor, he includes his former housemaster Rupert as one of his party guests, whose beliefs he was supposedly echoing while committing the murder, to add a challenge to the evening. Even though he is unlikeable and disturbing, the audience does not want him to get caught. Throughout the movie, the feeling of dread fills the audience as if they are the ones in that situation. At the same time, there is a curiosity to see what would happen if they do get caught and if anyone in the dinner party would be smart enough to figure out what is going on.

WHY THIS IS HITCHCOCK’S GREATEST MOVIE

Rope is a completely different cinematic experience than anything we usually see on the big screen. Hitchcock successfully blended the one-set, one-scene long play with his signature style of suspense-over-surprise in this unusually constricted setting. Most of his other movies have similar themes of focus on one particular set, but they have enough supporting scenes in other sets to not give off the feel of being in the same room for the entire length of the movie. In Rope, he takes his filmmaking to the next level. There also are a lot of interesting theories on how it had a cleverly disguised queer theme. If you are a fan of Golden Age Hollywood, it is well worth a watch.