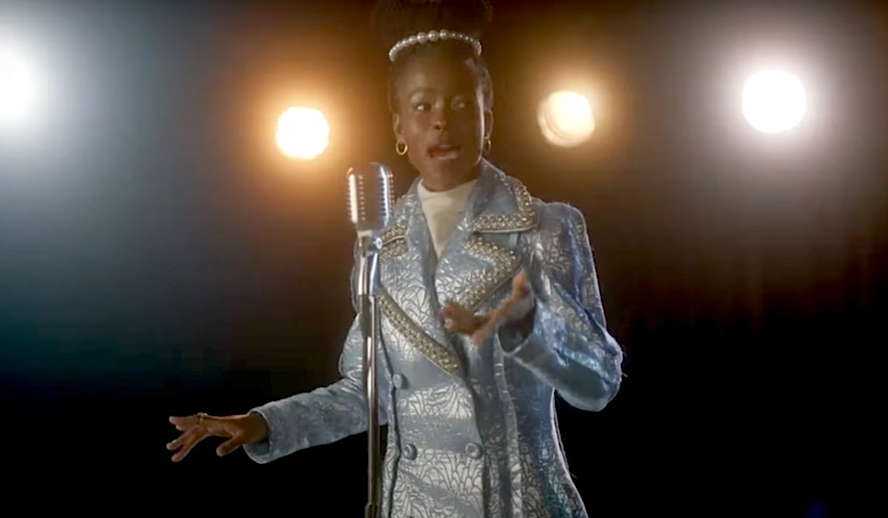 22-year-old Amanda Gorman made history again as the first poet to ever perform at the Super Bowl, just one month after her awe-inspiring performance at President Biden’s inauguration ceremony.

Before the coin toss at Sunday’s game between the Kansas City Chiefs and the title-winning Tampa Bay Buccaneers, Gorman recited her original poem, “Chorus of the Captains,” in a previously taped segment. Written to honor the three people who were chosen as honorary captains by the NFL, the poem highlighted their achievements and “tremendous impact during an unprecedented year.” The three honorees were Trimaine Davis, a teacher in Los Angeles who assisted his students in getting laptops for their remote education, Suzie Dorner, an ICU nurse manager in Tampa who works with Covid-19 patients, and James Martin, a U.S. Marine Corps veteran from Pittsburgh who volunteers with the Wounded Warrior Project and works with veterans as well as young people in his community.

Amanda Gorman at the Super Bowl

“All three were selected because of their dedication and selfless commitment to helping others,” a press release from the NFL said. “These heroes are symbolic of the thousands of health-care professionals, educators, and veterans throughout our country who continue to care for, heal and support those in need during this pandemic.”

The NFL had reached out to Gorman back in November, amid decisions regarding creating a ceremony that would be an accurate representation of the times we have been living through, in turn celebrating the people who have been serving their communities throughout it all.

“We knew that in order to honor them properly — and all of those across the country that they represent — we needed the right words that would match the power of that moment, and there’s no one more perfectly suited to bring those words to the world than Amanda Gorman,” said Matt Shapiro, the NFL’s vice president of events strategy, in a statement.

This is the first time that the Super Bowl has featured a poet, and Gorman acknowledged this in a tweet ahead of the show. “Poetry at the Super Bowl is a feat for art and our country because it means we’re thinking imaginatively about human connection even when we feel siloed,” she wrote. “I’ll honor three heroes who exemplify the best of this effort. Here’s to them, to poetry, and to a #SuperBowl like no other.”

“Today we honor our three captains / For their actions and impact in / A time of uncertainty and need. /They’ve taken the lead, / Exceeding all expectations and limitations / Uplifting their communities and neighbors / As leaders, healers, and educators,” the poem began. She went on to mention the three heroes by name, discussing both their struggles and leadership during the pandemic.

Prior Achievements and Rise in her Career

“Chorus of the Captains” was yet another moving example of her astonishing work. In January, she quickly rose to fame thanks to her memorable performance of “The Hill We Climb,” which she recited at the presidential inauguration, becoming the youngest inaugural poet in history. Her words and the grace with which she presented them wowed audiences from all over and has only led to a rise in both her fans and career path.

Born and raised in Los Angeles, Gorman began writing poetry at a young age and found it a “lifeline” as she has used it as means of overcoming a speech impediment that she has struggled with throughout her life. The Harvard graduate went on to become the first National Youth Poet Laureate in 2017, an honor bestowed by Urban World, which supports Youth Poets Laureate in more than 60 cities, regions, and states nationally. She went on to receive invitations to perform at the White House under Obama, and for Al Gore, Hillary Clinton, and Malala Yousafzai, additionally speaking at venues including the Library of Congress and Lincoln Center.

Gorman has received praise and recognition from Scholastic Inc., the Glamour Magazine College Women of the Year Awards, and the Webby Awards, and has also written for the New York Times, Vogue, Essence, and O Magazine, additionally penning Nike’s 2020 Black History Month campaign.

She was additionally praised on social media by former President Barack Obama, Oprah Winfrey, and Lin-Manuel Miranda (from whose work on “Moana” she derived a mantra for herself – “I’m the daughter of Black writers who are descended from Freedom Fighters who broke their chains and changed the world. They call me”), and also signed with IMG Models, one of the world’s largest modeling agencies, that represents names like Chrissy Teigen, Kate Moss, and Gisele Bündchen. IMG will develop opportunities for Gorman within the fashion and beauty sectors, areas she had previously expressed interest in during an interview with Vogue.

Gorman was also recently interviewed by former First Lady Michelle Obama for a cover story of an issue of Time Magazine, where the two engaged in conversation remotely for the magazine’s “Black Renaissance” issue, discussing a wide range of topics including how poetry can be “cool,” as well as how to navigate impostor syndrome as Black women in the spotlight.

“I would say anyone who finds themselves suddenly visible and suddenly famous, think about the big picture,” Gorman said. “Especially for girls of color, we’re treated as lightning or gold in the pan—we’re not treated as things that are going to last. You really have to crown yourself with the belief that what I’m about and what I’m here for is way beyond this moment. I’m learning that I am not lighting that strikes once. I am the hurricane that comes every single year, and you can expect to see me again soon.” She additionally cited several Black poets as her inspirations, naming Yusef Komunyakaa, Sonia Sanchez, Tracy K. Smith, and Phillis Wheatley as well as other non-poets such as Frederick Douglass and Abraham Lincoln.

After her inaugural performance, interest in Gorman’s work has seen a steady climb, and the Super Bowl only cemented the continued impact that she is having on audiences. Gorman has two upcoming titles scheduled to be released in September by publisher Penguin Random House, one of which includes a book of original poetry, titled “The Hill We Climb and Other Poems.” A special edition, “The Hill We Climb: An Inaugural Poem for the Country,” will additionally feature the powerful poem and will be published in print in March. The 80-page book will be Gorman’s first wide-release of a collection of her poetry, though she previously released a collection in 2015 titled “The One For Whom Food Is Not Enough.”

Also in September will be the release of her “lyrical children’s book” called “Change Sings: A Children’s Anthem” that follows the journey of a young Black girl. Illustrations by Loren Long, who previously worked on “Of Thee I Sing: A Letter to my Daughters” by Barack Obama, will accompany her writing in the picture book. Both of her forthcoming books have already made the top of Amazon’s bestseller list ahead of their releases – undoubtedly due to her dynamic poetry that has proved to be more than worthy of two of the biggest national televised events.

A charismatic performer and phenomenal writer, Amanda Gorman is certainly paving the way for a new generation, and in these challenging times, we can continue to return to her words that inspire hope and change in our society.

You can read Amanda Gorman’s full poem, “Chorus of the Captains,” below.

Today we honor our three captains

For their actions and impact in

A time of uncertainty and need.

Exceeding all expectations and limitations

Uplifting their communities and neighbors

As leaders, healers, and educators.

James has felt the wounds of warfare,

But this warrior still shares

His home with at-risk kids.

During Covid, he’s even lent a hand,

Live-streaming football for family and fans.

Trimaine is an educator who works nonstop,

Providing his community with hotspots,

So his students have all the tools

They need to succeed in life and school.

Suzie is the ICU nurse manager at a Tampa Hospital.

Her chronicles prove that even in tragedy, hope is possible.

She lost her grandmothers to the pandemic,

And fights to save other lives in the ICU battle zone,

Defining the frontline heroes risking their lives for our own.

Let us walk with these warriors,

Charge on with these champions,

And carry forth the call of our captains!

We celebrate them by acting

With courage and compassion,

By doing what is right and just.

For while we honor them today,

It is them who every day honor us.