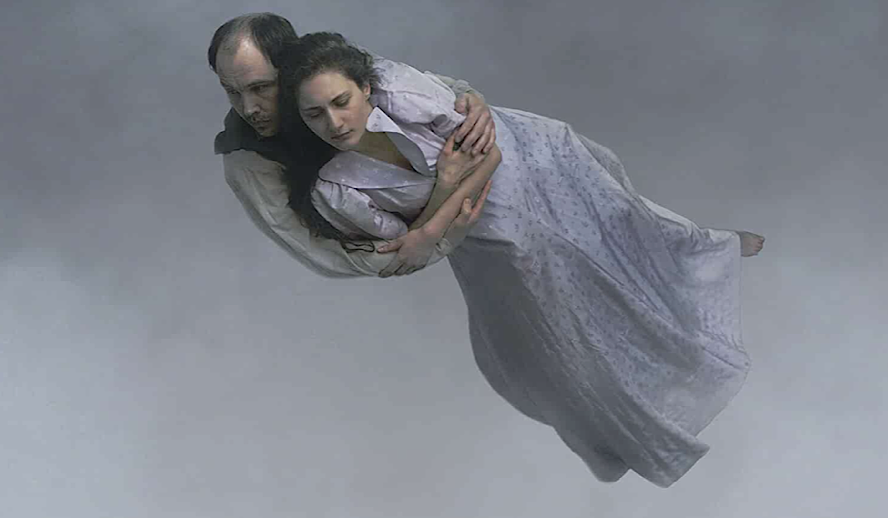 Filmmaker Roy Andersson could likely be the greatest director you’ve never heard of. Weighing heavily on the philosophic, Andersson is able to convey some extraordinarily poignant subtext in just a short vignette style of filmmaking. The Swedish auteur presents candid illustrations of mankind through evocative and unfeigned depictions of what makes humans so presently human and the moments in life that make you, individually you. This vignette approach affords Andersson a nearly limitless sense of scale, able to quickly move from protagonist to protagonist, purveying a sense of voyeuristic observance of a moment in time.
Andersson has presented that this film will likely be his final production, retiring from the film industry.

He leaves us with a touching farewell in the form of ‘About Endlessness,’ the theoretical sequel to his “Living Trilogy,” made up of three absurdist black comedies exploring the human condition. ‘About Endlessness’ is a truly breathtaking example of the capabilities of film as a medium, altogether. Andersson is able to say so much, while not really saying at all, granting us the ability to observe humanity at its most basic, intrinsic level. ‘About Endlessness’ is pessimistically beautiful, thematically unrivaled, and certainly one of the best releases I have seen in recent years.

An Initial impression of ‘About Endlessness’

Immediately after watching this film, you will likely experience a moment of pause. A moment in time where, prompted by the cinematic poetry that is an Andersson film, an introspective analysis is undergone and a judgment of your own character takes place. I suggest this result because that is exactly what happened to me. I was so moved by the exploration of the psyche that I began to exhume my own self-image, questioning if what I felt, believed, perceived, and rationalized were not some strange sense of self-dilution. ‘About Endlessness’ asks no questions, only poses answers. In a moment, through one action, Andersson is able to sum up a person’s entire existence and their entire being. This moment could be as minute as tying a little girl’s shoes in the rain so she doesn’t get wet, to the harsh depravities of wintery POW camps following WWII.

‘About Endlessness’ is not just poignant in its themes, but also in its visual elements. Andersson has one of the most unique visual styles in all of film. He implements an absolutely dreary color pallet, mostly consisting of hideous greys and browns, to give a decayed, inhuman feel to the world, in general. An unsettling decision to saturate the scenes with light removes every shadow from the frame, forcing all the hideous details of humanity to the surface. ‘About Endlessness’ is one of the most stunning visual presentations I’ve seen in some time, maybe ever.

The only way to describe the production of a Roy Andersson film is obsessive. Each aspect of production is measured to the exact specifications of the director, each shot manufactured to his exact vision, every line of dialogue, every shot’s composition, it’s all obsessed over and perfected. ‘About Endlessness’ was filmed completely in a studio, with no outside set pieces, no on-location shoots, nothing. All in studio. Opting for a studio mock-up of his vision so he is able to obsessively curate the image, Andersson builds each set with meticulous care, presenting only the perfected outcome. The sprawling landscapes, city-scapes, and skylines are all handmade crafts on set. To truly comprehend the level of care Andersson takes, you must watch some behind-the-scenes footage.

This control over the production affords Andersson the capability to perfect his character direction and thematic execution, as well. The obscene level of attention to detail provides added benefit to the most conceptually insignificant scenes, bolstering them into subtextual dreamscapes exploring the most existential of life’s questions. A man sees an old friend on a Friday and says “Hello,” only to be ignored, then realizing he harmed the man in the past. Then, just as he comes to this realization, the man walks past, again. The intellectual context in this tiny scene is mesmerizing. The implications of the err of human consciousness stemming from the damaged moral compass are alluring, enchanting even. In every aspect of ‘About Endlessness’ Andersson’s intrinsic passion shines through, mightily.

Comparing ‘About Endlessness’ to Andersson’s other works

As mentioned before, ‘About Endlessness’ is loosely considered a sequel to Andersson’s most famous work, the “Living Trilogy.” Made up of three films, ‘Songs from the Second Floor,’ ‘You, the Living,’ and ‘A Pigeon Sat on a Branch Reflecting on Existence.’ These films are much more humorous than ‘About Endlessness’ drawing on the comedically bleak hopelessness that permeates throughout society. A man takes a woman a bouquet of flowers only for her to slam the door in his face, catching the floors between the door and the frame in ‘You, the Living.’ Andersson trivializes life, illustrating the comically dead-pan moments that make the modern culture what it is.

Many people laud the “Living Trilogy” as Andersson’s masterwork, a culmination of many years of effort, contemplation, and dedication. ‘Songs from the Second Floor’ is the most highly rated on IMDB with a score of 7.6/10, a highly impressive score for an experimental film, a genre which often draws many detractors for its avant-garde style and unique structures. The other two films in the trilogy do not score much lower, scoring 7.5 and 7/10 respectively. Andersson’s ability to consistently put out such beautiful work with such incredible overarching scale is a testament to his true skill as a filmmaker.

Roy Andersson rarely cites other filmmakers as influential on his craft, listing only the renowned Neo-Realist artist Vittorio De Sica responsible for 1948’s transcendent ‘Bicycle Thieves.’ Rather than film, Andersson champions the history of art and classical painting, which clearly reflects through his shot composition. His flat, wide-angle shot structure and monochromatic color pallet directly reflect the look and style of his painterly influences and personal interpretation of them.

Related article:  A Tribute to Mads Mikkelsen: How the Delectable Dane Conquered Hollywood

Andersson has listed “The Hunters in the Snow”, a classical work of art by Pieter Bruegel, as influencing his work in the “Living Trilogy.” A bleak and foreboding landscape of a snowy mountain town, highlighted by a few crows in the naked, menacing trees. In the foreground, there is the drudgery of human life, the labours of daily existence, the background, hundreds of people joyously skating on ponds of ice.  For ‘About Endlessness’ Andersson adapts the style of Edward Hopper, creating almost identical qualities of banal beauty, mirroring the painter’s signature style. “Hotel Lobby” (1943), “Morning Sun” (1952), and “Nighthawks – At the Dinner” (1942) are a near-perfect examples of the influence Andersson adapts from Hopper’s work. The paintings are minimal, wide, pale, and contextual. Each painting has substantial subtext within the hidden glances of its subjects, concealed religious milieu, and depicts only real, human subjects. This adaptation of classical art separates Andersson so far from his contemporaries, making his work precisely individual.

Roy Andersson is one of the final living auteurs on planet Earth. One could argue that there are still many filmmakers to be qualified as the “auteur,” but in truth, they do not adhere to the most basic principles of the theory, itself. An auteur is to have absolute control over the vision and evolution of the production. Today, directors afford a level of creative interference, be it from audiences, co-writers, the studio, etc… but the final product is almost never 100% one person’s vision.

Andersson is the omnipotent driver behind the entirety of his films. He uses cinema as a way to philosophize his own most deep-seated ideas and ponderings, granting us a glimpse into his soul. La camera stylo or, the camera-pen is the perfect description for Andersson’s work, as the camera provides us the most intimate interpretation of his ruminations imaginable. This personal cut is sorely absent from today’s cinema. Gone are the days of an artist pouring out his heart and soul into film, but thankfully, we still have Andersson.