‘Where The Wild Things Are’ and Childhood 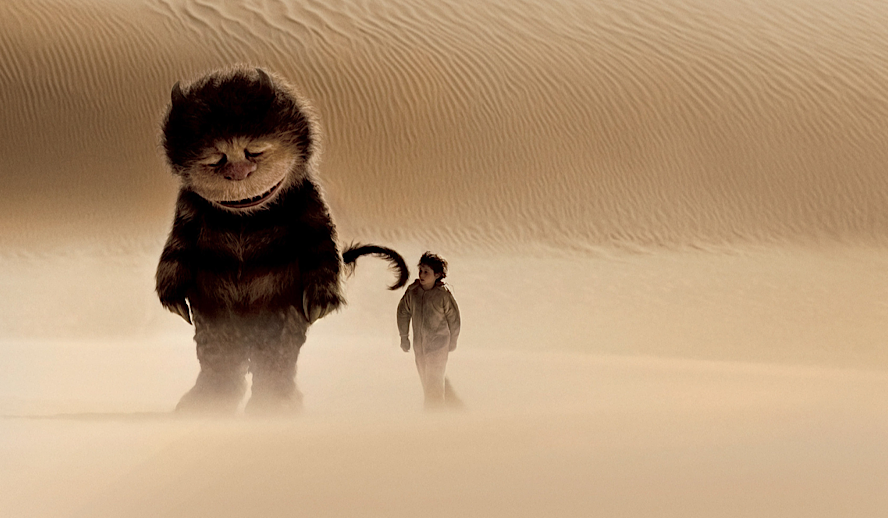 Photo: ‘Where The Wild Things Are’

‘Where The Wild Things Are’ is not your typical children’s movie. The film, directed by Spike Jonze of ‘Jackass’ and music video fame, is based on the book of the same name by Maurice Sendak. The book, originally published in 1963, is considered by many to be a childhood staple. With a legacy like this, the film was expected to be a huge hit in 2009. When the film premiered, though, with its darker mood and tone, it left audiences a little baffled. Audiences and critics didn’t know how to take a children’s film that was so dreary in tone, a children’s film that was so serious. While a good deal of may see ‘Where The Wild Things Are’ as a gritty adaptation of a children’s book, the film is an imaginative portrayal of what it is like to be a child.

‘Where the Wild Things Are’ – Let The Wild Rumpus Start

‘Where The Wild Things Are’ follows Max (Max Records), an emotional and misunderstood boy. His parents are divorced, his mother (Catherine Keener) is trying to re-enter the dating scene, and his older sister (Pepita Emmerichs) cares about him but is currently more concerned with keeping up her social appearance. After an especially hectic night, Max sneaks off to an imaginary land filled with monsters called “the wild things” and becomes especially close to one of them, Carol (an excellent James Gandolfini). As Max decides to stay in this imaginary land, the wild things eventually turn on him, letting their chaotic emotions get the best of them. Max eventually returns home, but with the spirit of the wild things still in his heart. Yeah, it’s definitely a strange movie, to say the least.

‘Where The Wild Things Are’ sets out to represent the feelings and emotions of childhood. While the film was criticized at the time for being too dark for children, the film truly represents what it is like being a child. The film may not have been for children, but it is surely a film about children, specifically the psychology of a child. Take, for example, the main story of the film, about a troubled boy in an imaginary land. Children often don’t know how to control or express their emotions since they are in their developmental phase. To figure out their emotions, children will often enter their own imaginations from imagining scenarios in their heads to playing rough as a way to release their tensions. This is exactly what Max does in the film. Max, who feels misunderstood and overlooked, creates a scenario where he is the king of monsters that are equally wild as him. He creates a wild rumpus for himself to be able to let loose.

The film smartly uses wild things as metaphors for Max’s emotions. The film could have easily made each wild thing represent someone in Max’s life, like a wild thing representing his father or sister, but the film instead takes a more complicated approach. The wild things instead represent different chaotic emotions that children often go through, from Carol’s anger to Alexander (Paul Dano) always feeling overlooked to KW’s (Lauren Ambrose) loneliness. The wild things even have chaotic emotions that one can compare to a child. In one scene in the film, Max expressed his fear to Carol of the sun dying. Carol reacts with denial, reassuring Max that they are bigger than the sun and can’t worry about small things. Max’s fear of the sun dying could arguably represent his fear of his childhood ending and thus this imaginary world ending. Carol, like a child who can’t grasp change, shares this fear but reacts in both denial and even anger. Max, at this point, doesn’t want the wild rumpus that is childhood to end.

‘Where The Wild Things Are’ tackles the universal feeling of growing up, specifically when one’s emotions mature. At the start of the film, Max lets his emotions get the best of him, affecting how he treats people and how he relates to the world. When Max is in his imaginary land, the wild things are equally emotionally intense as Max. They yell at one another when frustrated, throw dirt clumps at each other, and even rip each other’s limbs off. As the film progresses, though, the wild things and their emotions become more and more threatening. This represents Max realizing what can happen if he doesn’t get a better handle on his emotions. If he doesn’t handle them better, he can end up like Carol, driving people away and becoming a monster. The emotions of the wild things become threatening to Max because he begins to realize how irrational they can be. He matures to a point where these violent emotions seem more scary than relatable.

One of the best aspects of the film is how Max and the wild things try to express their emotions. Despite the wild things being covered in fur and scales, they act very human. They have human emotions and, like humans, especially children, they have a hard time expressing these emotions. They have conversations with one another where they will attempt to share how they are really feeling but will instead create child-like metaphors as stand-ins. In one scene of the film, Carol expresses his fear of change, specifically his friendship with the other wild things falling apart. Instead of admitting this to Max, Carol instead says, “Do you know what it feels like when all your teeth are falling out really slowly and you don’t realize and then you notice that, well, they’re really far apart. And then one day, you don’t have any teeth anymore”. This quote perfectly encapsulates that feeling of things falling apart around you over time. That feeling of change happens over time.

Max changes throughout his stay in the imaginary land. Not only does he recognize the potential dangers of his unchecked emotions through Carol, but he also grows up. When Max decides to leave his imaginary land to return home, this is Max deciding to face his issues instead of running away. He is making his first grown-up decision. As the wild things and Max share one last howl together, Max is having one last burst of his childhood innocence. One last burst of childhood emotion. One last burst of pure chaos. After this burst, Max returns home to his mother, where he makes amends with her after their turbulent fight. By making amends and returning home, Max enters a new phase of development. He is not grown up yet since he still has a lot to learn, but he is taking his first steps in coming to terms with the inevitability of growing up.

‘Where The Wild Things Are’ is a truly fantastic film that is not like any other children’s movie. The film is an emotionally mature and even profound representation of the chaotic emotions of a child, from feeling angry to being overlooked to being playful. The film is also a heartfelt portrayal of growing up, specifically when a child learns to become more emotionally mature. There are many stand-out performances in this film but the real heart is James Gandolfini as Carol. Carol and Max’s turbulent and close bond in the film is what really makes these complicated themes land so well. While ‘Where The Wild Things Are’ may have been criticized upon release, it really should be remembered not as a box office flop but as a beautiful film about childhood.

‘Where The Wild Things Are’ is available to stream on Tubi.