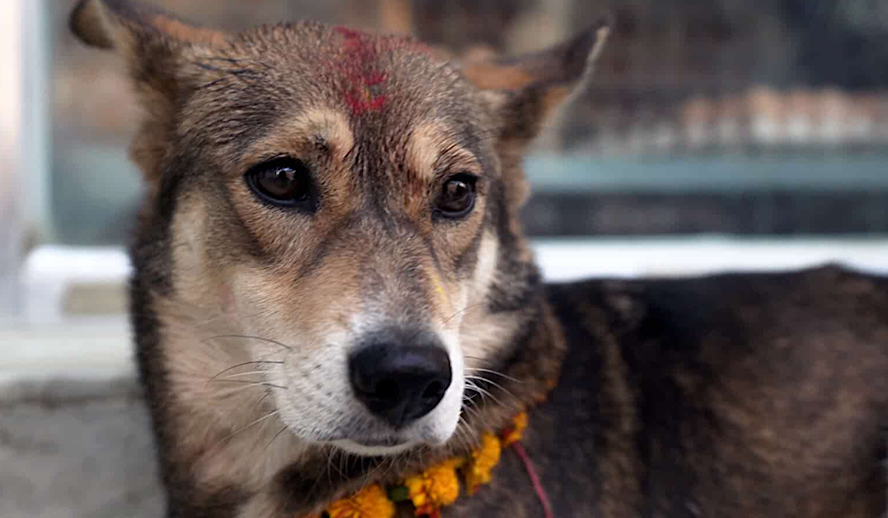 The above photo is of a dog in Nepal during the ‘National Dog Day’ Festival known as Kukur Puja. Nepal is the only country in the world where they have a day to celebrate dogs for their friendship and loyalty.

The Unconditional Love of a Dog

It is a universal truth that dogs are man’s best friend. With an unconditional, unwavering sense of love, dogs give what humans often cannot. They accept you for who you are, and love you for it too. They stand by your side, no matter what. They are kind and non-judgmental. As seen in one scene in ‘We Don’t Deserve Dogs’, where dogs in Finland help young children read, they do not care if you mess up a sentence or word – they are simple in awe that you can get through a sentence!

Related article: 10 Must-Watch Animal Movies – Pets in Film: A Look at What Animals Bring to Film

Related article: ‘Stray’ is a Heart-Wrenching Look at Society Through Its Stray Dogs That Don’t Have A Human Family

In this hour-and-a-half-long documentary, in which the filmmakers traveled to 11 different countries to document the position of dogs in various communities, we see dogs functioning in many different roles. They are workers, friends, kids, and therapists to the many humans who love and adore them. They can help with PTSD, anxiety, and loneliness – and they do it all with an air of nobility and genuineness. In these different facets of life, we also see how dogs show love in different ways, whether that be by being a furry friend to hug, a valuable employee, or a simple companion to combat loneliness. They can bind relationships and communities together, all without uttering a word.

And, unlike humans, they will always trust again – even if they’ve been abused, abandoned, or hurt in the past. This one reason sets the tone for the entire film, sets the reason behind its title. When it comes down to it, this is an undeserved love and loyalty that humans haven’t necessarily proved themselves worthy of. It’s a gift from dogs, who are in essence, better and purer than human beings. And with that, the documentary dives into the awe and appreciation we should have for these kind and gentle animals. For any dog lovers, this is definitely a film to look out for and perhaps watch with your own furry companions.

Something interesting that ‘We Don’t Deserve Dogs’ does as well is highlight the human companions of these dogs through focused character studies. From sheep farmers in Romania to a dog walker in Istanbul who walks up to 30 kilometers a day, people from all around the world are illustrated in this film. This is the main difference between this film and another popular dog documentary right now, ‘Stray’ by Elizabeth Lo, which feels firmly focused and rooted in the dog’s perspective. Comparatively, ‘We Don’t Deserve Dogs’ feels grounded in human perspective. Ultimately, the documentary gives us a glimpse into diverse lifestyles around the world. Through it all, we see how their furry companions help them through everyday life.

Particularly, ‘We Don’t Deserve Dogs’ touches on how dogs can aid people who are being discriminated against. For instance, we are introduced to a community of kidnapped child soldiers in Uganda, now grown. Upon returning to their villages, they were heavily ostracized, victim-blamed for their own trauma and participation in violence, even though it wasn’t by choice. In response, the village eventually set up a dog pairing program, where these individuals were given a service dog to adopt and take care of. The result was incredible, with many citing these dogs as “saving their lives,” ridding them of nightmares and helping them manage their PTSD. One woman spoke about how in their culture, you name a dog after your own true-life experiences. Consequently, she named her dog Lok Oroma, which translates to “you can’t hurt me.”

Without revealing too much about the film, there are a plethora of other stigmatized individuals in the documentary who are helped through their lives by having dogs as companions. As such, the film is not only an insight into how dogs and humans can save each other, but it’s a great look into humanity as a whole.

What ‘We Don’t Deserve Dogs’ Makes You Feel

The documentary has a very specific, heavy tone – punctuated by an unrelenting orchestra score from Blake Ewing that swells throughout the film. This is a pretty interesting choice, as it gives the film a very melancholy feel throughout. In fact, it’s pretty safe to say that ‘We Don’t Deserve Dogs’ isn’t a happy, feel good film. It’s heartwarming at times, but more than not it focuses on the fleetingness of a dog’s life, and the sadness that comes with that due to the amount of love and support they give humans. This love, of course, is personal and irreplaceable. The film almost feels mournful in a way, as if we are remembering these dogs’ contributions and cementing it in film, knowing that they won’t be around forever. At different points, interviewees even lament on past furry companions they’ve had over their life, which is characterized by equal amounts of affection and grief.

At one point too, the documentary focuses on the harrowing practice of consuming dog meat in Vietnam – another way that dogs contribute to their society. This is something they state is less popular nowadays, something very rare to see. However, even when it’s illustrated as a simple means of survival for these folks, it’s still very troubling to hear and difficult to watch. This is definitely something to consider when you’re thinking about watching this documentary. ‘We Don’t Deserve Dogs’ does a beautiful job of opening up one’s perspective and appreciating dogs, but at the same time, it is permeated with a very heavy, often sad tone. While there are moments of happiness and contentment, it’s hard to get away from this for too long.

That being said, the film does try to emphasize more positive themes, even when the sadness inevitably comes through. And maybe it’s just the simple fact that love cannot exist without pain, therefore there will be a lot of pain with the incredible amount of love dogs give. Ultimately, the takeaway from the film is summed up perfectly by a line a Peruvian teenage girl says in the film – “love is stronger with dogs because they teach us things that sometimes we forget about ourselves.”

‘We Don’t Deserve Dogs’ screened at SXSW and dozens of film festivals around the world. It is now available on all streaming platforms.