‘The Forgiven’: When Worlds, Uh, Collide 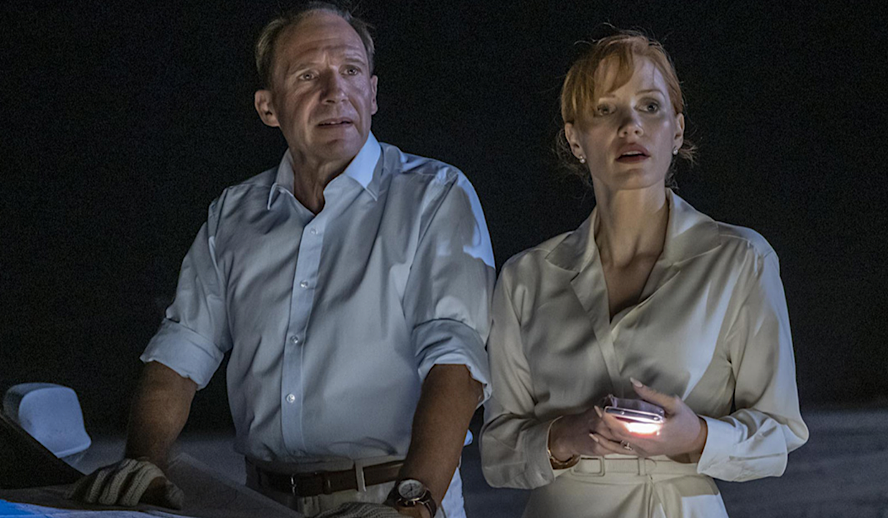 The People of the Worlds

‘The Forgiven’ gets most of its juice from the tension between its two worlds: the sneering, hollow world of the Western elitists and the conservative culture of the Muslim Moroccans. It’s a familiar device, but the mileage writer/director John Michael McDonagh squeezes from it is noteworthy.

These two worlds meet, unfortunately, with a bang, as the bickering Henniger couple speeds their way across the desert on the way to an old-school friend’s Moroccan compound. The friend, Richard (played by a wickedly good Matt Smith), is hosting a weekend of intemperance for him and all his sophisticated friends. David (a brilliant Ralph Fiennes) and Jo (a merely ornamental Jessica Chastain) are arguing about David’s alcoholism, in the routine sort of way indicative of a failed marriage, when they hit a boy selling fossils on the side of the road. This doesn’t exactly help their tattering marriage, and by the time they arrive at the lavish estate, the boy’s body splayed out in the backseat, word has already spread among the other partygoers. Richard and his American drunkard partner Dally (an underrated Caleb Landry Jones) usher them in with sympathy and drinks, as if they’d just suffered a flat. Richard and Dally insist that the shaken pair sidle into the party, that it will make them feel better while the police come by and sort things out.

We see why Richard and the Hennigers are friends: they and the rest of the partygoers are all equally boozy, salacious, and vain elitists. The guests can’t seem to stop telling us so, as they take turns eloquently expressing their own shallowness with pride in a very Gatsbian manner. “I like it here,” says Tom (Christopher Abbot). “It feels like a country where a useless man could be happy.” Despite the intentional unlikeability of the characters, the dialogue crackles among them. Tom, dressed as the god of the bacchanal himself, delivers some especially hedonistic zingers in flirting with Jo.

Soon, though, the slain boy’s father, Abedellah (Ismael Kanater) arrives with an associate Anouar (Saïd Taghmaoui) and insists that David return to their home to bury his son. This doesn’t go over well with David, who was rumored to have stirred some far-right naughtiness in his school days: “They might be f*****g ISIS for all I know.” But Hamid (Mourad Zaoui), Richard’s Moroccan butler, appeals to David’s humanity. David capitulates, and the three men rattle off in a Jeep into another, bleaker world.

‘The Forgiven’ – The Style of the Two Worlds

What follows is a swaying, gorgeously shot dance between the gross immodesty of the partygoers and the austerity of the desert. McDonagh ping pongs between awe-striking shots of Abdellah’s desert homeland and the colorful palettes of the stylish compound. If it weren’t for McDonagh’s dreamy transitions, it’d be hard to believe that the parallel stories are still set in the same country. The same sky David longingly looks for answers in, unsure of whether he’ll be killed or robbed, becomes the same one where his drunk wife and friends are watching scarlet fireworks explode. Another time, Abdellah’s simmering rage crossfades into a superficial party trick. Color and wardrobe, too, signify a lot of the contrast between the stories. Jo and the Westerners romp around in shimmering dresses and bright suits, while David wears his expensive white suit in a world where Muslim garb is the only appropriate attire.

We never have to choose whose “side” to be on in the story. The degeneracy of the Westerners and David’s initial apathy toward the boy’s father make it easy. But, in a strange way, the opposing storylines mirror a journey of self discovery, one of David’s unraveling character in the face of danger. And Jo’s, as she justifies her tryst with Tom as the realization she needs to eventually leave David by “thinking of herself for once.” McDonagh, adapting from the 2012 novel by Lawrence Osborne, has no compunction implying which one of these stories is worthwhile and real. The comparison is at times a bit overstated, but powerful nonetheless: the trivial issues we deal with on a regular basis are not to be championed or overly dramatized. Compared to a real life, they are a desert mirage.

The Dark Orthodox Morals of the Film

Before David climbs into the Jeep, off to Abdellah’s home, Jo asks him: “Are you sorry?”

As the title ‘The Forgiven’ might suggest, this is also a story about guilt. Fiennes’s performance,  reconciling David’s prejudice with the weight of his actions, buoys an otherwise heavy-handed writing. As David clatters his way down the road to perdition, he hardly looks at Abdellah, speaking only to Anouar. Through Fiennes’s hardened expressions, we see David clinging to his prejudicial views, refusing to feel guilt for a life he feels hardly qualifies as one. And indeed, throughout his journey into this world, the determination trickles from David’s face, as he is forced to come face to face with his actions.

Underneath the title in the movie poster is the line “Everything Must Be Faced.” It’s a line spoken by Abdellah a couple of times throughout the movie, in reference to David’s crimes. It’s informed by Abdellah’s deep Muslim faith, as the movie makes clear, but by no means does it seem to exclude the non-religious. Quite the opposite, we find out, to the extent of a father’s grief is tested against the denial of a prejudiced man.

McDonagh makes it clear that Abdellah’s religious condemnations apply for the whole cohort of Europeans at the compound. In doing this, he does a curious thing. The characters are deplorable from the jump, and we never come close to coming around on liking them, but ‘The Forgiven’ doles out judgment in a surprisingly explicit way. David, who’s emblematic of everything wrong and shallow about the West, becomes the only one who bothers to self-reflect, albeit not of his own volition.

This is no ordinary tale of repentance or self discovery — though it possesses some hallmarks of that type of film, like a symbolic change of garb — where the characters learn from their prejudice and grow because of it. Despite not being able to honestly apologize before leaving, David’s contrition comes spilling out of him at the end. Is it enough? You’ll have to see for yourself. But David faces his “sins,” meanwhile Jo and his friends continue down their familiar path. Their fates are intertwined, so insinuates McDonagh.

“Everything must be faced” is the last line of the movie, and you hear it in your ears as you walk out of the theater. If you see yourself in any of the Westerners, it might stick around till bedtime.