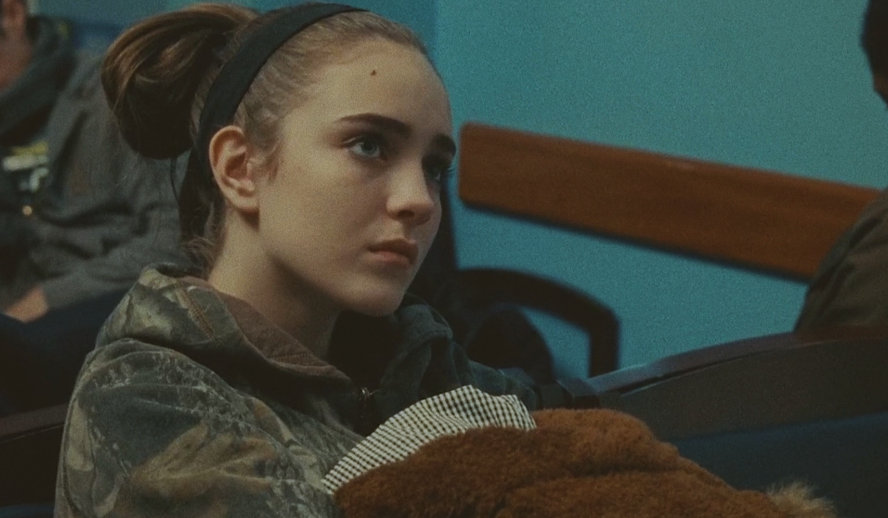 Two teen girls from a small town in Pennsylvania take a bus to New York City. They’ve saved up and stolen cash from their grocery checkout jobs, sneak out at the break of dawn, and meet a boy on the bus who they later rendezvous with for a night on the town. One of them, a singer and guitarist, has just pierced her nose at home while ditching school. They go to the big city searching for something that they just can’t get in their rural town.

This is not the film you think it is, although it’s easy to mistake it for a film about angsty teens rebelling against their small-town roots and going to the big city. This is Eliza Hittman’s third feature film, ‘Never, Rarely Sometimes, Always’. In a way, it is all those things above, only the something the protagonist can’t get in her small town is an abortion, which of course, changes everything.

Autumn, played by Sidney Flanigan in a great understated performance, is a quiet girl who can’t necessarily be described as shy (the first moment we see her she is performing in her school’s talent show.) After meeting little support at her town’s clinic, she sets out with her cousin Skylar, the promising Talia Ryder, to get a no-questions-asked abortion in New York City, where minors are allowed to do so. There, they face difficulties they are in no way prepared to face and spend three nights yawning and wandering the city with no place to sleep.

Through careful and sparse dialogue, great casting, and authentic performances, Hittman makes one thing clear: these characters are children. Their efforts to abort the pregnancy act almost like a symbol of trying to preserve this youth, but to do so they are paradoxically forced to grow up. Hittman’s film is both affective and effective: a touching coming of age story combined with a realist depiction of abortion and feminist issues.

When New York is the setting for a film, it often becomes a character in itself and acts more like a catalyst to unfolding events rather than a place they are happening in. Who doesn’t love the way Greta Gerwig glides through the busy streets of Manhattan in ‘Frances Ha’ against David Bowie’s “Modern Love”? Or the way Harry and Sally stroll through Central Park in the Fall and forever iconized Katz’s Deli? By contrast, The New York of ‘Never Rarely Sometimes Always’ is a place of sleeping at bus stops and in subways, figuring out confusing schedules, sharing a MetroCard, and sexual predators. Not being a New York native, it took speaking to a friend from the East Coast for me to learn how much of a zombie apocalypse connotation the Port Authority Bus Terminal has to it.

Not that I needed confirmation, Hittman makes it clear enough in the film that this is a lonely place. The girls’ petty cash from their part-time jobs could not possibly cover travel, three days in the city, and a medical procedure, but they face the consequences together. There are moments of charm when Autumn and Skylar get to be young girls: in an arcade spending money they probably shouldn’t be on Dance Dance Revolution, feeding each other on the subway, and in a bakery where they joke about their cakes. Hittman seems to be telling us these moments of purity and innocence matter and must be cherished by juxtaposing them among the grit of the city. None so much are as touching as when Autumn finds release singing “Don’t Let the Sun Catch You Crying” at a karaoke bar they don’t really want to be at.

But Hittman doesn’t stop there, New York is terrifying, but so is home, where the girls face creepy men constantly. Autumn’s own father carries an angry air and seems to constantly target her. The burden of being a woman will follow them no matter where they go and how old they are. The luggage they tug around for most of the film acts as a symbol of this burden. The girls are not naïve to this, it has already damaged Autumn’s fragile youth as we learn in an interview with a counselor.

Skylar makes a sacrifice in order to get them the money they need to get home. The hope is that with age and the freedom that comes with it, they will be better prepared to face the burden of being a woman as well as being one small spec in an enormous metropolis. For now, they take it one baby step at a time and all we can do is watch in admiration and desperation.

‘Never, Rarely, Sometimes, Always’ also succeeds in giving almost documentary-like coverage of the process of getting an abortion, revealing some dark truths as it does. Hittman doesn’t shy away from any details. Before the procedure Autumn gets two sonograms, the camera painfully capturing her remorse at hearing the dreaded heartbeat. She deals with the pain of having a dilator in her cervix. We learn her town clinic lied to her about how far along she was. Apparently a regular occurrence in rural locations, the abortion clinic worker is not surprised by the discovery, and Autumn will need a two-part procedure.

She meets with both a financial counselor, and a support counselor. In the scene that gives the film its name, we watch Autumn’s entire heartbreaking interview with the counselor. With a static objective camera and a few simple questions, Hittman succeeds in capturing the trauma of Autumn’s past in a scene that could pass as nonfiction. On the fateful day, we’re with her until she loses consciousness, and having witnessed the entire process, we want nothing more than to hold her hand as the guidance counselor does. Many celebrated the film’s PG-13 rating, praising that it will reach a higher audience of teens like Autumn who might have struggled through or are currently struggling through the same thing.

‘Never Rarely Sometimes Always’ received zero love from the Academy, but has a long list of other accolades including 7 nominations for the Independent Spirit awards. It is both timely and for all time, an honest portrait of the fleeting nature of youth set against the impossible backdrop of sexual assault and abortion in the United States.