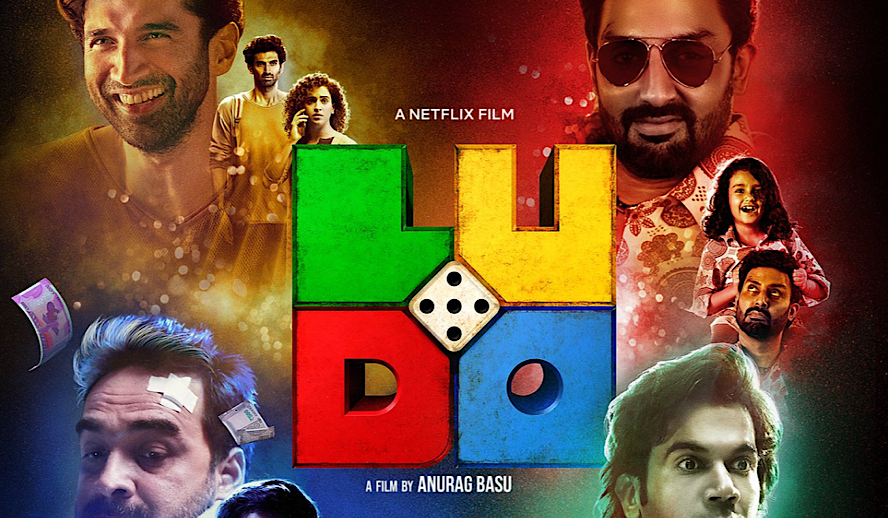 Ludo is a board game where each player rolls the dice to move each of their pieces back to their personal color-coded safe zone. It is a game based mostly on luck and circumstance. Did you ever think that Ludo could be a metaphor for life itself?

Ludo (2020) is a Netflix Hindi-language anthology movie with tones of dark humor and drama mixed together beautifully. It has an ensemble star-studded cast of Pankaj Tripathi, Abhishek Bachchan, Aditya Roy Kapoor, Rajkummar Rao, Sanya Malhotra, and Fatima Sana Shaikh. The movie features multiple storylines that intertwine and influence each other in different ways. It is written and directed by polarizing director Anurag Basu, who is also famous for the Priyanka Chopra Jonas-starrer Barfi! (2012).

The movie starts with a symbolic title sequence in which gangster Sattu Bhai (Pankaj Tripathi) is seen capturing various other characters, establishing him as the “dice” that controls the fate of the rest of the storylines. The sequence is set to the song Kismat Ki Hawa Kabhi Naram from the 1951 movie Albela, which is a great Easter egg. The song lyrics translate to “the winds of luck blow sometimes hot, sometimes cold,” which aptly sums up the movie’s spirit. The script illustrates how elements that are out of our control, such as luck and fate, affect our lives in ways we do not realize. The setup of the stories and the connections at the start of the movie are slow and deliberate, giving the audience ample time to process and follow the complicated storylines, as well as keep them hooked. Basu is famous for creating unusual setups with a deeper message for the audience to discover, which is also a part of this movie. The only issue with the script is that it stretches on longer than necessary, diluting the intended impact of the story. While Bollywood is famous for having movies with over 150-minute runtimes, certain scripts suffer the fatal flaw of overextending the story to meet that runtime expectation. Ludo suffers from the same issue; the script could have been condensed by about 30 minutes to ensure a proper flow to the conclusion.

A noteworthy aspect of the script is the light that was shone on the discrimination and ridicule South Indian non-Hindi speakers face at the hands of North Indians. Although this is sadly a very common phenomena, not a lot of Bollywood movies opt to raise this issue in their scripts. The way the discrimination was portrayed was jarringly similar to real life. It was subtly added in and portrayed as a common part of everyday life, its absurdity heightened by the darker tones of humor in the writing.

The casting for the movie is nearly perfect, as every actor performs their roles like they were meant for them specifically. Each performance has a quiet authenticity to it, bringing out the best of each actor. Pankaj Tripathi steals the spotlight, as usual, playing Sattu Bhai as a likable gangster placed in humorous situations. Abhishek Bachchan also gives a great performance as Bittu, his former right-hand man, although it is a bit too similar to his performance in the Amazon web series Breathe: Into the Shadows (2020). Rajkummar Rao excels as the loveable lover-boy Alok. The music by famed Bollywood composer Pritam perfectly compliments the movie and is suited well for a streaming service original instead of a theatrical release. The special effects could use some work, but the errors are ignorable since their unrealistic graphics end up adding to the humor.

Much deeper than it looks

The movie can be classified as “the butterfly effect in movie form.” On the surface, it seems superficial and comical, meandering endlessly amongst multiple storylines which seem to take ages to get to a climax. Despite this, the skilful writing hooks the audience, as they are constantly wondering what strange turn of events will occur and attempt to decode the deeper meaning behind the meandering plot. With two overarching unattached characters, Basu shines a light on what this movie is about: the essence of life and reality. “Life is like a game of Ludo,” one of them says; you play the dice and pray that that luck is in your favor. Some people seem to be untouchable whereas some people cannot seem to catch a break for no logical reason. The dice (Sattu Bhai) keeps spinning and the pieces (the other characters) move on and on in the quest for peace. The four storylines deal with greys of emotions such as love, societal pressures, perceptions of success, salvation, catharsis. Despite these subject matter’s serious nature, they are dealt with in a wholesome and heartwarming manner, keeping the movie light-hearted and thought-provoking at the same time.

With comical and absurd life situations, Basu also attempts to deal with morality-based questions. The previously mentioned unattached characters reiterate “what is sin and what is virtue?”. Who gets to decide what is good or evil? As one of the lines in the movie goes: “What may look like a six to you, may look like a nine to me.” Basu is telling the audience that all of these moral subjects are based on context, nuance, perspective, and viewpoint. The script emphasizes his point by weaving these questions into the different storylines, as a sort of case study into the complexity of moralistic decisions. The audience finds itself rooting for characters who are doing the “wrong” thing in their own personal perception of morality. They also feel empathy for certain characters who they may not even be able to relate to. The greatest thing about this movie is that it makes you introspect about these subjects without realizing it. The in-your-face and dark humor lightens up the subject matter considerably, saving it from garnering a preachy tone and turning off the audience. Bollywood does not usually produce content with darker humor, with only a few prominent movies in this genre such as Delhi Belly (2011) and Andhadhun (2018). Ludo, while not shy of a few faults, is a noteworthy addition in this genre in Bollywood and well worth a watch.