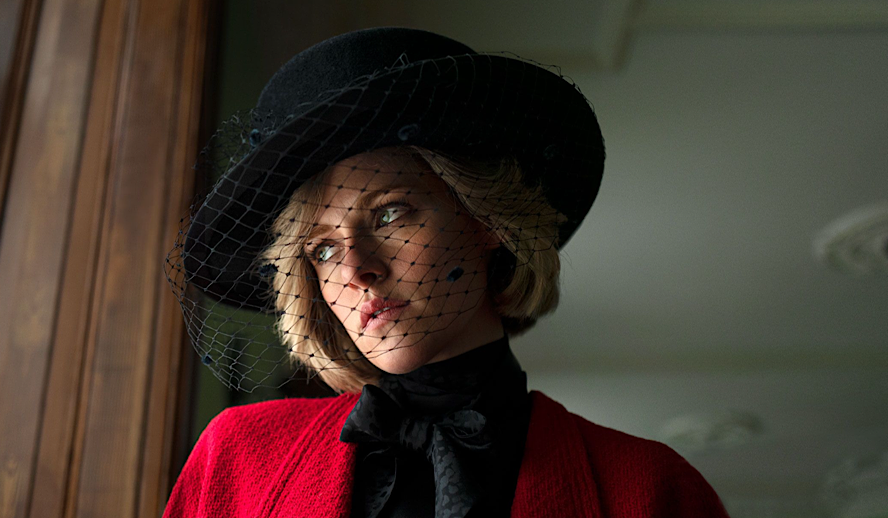 Most recently, photos have surfaced across the internet showing Kristen Stewart as a remarkable resemblance to the late Diana, Princess of Wales. It has been announced since then that Kristen Stewart will be portraying the “People’s Princess” in Pablo Larraín’s ‘Spencer’ alongside Sally Hawkins (‘The Shape of Water’), Sean Harris (‘Harry Brown’), Timothy Spall (‘Mr. Turner’) and more. The film will take place during a Christmas weekend in 1991 at the “Sandringham Estate,” a castle that began as a private country home to Queen Elizabeth II, whose father, King George VI, and grandfather King George V came to die at that very castle. The story will follow the inner break and Princess Diana’s ultimate decision to leave Prince Charles due to incompatibility and extramarital affairs.

With filming in mid-January 2021 at Schlosshotel Kronberg in Germany, the photos taken of Kristen Stewart show her styled with a blonde 80s hairstyle similar to that of Diana’s iconic haircut. With still little information, the events that occurred behind the Sandringham estate’s grand doors are unknown to anyone but those closest to the royal couple. It was not until 1992 when Diana and Charles would officially separate while still attending public engagements alongside their royal family, and it would not be until 1996 when the two would formally sign the papers for divorce.

In my opinion, director Pablo Larraín is one if not the best director to take on a project of depicting real-life royal events and bringing back the dead with honor. Larraín’s 2016 film ‘Jackie’ starring Natalie Portman (‘Black Swan’), Peter Sarsgaard (‘Shattered Glass’), Greta Gerwig (‘Lady Bird’), Billy Crudup (‘Almost Famous’) and more depicts the events of the assassination of President John F. Kennedy and how the bloodbath of trauma affected the strong-willed First Lady, Jacqueline Kennedy. Nominated for three academy awards, ‘Jackie’ is an astounding accomplishment of truthfulness, emotional growth, and female empowerment.

Screenwriter for ‘Spencer,’ Steven Wright, has experience in powerful wordplay with his works such as ‘Locke,’ ‘Dirty Pretty Things,’ ‘Serenity,’ ‘Eastern Promises,’ and more. The use of word choice and language is crucial with the significance and hierarchy of the royal family’s portrayal and, more so, the “People’s Princess.” For Diana, there must be a balance between strength and poise that reflects her inner stability to withhold such a substantial nature of kindness towards others even when she was wronged. The timing of using Diana’s voice or even the delicate word choice; I cannot begin to think of the time put into perfecting this as much as possible to honor the life of Diana while telling a real-life sequence of events.

As a child, Diana underwent the childhood trauma transformation of her parent’s divorce. At the age of sixteen, she would first meet her future husband, Prince Charles, who at the time was dating her sister, Sarah. Three years after they first met, Prince Charles would notice Diana; then, they announced their engagement only a year later. From the start, the media would publicly shame Diana for her outfit choices or by her weight, which she had suffered from eating disorders. At the age of twenty, Diana would marry Charles and a few months later would announce her pregnancy, which would later bring her son Prince William Arthur Philip Louis into the royal family. Her second child, Prince Harry Charles Albert David, would be born a few years later.

Throughout her marriage to Prince Charles, some events occurred that no healthy relationship would have. During her pregnancy, Diana fell down a staircase at the Sandringham Estate, which she later confessed was intentional to get Charles’ attention.

Still to this day, Princess Diana is admired and loved by anyone across the globe and is called the “People’s Princess” for a reason. She was undoubtedly the kindest woman, as depicted when she shook bare hands with a man suffering from AIDS in the 80s, a time when people believed it to be transmitted through physical contact. A few years later, she would sit at the bedside of a dear friend who died of AIDS and related illnesses. This is only a drop of her devotion and pure kindness that transmitted to anyone. She took her role as a royal as a way to show as much love to anyone as she could, and all while she was helping others, Prince Charles was having an affair.

In 1993, two years after the Christmas weekend that will be depicted in ‘Spencer,’ and three years before the official divorce, the “Camillagate” tapes were released. On these recordings, Prince Charles can be heard with his mistress, Camilla Parker Bowles, as he speaks of foul sexual indications between them. A few months after the tape’s release, Diana announced her plan to leave the public eye.

On August 30, 1977, Diana and her boyfriend, Dodi Al Fayed, were on the way to his apartment after dinner, that is until her boyfriend, and driver Henri Paul would tragically die on impact as the car crashed into smithereens. Diana and bodyguard Trevor Rees-Jones survive the initial impact and are taken to the hospital. On August 31, 1977, at the age of 34, Diana would succumb to her injuries and be pronounced dead at 4 a.m.

Diana’s remains rest at her family’s estate in Althorp.

Actress and director Kristen Stewart is an easy target for impressionists and comedians who go after her characteristics or little movements when she is acting. Most commonly marked upon are her hair grab and lip-bite that is most shown in her character Bella from the ‘Twilight’ series. The ‘Twilight’ franchise will and most likely forever follow Stewart due to the vast amount of attention it grasped. In an interview with director Clea DuVall, Kristen Stewart speaks about her acting style and how her roles are intuitively connected with her personal views. “I’m a pretty confessional artist. I definitely enjoy my work being as personal as I can make it. — I’m drawn to stories and people for a reason, and I think, by default, I represent what I stand for.”

For me, Stewart’s most incredible and underrated film is Peter Sattler’s ‘Camp X-Ray,’ where she plays a soldier assigned to keep watch of the prisoners. Throughout the film, she is assaulted and criticized by the male soldiers and is dragged through “shit,” quite literally, by the prisoners. That is until, and through time, she bonds with one of the prisoners named Ali portrayed by Payman Maadi (‘A Separation’). Released two years after the last installment of the ‘Twilight’ series, this film was the beginning of Stewart’s new start of showing the world her pure talent of originality and passion. ‘Camp X-Ray’ will forever be one of my favorite films simply because Stewart and Maadi create a bond between two individuals who are trained to hate each other but instead, they realize that “I don’t know if Snape’s a good guy. But I know you are.” It truly is a beautiful film, and Stewart is remarkable.

Stewart’s work experience is undoubtedly a range of pieces that show her ability to connect with a character and become them. As a young girl, she completed works such as ‘Panic Room’ or ‘Speak;’ films that are impactful and believable to anyone who can separate them from films and rather images of life.

In the interview with director Clea DuVall, Stewart gives a small peak about her struggle with perfecting Diana’s memorable accent and a sneak of her emotional attachment towards portraying the “People’s Princess” as a genuine person and more so a true woman. “The accent is intimidating as all hell because people know that voice, and it’s so, so distinct and particular. — It’s one of the saddest stories to exist ever, and I don’t want to just play Diana – I want to know her implicitly.” If anyone will show the grace, kindness, generosity, gentle nature, and strength that was within Diana, it’s Kristen Stewart.