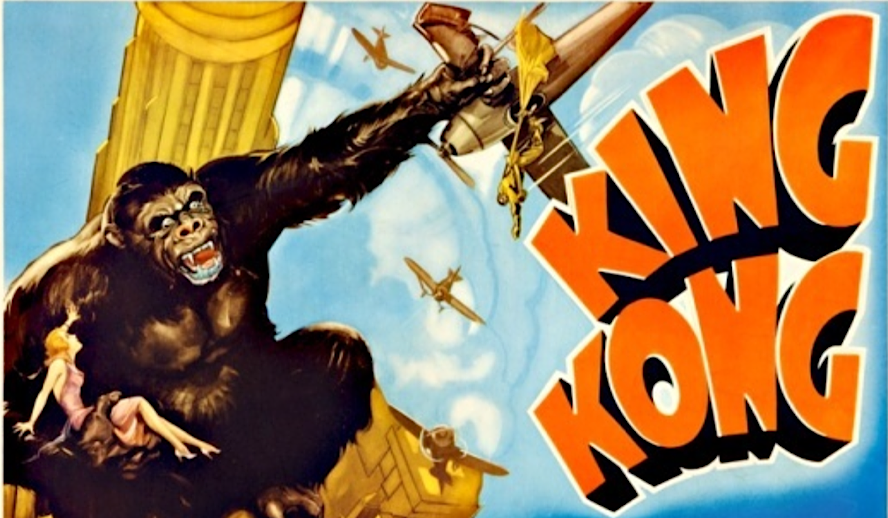 The Creature Who Inspired Countless to Come

‘King Kong’ is a film that needs little introduction. The image of a giant angry gorilla fending off biplanes atop the Empire State Building is one of the most iconic in all of pop culture. References and parodies can be seen across all forms of media. Ask any random person off the street who King Kong is, and even if they haven’t seen any of the movies featuring him, chances are they’ll have a passing knowledge of the character at the very least. The fact of the matter is, King Kong is a household name in its purest form. But how did something as simple as an abnormally large primate stand the test of time and become one of fiction’s most beloved and recognized characters? To answer that question, let’s start at the beginning.

What began as co-writer and director Merian C. Cooper envisioning a fight between a gorilla and a komodo dragon eventually shaped its way into what could arguably count as the first giant monster movie ever made. Starring Fay Wray, Robert Armstrong, and Bruce Cabot, ‘King Kong’ is the story of a filmmaker and his crew who travel to Skull Island and get more than they bargained for when they meet its inhabitants. Now, let me preface this review by saying that I’m not someone who’s spent their whole life being a die-hard fan of everything Kong-related. In fact, it wasn’t until recently that I was able to watch this film for the first time ever (A big thank-you to HBO Max for that). However, now that I have seen the film, I can safely say that it does indeed deserve the legacy that it created. Simply put, ‘King Kong’ is a very well-made film that I feel has aged incredibly well for a variety of reasons.

‘King Kong’ wastes no time in establishing its story’s characters: the filmmaker Carl Denham, Ann Darrow, the actress he hires, and Jack Driscoll, the captain of the ship that takes the crew to Skull Island. The pacing is on point; we spend just enough time before the trip to know what’s going on, and when the characters reach Skull Island, the film becomes tense and dramatic as they’re surrounded by danger of all sorts. The movie never feels rushed, nor does it ever feel like any of the scenes drag out for too long.

The acting is another high point in this movie. Everyone from the aforementioned main cast to the extras all do a very fine job. Robert Armstrong gives Denham a serious, yet kind-hearted demeanor, which is excellently contrasted by Bruce Cabot’s performance as the more rough Driscoll. Fay Wray, in what’s now considered her most famous role, sells her performance as the actor hired by Denham. There’s a lot of subtle heart to each performance, and it’s especially commendable for all the actors who took part in the special effects-heavy shots, as reacting to creatures that weren’t actually there was an impressive feat for such an early time in cinema.

‘King Kong’ features prominent use of stop motion for both the titular gorilla and the many dinosaurs that inhabit Skull Island, courtesy of special effects artist Willis H. O’Brien. The animation is frequently mixed in with live-action footage through the use of rear-screen projection, a variation of which O’Brien himself conceived. One of my personal favorite examples of this is a shot of Carl’s crew walking around an injured dinosaur. Despite being a stop-motion puppet, the dinosaur looks simply enormous when placed against the footage of the actors. But what really makes the special effects work is how they never distract from the story; at no point does it ever feel like the filmmakers are taking time away from the narrative to show off.

Another aspect of ‘King Kong’ worth mentioning is just how brutal it gets. This film came out during the Pre-Code era of Hollywood, and it shows. There’s little restraint regarding the violence on display, as we’re treated to scenes like Kong graphically ripping open a T-Rex’s jaw, crushing natives to death, and smashing a giant lizard’s head against the rocky floor of his cave. Scenes like these give the film some proper teeth; a creature as powerful and dangerous as Kong needs to be established as a genuine threat. This strong sense of edge also ties in with the film’s central message about tampering with nature. Sure, it would be cool to exploit this one-of-a-kind creature, but when it’s a highly aggressive, 20-something foot gorilla, is that really such a good idea?

To sum it all up, ‘King Kong’ is a film that earned its spot in film history through a compelling story, memorable performances, surprisingly intense action, and excellent special effects work. In today’s age, big-budget Hollywood blockbusters are full of realistic CGI and special effects, but it’s always important to remember the charm of old-school films such as this one. King Kong himself may not be photorealistic, but with the fact that this movie came out almost 90 years ago, does that really matter? Effects aside, there are plenty of other reasons to love the film, be it the sense of adventure that Skull Island brings, the ambitious, tension-filled direction of Merian C. Cooper and Ernest B. Schoedsack, or the exciting score by Max Steiner. Everything just comes together, making this a film that can still be enjoyed by newcomers such as myself to this day.

What’s also important to note is the legacy ‘King Kong’ left behind. I already briefly touched upon it in the opening paragraph of this very review, but the sheer impact this movie left behind cannot be overstated. Even setting aside the countless sequels, remakes, and spin-offs the original movie spawned, King Kong is a name that has echoed through the world of entertainment, and it’s one that just about anybody could recognize. I’ve known who the big gorilla was ever since I was a young child, which was long before I developed a fascination for the art of film. I picked up on the nods and references in all the cartoons I watched growing up, and I’m positive I’m not the only one. With the franchise still going strong with no signs of slowing down, ‘King Kong’ will forever be remembered for generations to come.