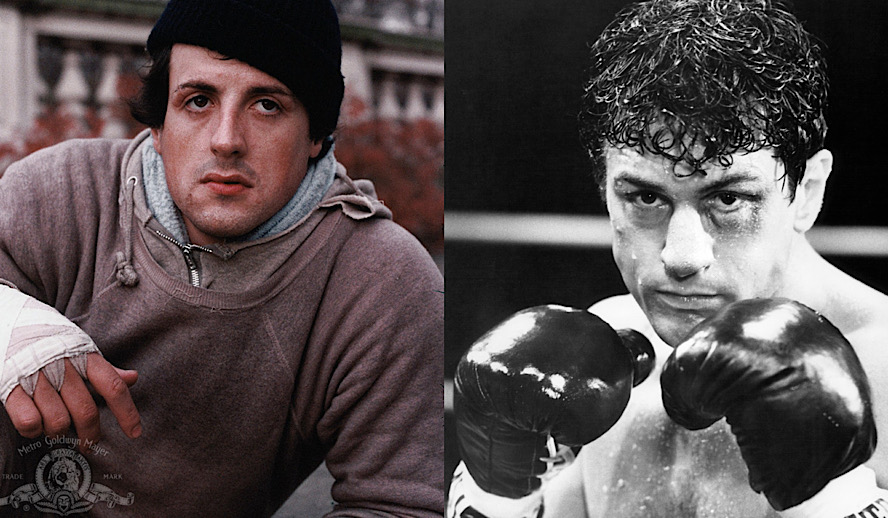 Since Robert Rossen’s ‘Body and Soul’ premiered in 1947, boxing has been the one sport that film directors always return to –  every decade has its own iconic boxing film. The vicarious thrill, motivation, and resilience that is part of almost every pugilist’s journey is the raw stuff that makes cinema interesting to people as normally, boxers come from humble origins, making their rise an ideal rags-to-riches tale. Also, unlike most sports, boxing has a degree of popularity everywhere and is based on the most primal instincts, therefore it can be understood instantly without needing to refer to a rulebook.

Let’s examine six great boxing movies of the past decades:

Luchino Visconti’s epic black and white narrative clearly echoes in many American gangster films as it has had an enormous influence on the genre. The intensity and honesty of the raw emotions, the purely human tragedy of the Parondi family, and the clash of Italy’s polarized north and south simply could not have been communicated better than through the medium of boxing, which becomes the turning point for the lives of Rocco (played by Alain Delon as he rose to stardom after the film) and his brother Simone. And just as boxing can be glorious or ruining, the stories of the brothers move more and more to the opposite sides of the winner-loser spectrum.

Without any doubt, if one had to name a single film that has defined the genre of boxing movies, or more simply, if one were asked what movie comes first to mind in connection with the sport, nine out of ten (more realistically, ninety-nine out of a hundred) would firmly name the Sylvester Stallone-starrer, and that would be true not only in Hollywood but all around the globe. After winning three Academy Awards and giving way to a franchise of eight films spanning over fifty years, the story that started with one average Joe boxer from Philly continues to churn out box office successes.

Even before the first ‘Rocky’ was released, the underdog tale had already been told a thousand times and more. Yet, at the heart of it, Rocky is grounded in realism and that makes people believe in the story and the characters, as its creator himself went through the struggles and obstacles depicted in the film and lived that tale in real life. In the early 70s, Sylvester Stallone was an aspiring actor trying to make it in the industry – very motivated but unknown and very broke, with $100 in the bank.

Yet, when the studio offered Stallone $360,000 for the script with the condition that he wouldn’t play Rocky, he refused and insisted that he himself should be in the leading role if the film was going to happen. The universal language of resilience and self-belief manifested in the film brought it to 4th place in AFI’s 100 Most Inspirational Movies list and inspired millions of people to hit the gym, punch the bags, or otherwise rise up to the challenges in their life.

The brutality of the fights pictured in Martin Scorsese’s acclaimed boxing opus is as unprecedented as the reason why Jake Lamotta enters the ring – to punish or be punished for his insecurities and jealousy. The inability to express and control those feelings damages everything that Robert De Niro’s character touches or comes across, first and foremost the few people who are close to him. This haunting story of a twisted notion of manhood, a bully mindset, and violence-inducing paranoia paints a disturbing, yet precise picture of a man’s capacity for self-destruction.

The film also marks a very special moment in Scorsese’s life. Before ‘Raging Bull’ was made, Martin was seemingly on a downward spiral due to the failure of his previous movies. He responded with the self-destructive act of immersing himself in drugs and alcohol, and that ended with him in a hospital room. When De Niro visited him there, the actor reminded him once more about this screenplay about a boxer being eaten alive by his demons and damaging everyone around him with his erratic behavior. Scorsese clearly saw himself in the story, decided to proceed with the film, and that later proved to have been the pivotal moment in the career of one of the world’s greatest directors.

The cold and minimalistic color palette of ‘The Boxer’ depicts the very human face of the dark times in Northern Ireland. Daniel Day-Lewis plays a former IRA man just released from prison, having served a sentence for a bombing that took place years ago. He tries to cut all ties with his troubled past and seeks peace through training kids boxing at a local gym, much to the dismay of his former contacts from the IRA. ‘The Boxer’ is not a movie particularly about boxing, but more a film about a man who uses boxing because he has very little else to cling on to as he tries to escape the noose that his old life has tied around his neck. Emily Watson, who plays Day-Lewis’s old love, also does a fantastic job and overall, the film is blessed with having those great actors, who create an unforgettable performance.

On paper, Ron Howard’s portrayal of Jim Braddock’s life story is the most overused plot and as predictably cliché as a Hollywood movie can get: A mid-level boxer suffers a career-stopping injury and he and his family begin a downward spiral in the grim times of the Great Depression; however, through sheer tyranny of will and with a little help from his friend, he miraculously overcomes (with his half-broken arm) one major upset after another and finally becomes the heavyweight champion of the world.

But that’s where the factor of having the right director accompanied by the right team makes a huge difference – every scene seems honest and genuine. You will want Jim to win every encounter and you will be immersed in his struggles inside and outside of the ring and the satisfaction that you will receive after his success will be almost primal. It also helps that the film is based on a true story and most of the Christmas miracle you witnessed on the screen has really happened in real life, and the power, grace, and grit of the American Dream have seldom been delivered in such simple terms.

‘Cinderella Man’ is the ‘Shawshank Redemption’ of boxing movies – every small detail and shot is in its rightful place in the film, adding up to perfection. Howard masterfully jabs the viewer with the right dose of sentiment through the whole film and, together with Russel Crowe’s outstanding performance, paints an unforgettable picture of a good man going through bad times.

Practically every boxing movie that was made after the ’80s owes a nod to ‘Rocky’ and ‘Raging Bull’, and Juho Kuosmanen’s award-winning film does that in its own special way: by introducing Olli Maki, a complete antipode of Jake LaMotta – the most modest, humble boxer that has ever fought for a world champion’s belt. Despite the whole nation expecting him to beat the American rival in the final, Olli is reasonably unconvinced by his own abilities and uneasily avoids being in the spotlight while trying to focus on the small charms of life and on his relationship with his sweetheart.

This documentary-like feature film builds expectations that make the viewer anticipate the same rubber-stamp ending that Hollywood has used over and over in its underdog-rising boxing movies – only to find, to their surprise, how different the Scandinavian prize winner’s mindset can be from the classical American go-getter mentality. I feel that is precisely what the film really has to say – how crucial those little things in our life are – and it finds a very special way to communicate that message through this heartwarming tale of true Finnish melancholy.