‘Baggio: The Divine Ponytail’: Should Come With A Label – ‘For Soccer Fans Only’ 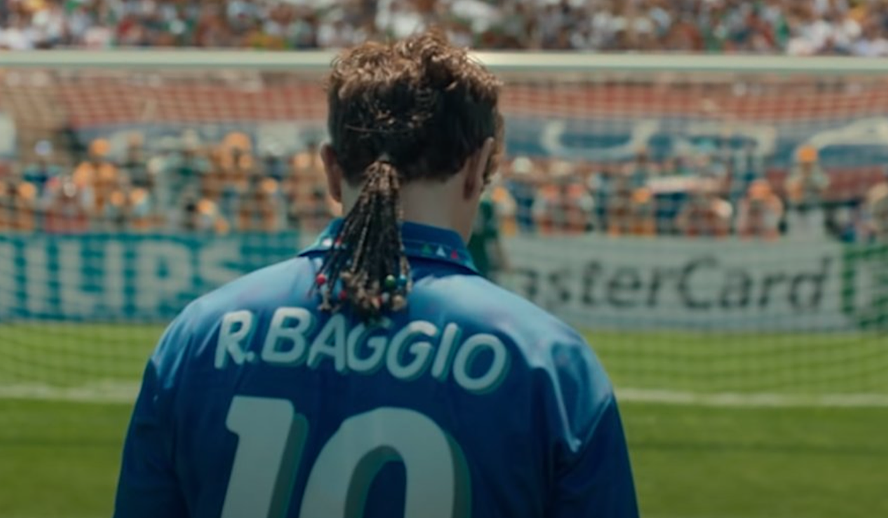 Knowing absolutely nothing about someone should not discourage viewers from indulging in the ever-revered and held to extremely low standards genre of the biopic. On the contrary, it is the job of good biopics to establish who the person was to the world and in a private sense to make a good case that this is someone we should care about. I cannot say with confidence that ‘Baggio: The Divine Ponytail’, directed by Letizia Lamartire, succeeds in this task.

Knowing absolutely nothing except the, for lack of a better word, divine love Italy and most everywhere in the world except the United States holds for soccer and the fact that the World Cup coincides with national identity, I was looking forward to a story about one such footballer and the significance of the eponymous ponytail to the world of Italian football. Instead, the film does the bare minimum and gets lost in its attempt to have some kind of universal spiritual message.

Andrea Arcangeli stars as Roberto Baggio, the Italian soccer player who suffered from a torn ACL at the young age of 18 while playing the club sector. Despite his early injury and the complications down the line, the film tells the story of how he succeeded in going to the World Cup but missed a key penalty goal in the final against Brazil in 1994. The missed shot haunts him for years to come, and despite being set to compete in the 2002 World Cup, he is excluded at the last minute. The film uses several time-jumps to skip over anything in between these three events. It also explores how Baggio found his Buddhist faith in a record store, and that’s pretty much the extent of its depth.

Once he has adopted Buddhism in one montage, his faith and the principles that come with it are not really given much importance. His wife is skeptical at first but after a six-year time jump, we see her as a devout practitioner as well, with no explanation of the path that led her there. We are told very little about who he was as a father and a husband, how he and his wife met, or any really important dynamics about their relationship. The performances are not bad, in fact, the cast does well in giving some color to a lackluster script, particularly Antonio Zavatteri as Arrigo Sacchi.

Baggio is one of seven children, which has had a huge effect on his relationship with his father, who (shocker) is at first unimpressed by his son’s achievements. A young Roberto is struggling to gain respect and approval, clashing with his classically mustached father on several occasions. These conflicts and feelings of neglect are mirrored in his relationship with the coach of the national team, Arrigo Sacchi. Sacchi knows Roberto is the most valuable player, yet he keeps his arrogance in check and never gives him too much credit.

This relationship dynamic is fine; however, the film is so obvious and so surface-leveled that another coach Baggio plays for later in life openly states that players often “tend to see their coach as their father. That’s why [Baggio] always has so many problems with them.” Another painfully obvious moment comes when a new “segment” of the film opens, six years after the 94’ World Cup fiasco. Roberto, now starting to go gray, is tending to a garden and sighs at a tree that is “just old and tired.”

After he is withdrawn from the 2002 World Cup, we learn that his father lied to him: that three-year-old Roberto never told his father he would win the World Cup against Brazil for him. When Baggio learns this, he can finally rest easy and enjoy the fact that he didn’t fail at his goal, that there never was one, he was trying to impress his father and in the meantime impresses Italy and the world. He is loved and adored by fans and that’s the end. In terms of character, it’s simply underexplored.

Maybe if we knew that child who breaks glass but doesn’t care because in his mind he’s just won the World Cup, or if his Buddhist faith actually led to changes in character other than writing down goals in a notebook, or if we knew what was going on in his wife’s mind, we would leave this film with a better idea about who Baggio is and why his ponytail is divine. Instead of a spiritual journey, it’s a bunch of generic don’t give up’s, shoot for the stars, anything is possible if you just believe fluff thrown out from pretty much every character.

The Problem With Biopics

There is an undeniable attachment audience members have with biopics. Because they are true stories and therefore respectable for being “not just a movie”, the average viewer seems to revere them as long as they fit certain criteria created in the past two decades. These include montages, the ironic moments where someone on the wrong side of history states a fact about the subject that we all know to be untrue, opening with a critical moment in the person’s career, childhood flashbacks, and endings where fate is met with peace and joy.

These trends lead more and more producers to believe biopics are easy tasks and will be watched no matter what. This leads to the toxic cycle repeating. Although they claim to be films about people, they are often films about things, the great exception being Coppola’s ‘Marie Antoinette,’ which is a film that refuses to even dip its toes into “thing” territory. ‘Baggio’ follows several of these clichés, which is actually not always a bad thing.

The moment where young Baggio’s goal through his father’s workshop window coincides with his epic failure at the World Cup is actually effective, but what is frustrating is that it is there for the sake of itself. We don’t know who this little boy is outside of this scene, it’s the only scene from his childhood. The spontaneous adoption of narration, of Roberto looking back on the World Cup, is also serving little purpose other than filling the biopic criteria.

Baggio: The Divine Ponytail is available to stream on Netflix.