‘Whose Vote Counts Explained’: A Must-Watch for All Americans 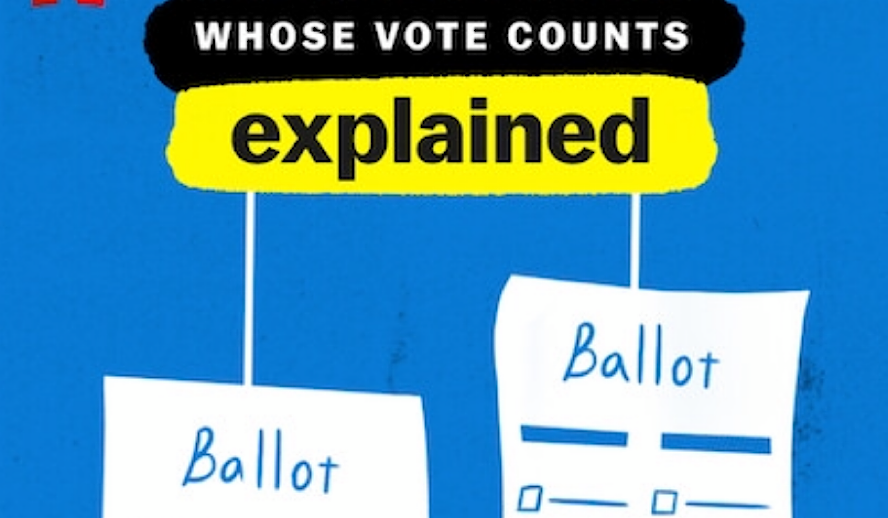 Every so often, I like to browse the Netflix menu and add things to “my list” to save for later. It’s been an especially common practice for me ever since the pandemic started, with my custom list of shows and films to watch growing larger the more time I spend inside. One series that caught my eye was ‘Whose Vote Counts Explained‘. I figured that if I’m going to be constantly watching things, I might as well learn something in the process. Especially when it comes to such a hot-button topic.

If you’ve been reading the news, you know that President Trump has denounced mail-in voting as a scam ahead of next month’s election. In the presidential debate, he campaigned for “solicited ballots,” which refers to requested absentee ballots. The unsolicited ballots refer to the ones sent automatically to registered voters in nine different states, as well as Washington DC. These are the ones that Trump has a problem with. On Sept. 10, he tweeted “Sending out 80 MILLION BALLOTS to people who aren’t even asking for a Ballot is unfair and a total fraud in the making. Look at what’s going on right now!”  Are mail-in votes actually fraudulent? Or is this just an attempt to discourage voting and undermine our democracy?

Whose Vote Counts Explained’ Should Be Mandatory Viewing

Eugene Kiely and Rem Reider from factcheck.org stated “…mail ballots will be sent automatically to eligible registered voters in only nine states and the District of Columbia. That’s about 44 million ballots — not 80 million — and they will be going to Republicans as well as Democrats and independents. Three of those states (Colorado, Oregon, and Washington) have done the same thing in past elections, and two others (California and Utah) have done something similar.”

Why is it a scam all of a sudden if several states have used mail-in voting before? If the person is registered to vote, why is it “unfair” to send them a ballot? As a DC resident, I was sent a ballot without formally requesting it, and I didn’t think it was unfair. In fact, I thought it was completely fair to not have to risk getting COVID-19 by going to vote in person. If the lies told by the Commander in Chief aren’t enough, Whose Vote Counts, Explained gives an in-depth examination of how important it is to vote.

The Series Promotes Voting, But Not For Any Specific Candidate or Party

The series consists of three half-hour episodes: “The Right to Vote,” “Can You Buy an Election?,” and “Whose Vote Counts.” The first one, narrated by Leonardo DiCaprio, analyzes voter suppression. It goes back all the way to our nation’s infancy when voting was considered a privilege, not a right. Only white men with money and land were allowed to vote back then. Since then, the process has become much more inclusive, but still flawed and unfair. Joel Keller from Decider writes “And even when they get the right, legislators (mostly white males) create laws to make it difficult — if not impossible — for those marginalized populations to actually cast a vote.”

What marginalized populations? An example is ex-convicts, a group represented in the episode by Florida resident Desmond Meade. He worked around the clock to get the state government to allow ex-cons to vote. Why should Meade and others like him have had to lobby the government to let them vote? They served their time, and are free citizens just like anyone else. It all leads to the ultimate point: why does voter suppression exist in the first place?

They said it best in the episode: “if your vote didn’t matter, they wouldn’t be trying to keep you from voting.” The Florida law against ex-cons voting as well as Trump’s inaccurate statement about voter fraud are two different ways of suppressing votes. The first is a formal way of not letting a certain group of people vote, and the latter is an attempt to discourage people from trusting the voting system. These modes of suppression aren’t used by accident, it’s because people in power don’t want citizens to vote against them, as they state in the episodes.

The series criticizes the outdated electoral college, explaining how the popular vote would be a fairer method to use in elections. I’ve had conversations with peers where they explained why they won’t vote because of the electoral college, and how it gives certain states an unfair amount of power. One of them said, “it’s a rigged game, so don’t play.” While I agree that the electoral college should be discontinued, I don’t think that disagreeing with it justifies somebody not voting.

At the end of the day, voting is how citizens can create change in a democracy. Electing to not vote because you don’t agree with the system doesn’t do anything to improve it, it only allows for stagnation. The reason voter suppression exists is that people in power often like to resist progress for the general population in favor of their own selfish agendas. Voting for candidates that are closest aligned to your ideals is the way to use your power as a citizen to fight against this suppression.

Let’s face it: this upcoming election is unlike any other. We are simultaneously faced with a global pandemic, climate change, systemic racism/inequality, and a lack of competent leadership in the White House. None of these things will be improved by staying home and watching the world burn. If you care about these issues, then use your power as a citizen and vote. We apparently have only seven years left to start taking climate change seriously, so go research which candidate does and which one doesn’t. If you’re not aware of which one is which between Trump and Joe Biden, then you’ve got some work to do. As Meade said, “Vote like your life depends on it.”