Mexico Grief’s the Death of a Legend – Vicente Fernández, the Mariachi King 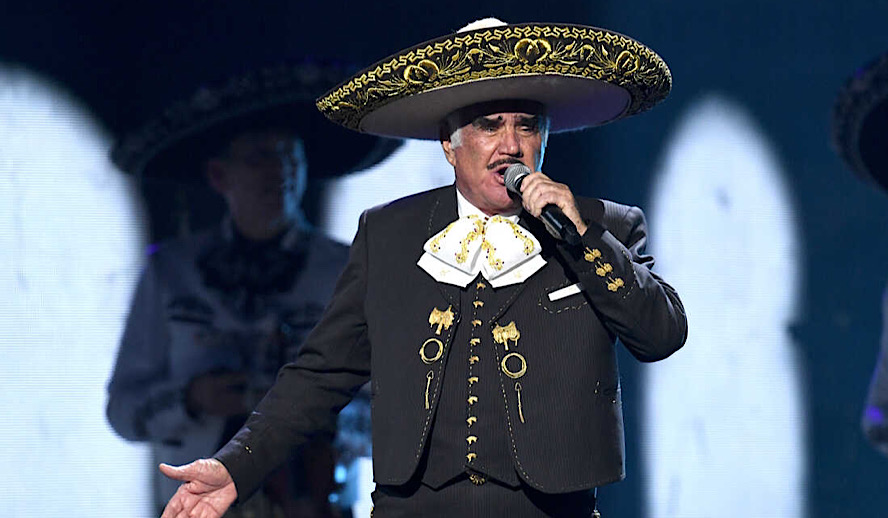 On December 12th, Mexico marked the end of an era, as the mariachi king, Vicente Fernández, passed away at the age of 81. Known as El Ídolo de Mexico (Mexico’s Idol), El Charro de Huentitán (The Charro of Huentitán), Chente, and El Rey de la Música Ranchera (The King of the Ranchera Music), the Mexican singer had a career that spanned fifty-five years. Vicente Fernandez was the voice of a culture, often representing the Mexican working class.

The mariachi king started singing as a young boy in the Village of Huentitán in the state of Jalisco, Mexico. After admiring the Mexican idols of his time, Pedro Infante and Jorge Negrete, he made a promise to himself and his mother to one day “be just like them.” Years passed, and that little boy kept his promise, taking his dreams further than he could ever imagine.

He began his career as any musician did at the time, as a street performer. Fernandez would sing Mariachi songs at restaurants, plazas, and bars for whatever tip they would give him. With barely any money to afford a stable living, Vicente would drag his guitar, day in and day out, to get his music out there. For seven years, Fernandez searched for an opportunity, and it wasn’t until the age of twenty-one that the singer was granted the chance to sing on national television, where he received a payment of thirty-five Mexican pesos. Vicente Fernández’s career felt like it began there, although slowly, as he still struggled as a musician. At the age of twenty-three, Vicente Fernandez married María del Refugio Abarca, known to the Mexican public as “Cuquita,” with whom he had four kids. Vicente Jr, Alejandro Fernández, Gerardo, and Alejandra.

“Volver, Volver” Launched Him To Stardom

After having his first kid and ten years of working with labels since, in 1976, the Mexican singer launched to fame with the song “Volver, Volver.” After that, Vicente Fernández went from a struggling mariachi to a worldwide ranchera superstar. Thanks to his success with music, Fernández had the opportunity to be part of the acting world.

He contributed to many films, such as ‘Por Tu Maldito Amor,’ ‘La Ley del Monte,’ ‘El Hijo del Pueblo,’ and ‘Mi Querido Viejo.’ Fernández used the opportunity to represent his music endeavors further, using the films as an introductory way to his music. In his movies, you would often find the titles of the films reflecting the title of the songs he had been working on. Thanks to these films, his image had been imprinted to the public, as he continued to play the same role, which was the stereotypical “macho” and “gallant” Mexican man; Vicente had a significant influence in Mexican Cinema.

The Sinatra of Rancheras

By 1991, Vicente was known not only by the Mexican public but by the world. The US press was now calling him the “Sinatra of Rancheras.” He collaborated with many other artists, and as his sons grew up, they desired to follow in their father’s footsteps. His father’s success was followed by Alejandro Fernández, who’s has had a long-lasting career thus far.

Throughout his professional life, The Mariachi King sold over 50 million copies worldwide, won three Grammy Awards, nine Latin Grammy Awards, and many other accolades while breaking records here and there. He even acquired a star on the Hollywood Walk of Fame as the first ranchera singer to accomplish this.

The Bad News that Had Mexico Hold its Breath

When four months ago, the news broke informing the public that Vicente Fernández had fallen ill, Mexico began to hold its breath. The media shared that Vicente had fallen from a horse at his famous ranch in Guadalajara, Jalisco, and had been hospitalized as he had injured his cervical spine. While at the hospital, the doctors had given him a concerning diagnosis, a syndrome called Guillain-Barré. The syndrome is known to weaken the immune system of whoever suffers from it, causing it to debilitate the lungs and the respiratory system. But with faith, his family and beloved fans prayed for the mariachi king to have a rapid recovery and return home.

Vicente Fernandez was hospitalized for two months before returning home at the end of October. But on November 30th, the Mexican singer had to be rushed to the hospital in grave condition. By December 11th, Vicente’s sons announced their father had been sedated due to a worsening of his condition. This time the Mariachi King did not make it home, and on Sunday morning, December 12th, the death of an icon was confirmed.

The Heart-breaking Memorial and Final Goodbye

Although the rumors of the cause of death are different, the family took to social media to announce the passing of their beloved father, husband, and Mexican legend Vicente Fernández. The events that proceeded were heart-breaking as the family was open and vulnerable to the public to mourn the loss of the patriarch of their family. A beautiful memorial was placed in his honor. Inside Vicente’s famous ranch in Guadalajara, Jalisco, Vicente Fernández’s casket laid, as fans waited in line to grant their respects and give a final goodbye to their idol. Mariachis played his songs in the background as he had requested previously, while his wife “Cuquita” laid her head unmovingly on the casket. That’s when Alejandro Fernández snatched a microphone from the mariachis playing in the background and began to sing “Volver, Volver” to his mother.

In Honor of “El Rey”

On that day and the days afterward, many tears were shed by all the people who loved him. Mexico has been mourning the unbelievable loss ever since. Every channel has taken the time to show a clip of his music with messages at the end honoring his contribution to Mexican culture. Stadiums celebrated the singer’s life by playing his music before games, as the crowd sang along with him. Mexican flags are being waved, tequila is being drunk, and chills are being felt throughout the week in which the Latin American public said goodbye to yet another icon.

Presidents, artists, and fans across the globe did not hesitate to share their condolences through social media. Mexico’s President, Andrés Manuel López Obrador, said, “I share my condolences to Vicente Fernández’s family, friends, and millions of fans, as he was a symbol of the ranchera song of our time, known and renown in Mexico and the world.” Former Colombian president, Álvaro Uribe, stated that “his departure hurts us and his legacy will be alive forever.” While the US president, Joe Biden, took the time to acknowledge the passing and stated that “the world of music has lost an icon.” Many other artists shared messages of remembrance and love, such as Beyoncé, Mario Lopez, Marc Anthony, Ricky Martin, Gloria Estefan, and Thalía.

His Music Will Connect Many Generations For Decades to Come

Vicente Fernández’s life can be considered a rags-to-riches story, as he accomplished the ultimate dream. He not only leaves behind his music and a legacy of musicians that are his family. But he leaves us with the memories that were created in our childhood and the gift of connecting different generations for many decades to come.