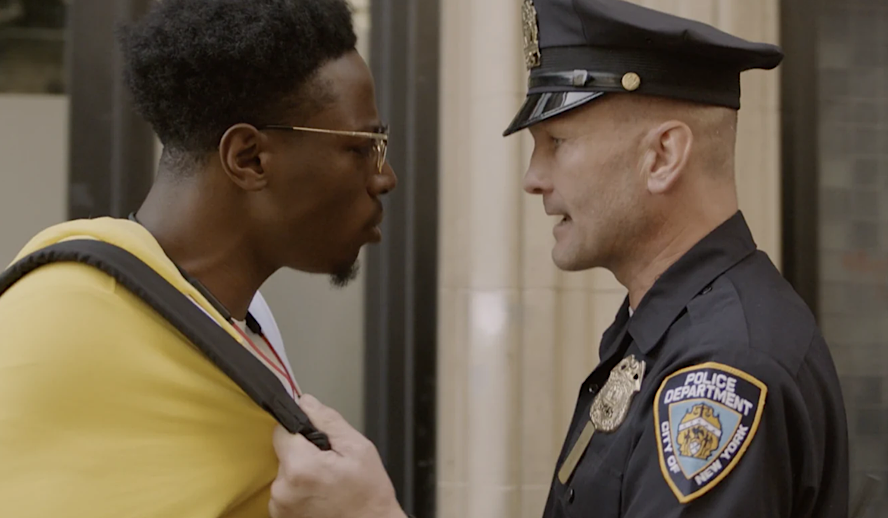 Four months after the year that brought so much pain for so many reasons ended, vaccines are being distributed at greater rates and the Biden administration holds a promise for a more equal America. Despite these sentiments of hope though, last year’s problems are still this year’s mess to clean up. With the exception of the pandemic, many problems from last year were deep-rooted centuries-long issues that were simply given the international stage due to immense tragedy, the greatest example of which was the Black Lives Matter movement. The deaths of George Floyd, Breonna Taylor, and Elijah McClain, and many many others before them who were murdered by the police were precursors to the movement last June.

Writer/Director Travon Free, previously a writer for The Daily Show and Full Frontal with Samantha Bee, did what many artists do during times of despair: take the pain and put it to good use. Co-directed by Martin Desmond Roe, their short ‘Two Distant Strangers’ tells the story of a young Black man, Cater, played by rapper Joey Bada$$ who is stuck on a time loop of being confronted and eventually killed by the same white cop, officer Merk, played by Andrew Howard. This happens every day following a morning after a first date as Carter is simply trying to get home to his dog. Now nominated for the Oscar for the best live-action short film category, the film feels fresh despite using a well-known trope, and accessible despite its tragic context.

The ‘Groundhog Day’ trope is having a moment. What are the odds that two films in recent memory, the original Hulu comedy ‘Palm Springs’ being the other one, use the living the same day on repeat trick famed by the 1993 classic? To be fair ‘Palm Springs’ was made before the pandemic hit, but a coincidence in a year that felt like the whole world was repeating the same day over and over again. In ‘Two Distant Strangers’, Free takes a centuries-long pain and successfully expresses completely in 30 minutes, a feat that could only be as effective as it is by using the domineering repetitive structure.

We see Carter get frustrated each time he wakes up, over one hundred times he informs Perri, the girl he was with the night before, played by Zaria Simone. Not only does Carter experience the obvious pain and fear that comes with being a Black person against the police, but his reactions also express the anxiety felt each time news of a new Black person shot by the police breaks: the helplessness and despair we all feel of how do we fix this never-ending cycle.

Rightfully so, the first time Carter is killed by Merk is a very clear interpretation of George Floyd’s murder. It would be wrong to start the film any other way than with those blood-curdling three words that became the voice of a movement, “I can’t breathe.” From there on out, an altercation arises every time Carter leaves the apartment always ending in his death. He goes on to try different methods of evading his fate, but none prevail. The filmmakers also pay homage to Breonna Taylor. When Carter tries to simply stay put with Perri to see what happens, the police storm the apartment in full swat gear, the “plotline” being that they got the wrong apartment. There is also a beautiful aerial shot of the cop car cruising down New York City affording us a look at a rooftop art display with the name of several victims of police brutality painted on top.

Unlike Dorothy in ‘The Wizard of Oz’, Carter simply cannot tap his heels together three times and go home, but the film is filled with the same spirit of character and the sentiments of safety that comes with being home. The film opens with the still life of his millennial chic apartment, complete with a renaissance portrait of him and his furry friend who is waiting around for him to come home. It’s a comfortable wonderful space, a place Carter is desperate to go back to. He finally tries talking to the cop, explaining that they are on a loop and Menk agrees to drive him home.

The drive home is where the film takes an unexpected route. Carter and the cop get to talking and more importantly, really communicating, taking the film into its miniature third act. The open ending is necessary for a film about an as of yet unsolved problem. Without spoiling much, the way that ending is reached, however, does not 100% work. This is probably due to the fact that Free and Roe completely throw out the laws of the world that they have created for the sake of fooling the audience. The only other major criticism is that Merk is played a bit too much like a caricature of a New York City cop, the tough guy accent and jargon are a bit excessive.

At any rate, the ending lands like a blow, as we hear the lyrics to Bruce Hornsby & The Range’s “The Way It Is” and traditional credits are replaced by the names of several victims of police brutality along with some of the most mundane things they were doing while they were killed. It’s a cathartic moment for a nation living in the echoes of last year, desperate for a way forward with Carter as the hero to lead us there.

It’s the little moments of humor throughout, such as a joke about Kevin Hart’s ‘Ride Along’ and the fun rom-com type chemistry Carter and Perri have, along with Carter’s attitude that fill ‘Two Distant Strangers’ with life and give the piece a tone of resilience. What’s more, we never lose sight of the damage that has been done, and the work yet to be done as we watch a young man with so much potential in life and love, fight simply to get home to his dog.

‘Two Distant Strangers’ got its Netflix release Friday, April 9 ahead of the Oscars ceremony on April 25. Watch it here.