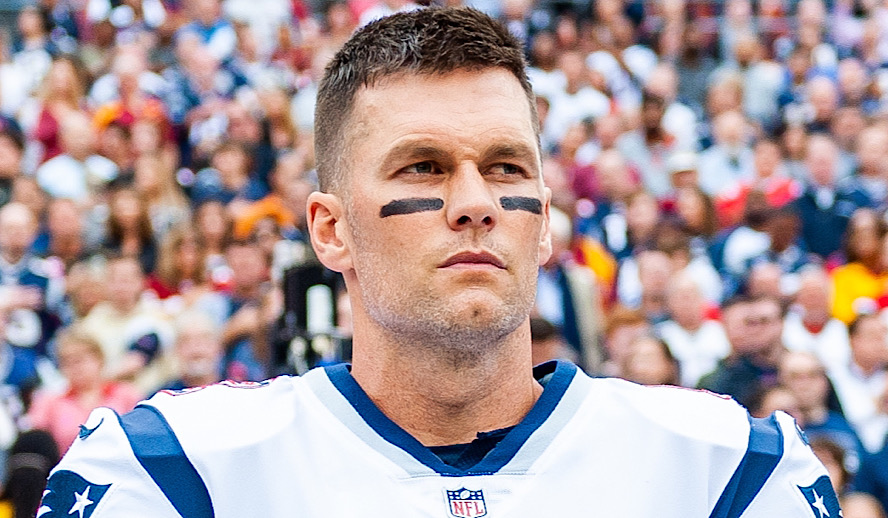 Tom Brady got his start as the 199th draft pick in the sixth round of the 2000 NFL draft. Now, at 43-years-old and with nine Super Bowls under his belt, he is gearing up to win what could be his seventh ring at Super Bowl LV, thanks to an impressive first season with the Tampa Bay Buccaneers.

After a 31-26 victory against the top-seeded Green Bay Packers on Sunday, Brady and the Bucs became the NFC Champions, marking both Brady’s 14th conference championship game, and his first with his new team, as well as the first time that Tampa Bay had even been in the playoffs in 13 years. The sheer fact that this is now the tenth time that Tom Brady will play in the Super Bowl almost makes getting there seem easy, even though it is anything but.

“It’s been an interesting life for me, you know?” Brady said to sportswriter Peter King. “I still get to do something I love to do and certainly don’t take anything for granted. Just grateful to everyone who supports me. And obviously my wife, my kids. Nobody can do anything in life without incredible support. Grateful to my parents, for being raised the right way. The commitment they showed. And my friends over the years. I think man, I’ve accomplished all of these things and I think for me the best part is sharing it with everybody else and just seeing videos of my kids jumping around and my friends jumping around. It makes it all so special for me and worth everything because I still get to live my dream. It’s an amazing feeling.”

The win was also significant in that it is the first time out of the 54-year history of the Super Bowl that a team will play at their home stadium, as the Buccaneers are set to take on the Kansas City Chiefs at Raymond James Stadium in Tampa on February 7.

Tom Brady – Career Beginnings to the Reign of the Patriots

Brady played football at the University of Michigan before he was drafted by the New England Patriots in 2000, and thanks to the late selection, is now considered the “biggest steal” in the history of the NFL draft. He became the Patriots’ starting quarterback during his second season and went on to play for 20, creating the NFL record for seasons as a quarterback for a single team. Throughout that time span, the Patriots won 17 AFC East titles and never had a losing season. Brady’s talent combined with the direction of Patriots head coach Bill Belichick led to them becoming the most successful out of any other coach-quarterback duo, setting NFL records left and right, and appearing in nine Super Bowls and winning six rings in the span of 17 years.

His first big victory took place the same year he took over as the starting quarterback in 2002, when he led the team to first place in the AFC East and then to Super Bowl XXXVI, shocking fans everywhere by winning against the heavily-favored St. Louis Rams. Brady then led them to back-to-back Super Bowl championships the following years in 2004-2005, winning them both. During the 2007 season, he set an NFL record with 50 touchdown passes and additionally led the team to the first perfect regular-season record since 1972, finishing 16-0, but lost to the Giants in 2008’s Super Bowl XLII. 2012 and 2015 saw the Patriots in the Super Bowl for the fifth and six times, and though they lost during the former, their win against the Seattle Seahawks in 2015 was one of their first big fourth-quarter comebacks that they would come to be known for.

Of course, it was the insanity of the Patriots’ 2017 win that is arguably the best comeback story in Super Bowl – and sports – history and was also what led Brady to his fourth MVP award. Super Bowl LII featured the Patriots overcoming a 28-3 deficit to beat the Atlanta Falcons 34-28 in overtime, winning 34-28 at the end of a shocking fourth-quarter that continues to be remembered for its absurdity. Brady’s most recent appearance in the Super Bowl was in 2019, the year after the Pats were beat out by the Philadelphia Eagles in 2018’s game, and with a score of 13-3 against the LA Rams was the lowest-scoring Super Bowl ever. Despite that, it made Brady the first player in history to win six Super Bowls, furthering his legendary status as one of football’s greats.

However, in a crushing blow to Patriots fans everywhere, Brady signed with the Tampa Bay Buccaneers in March 2020. As a die-hard fan myself, it was at first difficult to accept that the quarterback that I had watched play for New England my entire life was moving onto greener pastures (quite literally, as he left behind the typically snow-covered Massachusetts for Florida’s sunny and warm weather) but the disappointment that I along with most fans faced quickly faded into respect, as we watched him continue to beat his own legacy and walk into yet another Super Bowl, even if it wasn’t on his home team. With 40 touchdown passes – his highest since 2007 – and 4,633 yards this season, it is easy to acknowledge his unwavering and age-defying performance despite the team swap. Andy Reid, the Chiefs’ head coach, acknowledged this in his press conference on Monday. “He’s playing at an extremely high level,” he said. “And for somebody his age, it’s unbelievable. I mean, it’s unbelievable for a 25-year-old to be doing what he’s doing, let alone a 43 year old.”

Brady is of course best known for helming the New England Patriots for 20 seasons, and within that time frame came endless record-setting in terms of Super Bowl titles, MVP awards, passing yards, and touchdowns. He has won more playoff games than any other quarterback and has thrown for more passing yards and touchdowns than any other quarterback in NFL postseason history, and out of a whopping nine Super Bowls, he won six of them (XXXVI, XXXVIII, XXXIX, XLIX, LI, and LIII), which remains the most out of any player in the history of the NFL. It was undoubtedly impressive when he initially surpassed the four rings of his childhood idol, Joe Montana, and Terry Bradshaw, and even more stunning when he reached his sixth, so it goes unsaid that a seventh ring would be unbelievable. Brady has also earned himself three NFL MVP awards and a record four Super Bowl MVP awards thanks to his performances in the big game, most recently for 2017’s comeback game against the Falcons.

Due to the numerous accolades that he has racked up over the course of his career, especially as many of them came at an age that most football players retire before (he was previously the oldest quarterback to start and win a Super Bowl at age 41, and may now potentially break both of those records), Brady is considered the greatest quarterback of all time, and one of the greatest players in NFL history. It is a well-deserved title from a man who has worked incredibly hard since the start of his football career and has continued to surprise even his biggest fans by surpassing all expectations of his retirement, and through his continued stellar performances.

You don’t need to be a Brady fan or a Patriots fan to be able to recognize that he has had a ridiculously successful career. But from the looks of it, he is only set to keep propelling it forward, if the tenth-time clench of a Super Bowl spot is anything to go by.