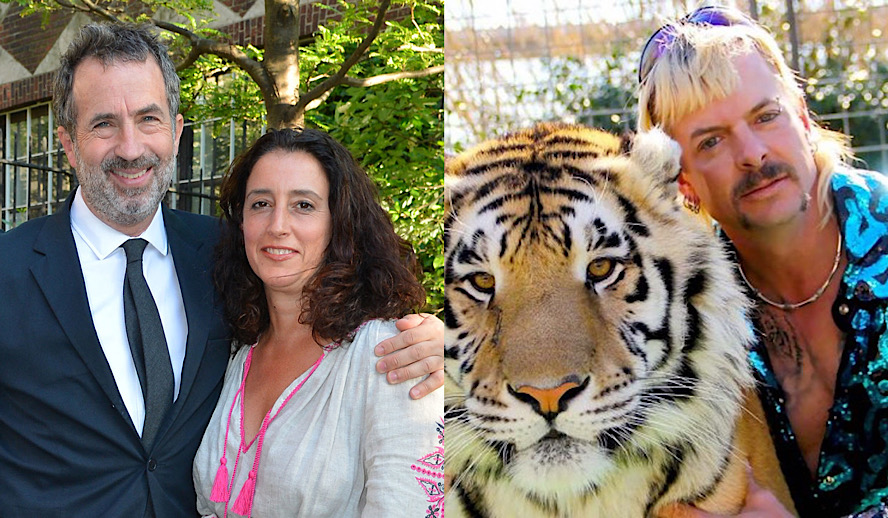 In the midst of this pandemic, Netflix’s Tiger King by Eric Goode & Rebecca Chaiklin has dropped the next biggest docuseries, in the vein of Fyre or How To Make a Murderer.

However, in the case of Tiger King, the series feels unfocused and unintentionally humorous that this was meant as a mockumentary rather than a real-life documentary.  Directors Eric Goode and Rebecca Chailkilin bring to the forefront a man who is a stranger-than-fiction character, Joe Exotic.  With his bleach blonde mullet and colorful animal print clothes as he holds lions and tigers, you are immediately intrigued by this character.  Just in the trailer alone, Joe Exotic mentions murder for hire plot, then cuts to him owning all of these various exotic animals throughout Oklahoma, and even goes into his polygamous marriages.

Even when I watched this trailer with my friend, we simultaneously turned to one another and said, “What is this about?” And that is the key to Tiger King’s appeal.  Goode and Chaiklin, rather than focusing on one plot, focused on many insane plots, stuffing the show with as many wacky, stranger-than-fiction characters as humanly possible to keep the viewers entertained.

The Duo Directors Eric Goode & Rebecca Chaiklin Use The Ensemble of Weird Characters for Humor, rather than being Objective in their Story

The crux of the issue with Tiger King is the duo directors Goode and Chaiklin have seemingly zero empathy for any of their subjects, instead using them for comedic value.  It is clear throughout the series that no one here is a good person, but instead of being objective about the story at hand, it seems they use these strange people so that we can giggle and laugh at them. There are many instances of this: The scene where a sheriff describes “meth mouth” and immediately after we get an immediate cut to Joe Exotic’s husband’s teeth.  This is done on purpose for a shocking reaction.

For example, Doc Antle is introduced around the fourth episode, halfway through the series.  He seems to be a quirky cultist that grooms teenagers using his exotic animals, only to euthanize them later when they are too old to make him a profit.  This is only mentioned in passing, for one episode, and is never investigated to the extent that Joe Exotic is.  The only reason it seems that they bring him into this story is so we have another strange circus act to gawk at.

And Joe Exotic’s inability to have people in his life that he doesn’t simply use is a gag and only a gag.  This is another example.  If you want the audience to feel sympathy for the men who were abused throughout Joe’s marriages, you should develop and explore those relationships.  Which they do not.  Rather, they at first paint all the relationships as consensual and a couple of episodes later pile on information that was not developed or known.

It feels sloppy, rushed, and that they did not actually care for the victims.  Instead, it feels like Goode and Chaiklin threw in the sudden information of abuse/suicide, which the family had stated they were actively against, for shock value.  Not only that, but it feels comedic, not tragic, that the very next episode after losing Travis, Joe has a new husband.

You could argue that there are so many stories, plots, and material to cover here.  Yes, all the different little stories here could probably warrant their own miniseries or short film.  But don’t bite off more than you can chew.  The directors could have focused on simply just the tension between Joe and Carole, and how this escalated over time.  Many people took interest in the conspiracy of Carole Baskin possibly murdering her husband, run with that.  Or, rather since it seems parties on both sides were abusing animals, maybe just focus on animal abuse?

By doing that, you possibly could have kept the show grounded and avoided much of the absurdity of the more outlandish characters.  Point being, this is a show with too many ideas and too many stories that it is trying to tell at once.  If anyone would have put a spotlight or focus on any one story or person, while also grounding this in reality, it would have made it a much better watch.

Related review: ‘Tiger King’: Murder, Mayhem, and Madness – The Tales and Trials of Joe Exotic, Big Cats, Did Carole Baskin Do It?

To each their own. I don’t fault anyone for having a great time with this, there’s no arguing that it is a great example of stranger-than-fiction material, but I walked away from Tiger King with more questions than answers about many of the stories they were trying to tell.