A Review: Questlove’s ‘Summer of Soul (…Or When The Revolution Could Not Be Televised)’ 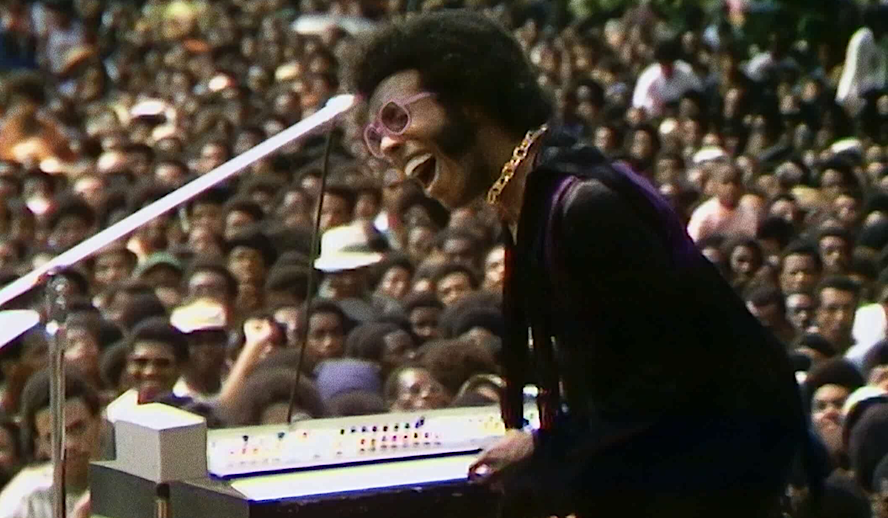 Photo: ‘Summer of Soul (…Or When The Revolution Could Not Be Televised)’/

The first moments of Questlove’s new documentary on the forgotten Harlem Cultural Festival of 1969 open with rough footage of clapboard in front of the first interview subject, a festival attendee. The working title on the clapboard is ‘Black Woodstock Doc.’ Even though it may have been a working title, it’s indicative of the reality that so many people of color, and those trying to promote diverse stories often find themselves needing to compare things to their white equivalent to get people’s attention. This is a running thread throughout ‘Summer of Soul (…Or When The Revolution Could Not Be Televised.)’ Even the repaired (and brilliant) title reflects that this as significant as it was, most people didn’t know about the festival until now.

The Harlem Cultural Festival happened in the summer of 1969 during six consecutive weekends. About 40,000 people attended each day, and 300,000 people attended in total, taking place in Mt. Morris Park. It was organized by singer and host Tony Lawrence, who served as the producer and director. The festival was free of charge and among the incredible artists to take the stage were Stevie Wonder, BB King, Nina Simone, the Chambers Brothers, Sly and the Family Stone, David Ruffin, and The 5th Dimension.

Producer Hal Tulchinfilmed the entire concert, where it sat in storage for years until Questlove’s film. The film is a joyous and informative celebration of a pivotal time in Black America’s cultural and civil history, and the faces bursting with pride clear on the faces of the audience members and on attendees and performers years later proves that although forgotten, the festival was a success.

‘Summer of Soul’ – Forgotten by Most, Unforgettable for Some

From the moment that Lawrence introduces the first act, none other than Stevie Wonder, the music never stops, intercutting with interviews and information about the era and the acts; that is, until the last five minutes where we see the barren aftermath of the park and the rolls of film sitting idly, as if the festival never happened. It seems like a pretty straightforward method: the best way to retell something that has been forgotten by the masses is to talk to people who were there.

But something about ‘Summer of Soul’ feels different and fresh, maybe it’s the way the interviews with ordinary people who were attendees are intermingled with some of the artists, maybe it’s because they all had the same feeling no matter who they were, that of good memories and unification through music. Take for instance the man who explained that he and his friends were ‘suit and tie’ guys favoring traditional type Black bands, but after seeing Sly that day everything changed. Another attendee explained how it was the ultimate Black picnic, with people bringing and some selling home cooking. Flashes of old men dancing are intercut with kids on their parent’s shoulders, establishing effortlessly this warm barbeque setting.

Mavis Staples of The Staple Singers describes what she considers one of the greatest moments of her career, unexpectedly starting up a Martin Luther King Jr. dedicated “My Precious Lord” for Mahalia Jackson, who she considered her idol. Then we see the moment, and the urgency and passion in young Staples’ face and voice is undeniably powerful. Two members of The 5th Dimension, Billy Davis Jr. and Marilyn McCoo watch their performance and their nostalgia is poignant and moving.

It’s heightened by the fact that in 1969, they had felt that the Black community overlooked them and dismissed them as too white-sounding, which is why performing in Harlem was so important to them. The reaction from the crowd reverberates the sense of belonging they were seeking. These personal memories feel so large due to the context of the era and all the baggage that comes with it.

History and Culture Through Music

The film restates several times that 1969 was a pivotal moment in time for Harlem. The assassination of Dr. King had been just a year before the festival, and “Black” was just starting to be embraced as a term of strength. The film does an excellent job of capturing the culture and conflict of the era in Black America through the lens of this music festival. The mix of musical acts in and of itself is a testament to this; the diversity of the different types of sounds of the community were all present including gospel, Motown, jazz, and those of the Latino peoples of East Harlem.

The rich cultural scene of the neighborhood is shown through photos of clubs, theatres, restaurants. Due to the variety in the types of costumes and clothes worn by the attendees and performers, there’s a sidebar about African fashions adopted at the time, as well as how the afro was becoming a symbol of embracing Black hair.

One attendee who was in college during the festival describes Harlem in those days as safe, a place where she was happy and made her lifelong friends. This is countered by a news segment highlighting the hardships of the area. These different perspectives are important, and the film continues to highlight where Harlem was in relation to the historical and sociological circumstances of the time. For example, the moon landing happened during the festival, but many festival attendees still maintained the festival was more important and thought the Apollo Mission was a waste of money that could have gone to the fight against poverty, a perspective that is not often talked about.

The Black Panthers were there providing security when the NYPD refused.  A female attendee recalls being empowered by seeing Cynthia Robinson, the female trumpeter in Sly and the Family Stone, perform on stage. To top it all off, the incomparable Nina Simone gets her moment in the end where she maintains that to be “Young Gifted and Black” is the greatest combination anyone can wish for. That anthem of pride is what helped young journalist Charlayne Hunter-Gault maintain her strength when she was being harassed at her newly integrated university.

As Simone states, you can’t be an artist and not reflect the times. At such a delicate time, ‘Summer of Soul’ displays the artists and those that they affected were all part of the same art. That art was and still is used in equal parts to make noise, create joy, relieve stress, express anger, and celebrate. ‘Summer of Soul (…Or When The Revolution Could Not Be Televised)’ is available to stream on Hulu.