‘RRR’: A Powerful, Bonkers, and Thoroughly Executed Story that Transcends Established Genres | One of the Best Films of 2022 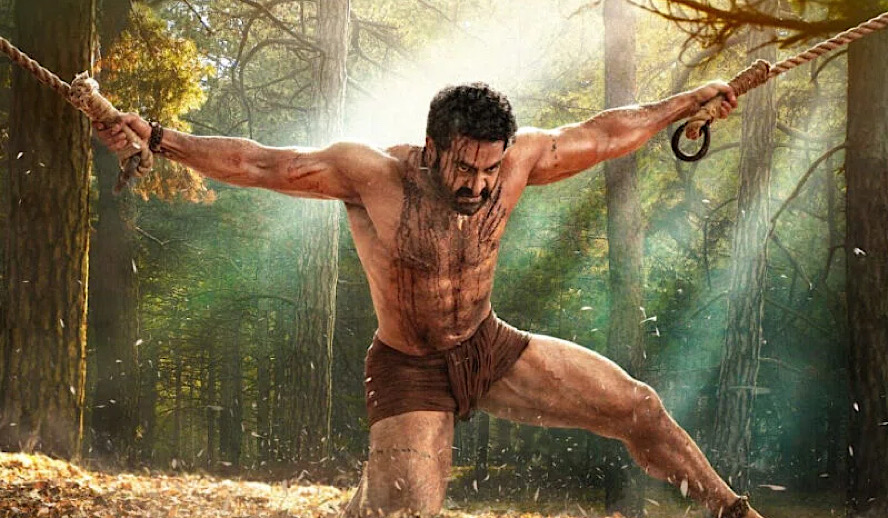 Normally, when a movie or show fluctuates in tone and pulls elements from many different genres, it often turns out very convoluted not knowing what type of story it wants to be.  This is definitely the case with many blockbusters.  Most try to include tropes and tools from a handful of different genres which isn’t necessarily a bad thing, however nine times out of ten they end up falling flat causing the narrative to be very dull.  This is the polar opposite of S.S Rajamouli’s ‘Rise Roar Revolt’, otherwise known as ‘RRR’.

The primarily Telugu-spoken film follows a fictional story between two real-life characters who try to fight back against the brutally real British colonization of India in the 1920s.  The first of the movie’s two protagonists is Bheem, a warrior sent to rescue a girl kidnapped from his village by British troops who is played by N.T. Rama Rao Jr.  The other main protagonist is Raju, an officer in the British Army who is tasked with stopping Bheem and is played by Ram Charan.  The film also stars Alia Bhatt, Ray Stevenson, Olivia Morris, and Alison Doody.  This harrowing story is a tale of friendship, liberation struggles, crazy action sequences, and stimulating musical pieces.

Despite the story being fictional, the two revolutionaries that the film follows actually existed and the backdrop of British colonization of India obviously took place.  The film has its lighthearted moments which will be touched on later in this review, however, it does not shy away one bit from showcasing the brutality that the various people and tribes of India endured during British colonial rule.  Whether in the clash sequences between British police and protestors, the prison and torture scenes, or when seeing a girl be kidnapped from her village to be a servant in the governor’s mansion, the film does a superb job of conveying the trauma that victims of oppression and imperialism feel.

The viewer is also able to feel the conflict of Raju’s character as an Indian man in the British colonial army.  Eventually, the film shows us why this character partakes in the suppression of his fellow countrymen, how he found himself in this position, and what has led him here.  He finds himself making many decisions that really violate his sense of identity and own well-being.  The various characters in the British governance of India such as Ray Stevenson, Alison Doody, and Edward Sonnenblick all do an effective job in portraying the attitudes that the colonizer has against the colonized.

The film goes all out in its wild, wacky, and wonderfully over-the-top style of entertainment.  Beginning with the many action sequences, the film utilizes slow-motion as much as it pleases.  This can very easily become obnoxious and annoying to the viewer.  However, the film seems to almost be aware of this fact and finds a way to somehow embrace the over-the-top nature of repeated slow-motion shots, which miraculously stick the landing.  The unapologetic use of slow-motion multiple times throughout every action sequence greatly enhances their entertainment and overwhelms the viewer with excitement.  The use of slow-motion especially enhances the entertainment of these scenes during absolutely bonkers moments such as when a character jumps out of a truck carrying two torches with a hoard of tigers, leopards, bears, and wolves at his side.  Another one of these moments is when a character swings a motorcycle around his head to fend off approaching enemies.  The use of slow-motion is not only acceptable, but welcome with open arms.

Another wonderfully wacky aspect of this film is the exuberant musical pieces throughout.  Some are exciting and moving songs that play while the action on screen is taking place.  Others are actual musical sequences that feature the characters singing and dancing.  This is absolutely not an exaggeration, but the song ‘Naacho Naacho’ will be one the viewer will listen to on repeat for days after seeing this movie.  The music, composed by M.M. Keeravani with lyrical contributions in Hindi as well as Telugu from Riya Mukherjee, Sirivennela Seetharama Sastry, Chandrabose, and Varun Grover along with vocals provided mainly by Kaala Bhairava and Rahul Sipligunj, make for some of most powerful musical moments seen in any film in years.  While there are many light-hearted moments filled with music, there are also a handful of scenes where music is used to evoke a more serious emotional effect in an effort to show the many sides of oppression at the hands of a powerful empire like England.

‘RRR’ is not only a great blockbuster and a fantastic spectacle film, it is also an exceptionally well written story.  S.S Rajamouli and Vijayendra Prasad’s script takes the time to introduce characters that are not only original but also have reasonable motivations for the audience to buy into.  It is impossible to count the number of times, especially in blockbusters, where characters did not have a believable or unique drive in taking the actions that they do.  This is especially engaging to watch during scenes of conflict when certain characters both have empathizable motivations for what they are doing, yet that is what brings them into an inevitable impasse with each other.

The story also features many twists and turns, none of which are unoriginal.  They feel earned, realistic, yet unpredictable at the same time, a very difficult point to find in any type of story.  The dialogue is also witty when it is able to be, empowering when it has earned itself to be, and sensitive when it has to be.  There are a few lines that did feel as if they were there simply because they had to be, but they are very few and far between so this is the most minor of nitpicks.  ‘Rise, Roar, Revolt’ or ‘RRR’ is one of the best films of the year and deserves the ever-growing word of mouth it is getting.