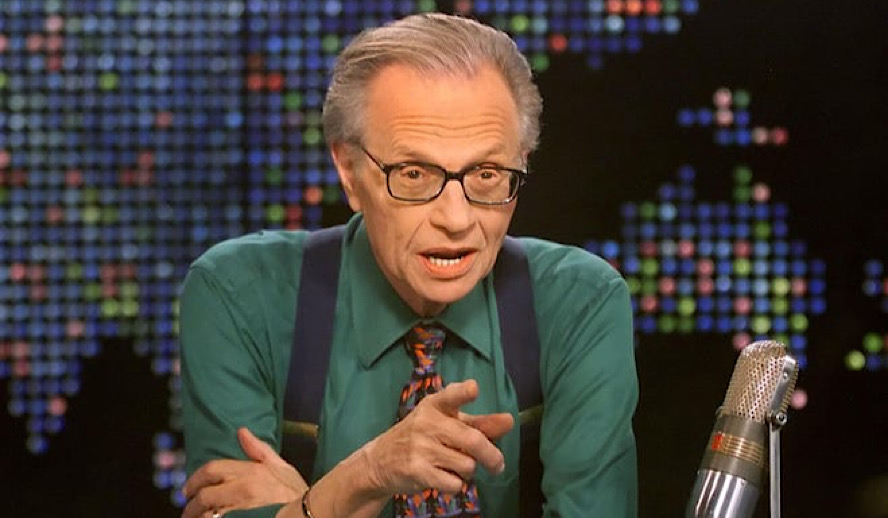 Larry King, famous for his suspenders, affable interview style, and being the face of CNN’s broadcast for 25 years, passed away on January 23 at age 87.

“With profound sadness, Ora Media announces the death of our co-founder, host, and friend Larry King, who passed away this morning at age 87 at Cedars-Sinai Medical Center in Los Angeles,” the statement read. “For 63 years and across the platforms of radio, television and digital media, Larry’s many thousands of interviews, awards, and global acclaim stand as a testament to his unique and lasting talent as a broadcaster.”

No cause of death was stated, but King had been hospitalized for COVID-19 in late December. His three sons, Larry, Jr., Chance, and Cannon, released a statement regarding their father’s death. “The world knew Larry King as a great broadcaster and interviewer, but to us, he was ‘Dad.’ He was the man who lovingly obsessed over our daily schedules and our well-being, and who took such immense pride in our accomplishments — large, small, or imagined,” their statement said.

“Through it all, we knew without a doubt in the world that he loved us more than life itself. He was an amazing father, and he was fiercely loyal to those lucky enough to call him a friend. We will miss him every single day of our lives.”

Ted Turner, the founder of CNN, commented on King’s death. “Larry was one of my closest and dearest friends and, in my opinion, the world’s greatest broadcast journalist of all time,” he said. “If anyone asked me what are my greatest career achievements in life, one is the creation of CNN, and the other is hiring Larry King. Like so many who worked with and knew Larry, he was a consummate professional, an amazing mentor to many, and a good friend to all. The world has lost a true legend.”

Jeff Zucker, the President of CNN, remembered the lasting impact King made on CNN and in television. “We mourn the passing of our colleague Larry King,” he said in a statement of his own.

“The scrappy young man from Brooklyn had a history-making career spanning radio and television. His curiosity about the world propelled his award-winning career in broadcasting, but it was his generosity of spirit that drew the world to him. We are so proud of the 25 years he spent with CNN, where his newsmaker interviews truly put the network on the international stage. From our CNN family to Larry’s, we send our thoughts and prayers, and a promise to carry on his curiosity for the world in our work.”

Born Lawrence Zeiger, King had his sights set on a broadcast career from a relatively young age and had set out for Miami in 1957 in hopes of breaking into the industry. His first job came in the form of performing menial tasks at an AM radio station, but he wound up landing a spot on-air as a DJ after one abruptly quit the position. His well-known surname originated from this station, as the manager had thought Zeiger was “too Jewish” and difficult to remember, and he legally changed his name to Larry King two years later.

After that small success, he moved on to host a daily interview show on WIOD that aired from a restaurant in Miami Beach. He would interview waiters and celebrities who entered the restaurant and gained himself local attention that further propelled his exposure, as he moved on to host “Sports-a-la-King,” a sports talk-show featuring guests and callers, before his big break in 1978.

That year, “The Larry King Show” launched as the first nationwide radio call-in show. The syndicated show initially aired in 28 cities before spreading to a total of 300, winning a Peabody Award in 1982 and serving as his ultimate stepping stone to fame. Airing on the Mutual Broadcasting System out of Washington, “The Larry King Show” became a national phenomenon, airing for 16 years and ultimately leading him to his slot on CNN. In 1985, Ted Turner offered King a position on his newly-created network, and “Larry King Live” debuted on June 1st, quickly becoming CNN’s most-watched and highest-rated program.

“Larry King Live” aired on CNN for over 25 years, and King became famous for his easy-going and casual yet insightful demeanor. He hosted a vast range of guests, interviewing everyone from presidential candidates, celebrities and athletes, to conspiracy theorists and psychics or even just everyday people. King notably interviewed every sitting president from Gerald Ford to Barack Obama, and many prominent figures would seek out his show for their first or only interviews, often breaking news on his show as he became known for his non-confrontational questions and intent listening.

Wendy Walker, the executive producer of the show, commented on him and his interview style. “The one thing he loved was being in front of that camera,” she said. “He was a very interesting man but that one hour a day, when those lights came on, he was just perfect. He treated every guest the same. It didn’t matter if it was a president or somebody just off the street.”

Interestingly, King would typically not prepare for his interviews and would leave the conversation up to the guest and his resulting curiosity. “Probably that was the hardest part of our job — trying to prepare him because he never wanted to be prepared,” Walker said. “He read all day long and watched news, so he was really informed but he really just wanted to hear his guests talk and then come up with his questions.”

“I’ve never learned anything while I was talking,” King said in the past, and this was one of the many things that set him apart from several other broadcast personalities.

After over 6,000 episodes and 60,000 interviews on “Larry King Live,” King retired in 2010, over two decades after the show’s premiere, but would go on to work until his death, hosting “Larry King Now,” that streamed on Ora TV and Hulu. “Larry King Live” went on to become recognized as “the longest-running television show hosted by the same person, on the same network and in the same time slot” by the Guinness Book of World Records, and led to King winning the 1992 Peabody Award for excellence in broadcasting, which he had also won for his radio show in 1982.

Both the National Radio Hall of Fame and the Broadcasters’ Hall of Fame inducted him in 1989 and in 1996 respectively, and in 2002, Talkers Magazine named King both the fourth-greatest radio talk show host of all time and the top television talk show host of all time. It was certainly thanks to his long-lasting career with CNN combined with his suspender-clad outfits and amiable personality that Larry King will forever be known as a prominent figure in the broadcasting industry and one of the most famous television personalities to date.