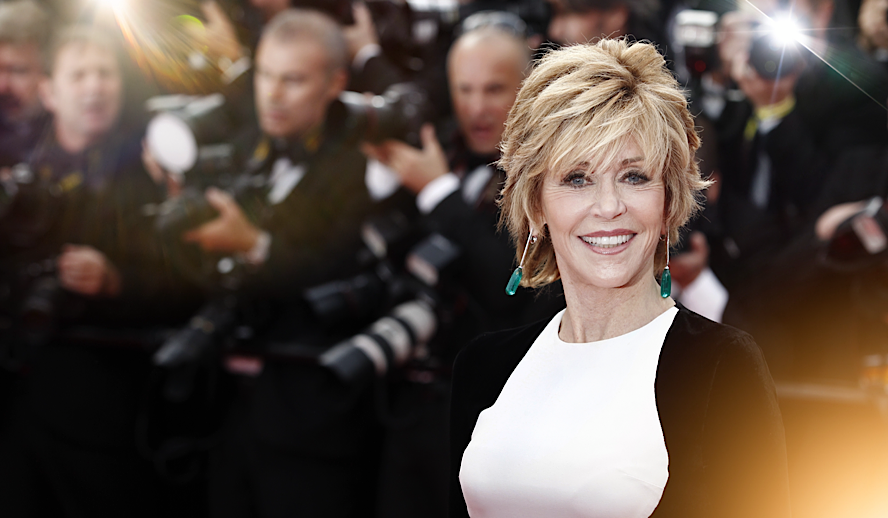 Photo: Jane Fonda at the premiere of ‘Rust and Bone’ during the 65th Cannes Film Festival in France/Andrea Raffin/Hollywood Insider YouTube Channel

Having a successful career in Hollywood is a rare occurrence. Having a successful career in Hollywood for six decades is even more rare, so on Sunday at the 78th Golden Globes the Hollywood Foreign Press Association decided to honor such a career by giving the Cecil B. DeMille Award to none other than Jane Fonda. Between her roles in film and television and her activism, Fonda has shown us what it really means to be a role model and given us the example as to how we should lead our lives.

Jane Fonda has had a wide array of roles over her six decades in film and television. Her first role was in 1960 in the romantic comedy ‘Tall Story’ as a woman attending college to find a husband. She got her first Oscar nomination for her role as Gloria Beatty, a woman competing in a dance marathon, in ‘They Shoot Horses, Don’t They’ which finally gave her the push to select roles that weren’t necessarily about getting an audience to love her.

She won her first Oscar for her role in 1971 for her turn in ‘Klute’ as Bree Daniels, a call girl assisting in solving a murder case, a role which Fonda credits as helping her find her feminist awakening saying the role taught her “If you can go deep into any human being, that is feminism.” Her second Oscar came from her role as a wife to a Marine officer who is off fighting in Vietnam in ‘Coming Home’ in 1978, a role which made her an advocate for the handicapped, saying in her acceptance speech “I’m signing part of what I’m saying tonight because while we were making the movie we all became more aware of the problems of the handicapped.”

One of her most iconic roles was in 1980 when she played Judy Bernly in ‘9 to 5’, a film about sexism in the workplace, alongside Lily Tomlin and Dolly Parton. Her own production company produced the film based on an idea she got from a friend who had organized a group of secretaries and the horror stories of harassment these women had faced. Lily Tomlin had recommended the director and then the three women had him consult with a group of secretaries so he could best portray their workplace struggles on screen despite being a man, with Fonda saying “When we came to do the film, we said to Colin [Higgins], OK, what you have to do is write a screenplay which shows you can run an office without a boss, but you can’t run an office without the secretaries!”

In more recent years she’s been in more romantic comedies, family dramedies, and smaller dramas when it comes to film. Her biggest recent role has been reuniting on television with her ‘9 to 5’ co-star Lily Tomlin on the show ‘Grace and Frankie’ about two recently-divorced women who wind up roommates in a beach house together. The show tackles topics such as ageism and sexuality which Fonda says has given her a new look at her view of her age: “When I was in my 40s, I said before I die I want to be part of giving a cultural face to older women, and I can’t tell you how much feedback Lily [Tomlin] and I get from older women who say it’s given them hope—and not-so-old women who say, “I now see another way forward.”`

Aside from acting, Jane Fonda is best known for being an activist for many different causes. During the Vietnam War she was an outspoken critic of American war efforts over in Vietnam, going so far as to go over there and see what was happening, a move which drew her much criticism and ire then and still does today despite her having apologized and shared her regret for doing so. In a statement before an appearance in 2015, she again expressed her regret for her actions then and how she’s made sure to listen and be an advocate for our troops since then, saying “Whenever possible I try to sit down with vets and talk with them because I understand and it makes me sad. It hurts me and it will to my grave that I made a huge, huge mistake that made a lot of people think I was against the soldiers.”

Fonda has also been ahead of the culture when it comes to mass advocating and acceptance. She has been advocating for LGBTQ+ rights since the 1970’s, speaking about how they deserve equal rights before it became the popular thing to do. She also has been a staunch advocate of civil rights and improving life for BIPOC, having protested with and supported the Black Panther Party, protested with Native Americans when their land was being threatened, and doing what she can to make people understand the root of racism and our history in the United States, saying to Don Lemon in June 2020, “We have to understand what it is that keeps racism in place—the policies, redlining, banking policies, mortgage policies—all of the things that are making it really, really difficult for Black people to lift themselves up. White people have to understand the history that has led to this, and we have to try to make changes in ourselves, and we have to get to know Black people and they have to become our friends, and we have to understand the reality that they live in and we have to do it now.”

Her biggest activism effort in recent years has been her Fire Drill Friday protests, where she would gather each Friday outside of the U.S. Capitol building with climate change activists to use civil disobedience as a means of showing Congressional leadership how important climate change is to the future of our world and the damage it’s currently doing. Having partnered with Greenpeace USA, these protests have now spread across the US and held virtual events throughout the pandemic (since climate change isn’t going anywhere just because people are stuck inside). Even if it meant she got arrested, which happened five times, she used her voice to make people aware of the problems climate change is causing our earth.

There are so many things we can learn from Jane Fonda. From her acting career she has used her roles as a way to show different walks of life and share experiences many may not have known about otherwise. She has shown us that every role and even the smallest things serve a purpose.

Through her activism she has shown us that everyone can have a voice; everyone should be heard. She has made a point of fighting against injustice even if it doesn’t impact her directly because we are one people and injustice for one of us is injustice for all of us. She has shown people how to stand up for what they believe in even if there are consequences.

In her acceptance speech for the Cecil B. DeMille award at the Golden Globes Sunday she said “You see, stories have a way to, they can change our hearts and our minds. They can help us see each other in a new light, to have empathy, to recognize that for all our diversity, we are humans first, right? You know, I’ve seen a lot of diversity in my long life. And at times, I’ve been challenged to understand some of the people I’ve met, but inevitably, if my heart is open and I look beneath the surface, I feel kinship… let’s all of us make an effort to expand that tent, so that everyone rises and everyone’s story has a chance to be seen and heard.”

Fonda reminds us how we need to be empathetic towards our fellow humans and prop up those who tend to get muted. If we learn anything from Jane Fonda’s example, it’s how to help other people become the example they have looked towards her for.