Must Watch – A24 & Rose Glass’s ‘Saint Maud’: A Terrifying Glimpse Into the Descent to Madness | BAFTA Nominee 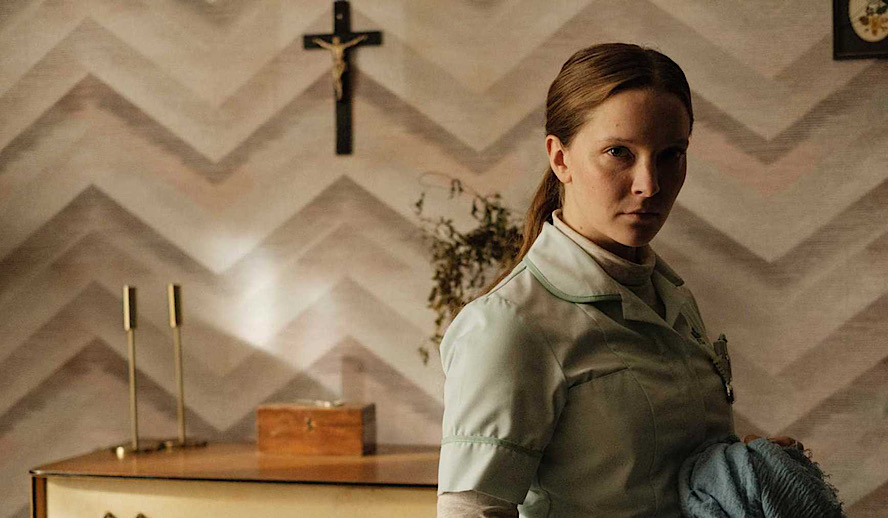 ‘Saint Maud’ was deservedly nominated for two BAFTA Awards in 2021 – Outstanding British Film and Outstanding Debut By A British Writer, Director or Producer.

‘Saint Maud’ is not a horror of the jumpscare and loud noise variety, rather, a thoughtful and enigmatic look into real-world issues and demons. Glass wisely decides to focus on the inner workings of the troubled mind, finding a home in the nuance and despair that comes with it. Powerful performances from the cast as a whole turn an interesting concept into a nearly perfectly executed stage play of modern scares, bolstered by incredible work from the surrounding production team. ‘Saint Maud’ is well-deserving of the critical success it has garnered and, honestly, deserves more recognition than its receiving.

The film centers around Maud, portrayed by Morfydd Clark, a nurse in Northern Ireland, who signs on to care for the former dancer and terminally ill, Amanda Kohl (portrayed by Jennifer Ehle). Maud, a newly converted Christian, tries to impose her beliefs on Kohl which leads to their untimely falling out and the acceleration of Maud’s delusions.

Clark And Glass Hit the Nail on the Head

Glass, who wrote and directed ‘Saint Maud’, put together one of the most bone-chilling scripts produced in recent memory. The script focuses largely on the idea of religion and the pervasive effects it can have on the vulnerable mind. Maud deals with oppressive grief stemming from the accidental killing of a patient while attempting to resuscitate them and the burden of losing her own child. Glass shows her clear understanding of the psychology of the troubled mind by weaving these tragedies into a backstory making Maud identifiable and sympathetic while maintaining an air of tension throughout, culminating in one of the most powerful performances of 2019.

Glass put together the overall concept, but a concept is only as good as its portrayal, and boy, did Clark rise to the occasion. Clark, who commented on her own struggles with loneliness, elevates the design to a truly powerful glimpse into the darkness of a depraved but well-intentioned woman. Clark’s ability to channel her own personal struggle into the role shines through convincingly, as she captures the essence of a lonely woman who falls to the clutches of a zealous religious belief that drives her down a path of obsession. Bearing all, Clark shows extreme vulnerability throughout, allowing for a truly intimate glimpse into not only Maud’s soul, but her own.

From dealing with traumatic grief to using sex as an outlet for internalized pain, ‘Saint Maud’ is a film that almost anyone can relate to in some abstract way. The fact that Maud is so nondescript and enigmatic allows for almost anyone to identify with her and her struggle. Namely, a struggle that ensues after great trauma which forces a person to transform themselves, recreating their image in the reflection of what they wish to be. This is true for Maud who unsuccessfully attempts to paint herself in the likeness of God, failing to realize she is slowly transforming into the Devil.

Isolation plays a major role in the film, further pushing Maud towards insanity and delusions as she is left to ruminate with her thoughts and desires alone, using only her subconscious mind as guidance. That guidance ultimately steers maud to zealousness, masochism, and obsession. Now, obviously, the everyday person does not deal with these issues to the extent that is portrayed in the film, but these are not all that uncommon in the hearts and minds of people around the globe today. What is truly horrifying about ‘Saint Maud’ is that the problems afflicting sweet Maud are so relatable. Countless people today struggle with mental health and find themselves dealing with isolation, sexual confusion, inferiority complexes, and a struggle to formulate meaningful relationships, not unlike Maud.

Ben Fordesman is another relatively new name to watch out for moving forward. With ‘Saint Maud’ being his first feature film and having only two other Narrative credits for Director of Photography (‘End of the F*cking World’, ‘Work’) Fordesman shows he is deserving of a spot amongst the Hollywood elite.

The film is set in a dreary but posh little beach town that becomes the Devil’s Playground, accentuated by creepy mountains and drab weather. Fordesman creates some of the most haunting visuals I have seen in recent years, showing off a wide range of visual capabilities. He excels when capturing stunning landscapes, evocative close-ups, and soul-stirring usage of color. This is definitely a name to keep on your radar.

Subtle, minimalistic, creepy. Adam Janota Bzowski creates some of the most abrasive yet tasteful sounds in film. Drawing inspiration from Jonny Greenwood’s You Were Never Really Here, Bzowski describes collaborating with Glass to create a minimal but effective score to compliment the atmospheric photography from Fordesman.

Flutes, percussion, and strings were the most used assets throughout the score of ‘Saint Maud’ which were manipulated and pitched down to create a heavier feeling. “I just knew there needed to be a density, a very thick weight that filled the screen, because in that moment, there’s no dialogue. And I felt like this film, although it features a Judeo-Christian aspect to it, it’s not really about God. The God aspect can’t sound too traditionally ecclesiastic.” describes Bzowski in an interview with Zach Schonfeld on SPIN.

If you are a Fan of Psychological Horror, See this Movie

‘Saint Maud’ is truly one of the most powerful entries into the horror genre in recent years, opting for a deeper, more sympathetic view of the depraved than we are used to seeing. Distributed by A24, the company continues to put forth exceptional titles, backing young and unproven directors and finding success in a number of different genres. ‘Saint Maud’ lives up to all the hype surrounding its own title and the A24 banner, alike. I will most certainly be on the lookout for work from Rose Glass and Morfrydd Clark moving forward, and I definitely recommend you do too.