The Fellini Masterpiece – ‘Nights of Cabiria’: A Woman and Her House 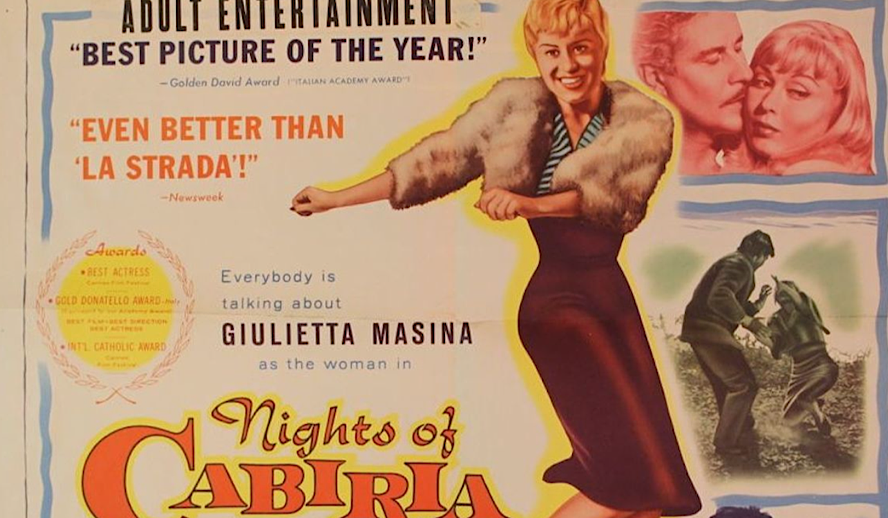 While browsing the dreaded email from Criterion Channel about what’s leaving the platform in August I was surprised to see Federico Fellini’s masterpiece ‘Nights of Cabiria’ as one of the ill-fated titles losing their spot on the streamer. Although these monthly emails are never a welcome sight, The Criterion Channel’s monthly programming is as good as it gets. I understand what it takes to curate a channel with such high standards and dedication to Cinema, however, I truly believe a film like ‘Nights of Cabiria’ deserves a place in the never-changing “all-time favorites” section. The film stands as an important part of Fellini’s career, the bookend to his part in the neorealist movement, using the last five minutes to openly bid farewell to it in a move of genius. It’s his fifth and singularly most important collaboration with Giulietta Masina, the couple were married from 1943 until his death.

The 1957 film tells the story of a Roman sex worker, Cabiria, the hilarious and tragic Masina, who is fresh from a breakup after her lover threw her in the river to steal her purse. She doesn’t let it get her down, and we follow her on her escapades through the city. She has a compelling story to tell her fellow prostitutes when a movie star, Alberto Lazzari played by Amedeo Nazzari, picks her up one night to get over his own breakup. She asks for forgiveness from the Virgin Mary but the holy silence is not enough to help her transform her life. Her dreams of love are publicly exposed and ridiculed by a hypnotist, however, she meets Oscar, played by François Périer a man who promises to her a life of love and care, that very night. She gives everything up to be with him, including her house that she so loves to bring up every chance she gets. After being fooled once more, the distraught Cabiria takes a walk, perhaps the most memorable in all film history, and tells us without any words that it might not be ok, but she has not given up hope that it will be one day.

Cabiria is an Italian Cinderella, their names even share the same syllable count and share a final sound. First-time viewers of the first vignette, in which she goes out with a handsome Lazzari, might believe this claim more than anyone, that is until the movie star’s girlfriend comes over to makeup and Cabiria is left to hide in the bathroom. Her parents died when she was young and she has worked in rough conditions to sustain herself ever since.

She has done well enough to own her own home, a shack on the outskirts of the city that is nonetheless her castle, a prize for all the spiritual and physical toil she has faced. She gets defensive every time someone thinks she is lowly, pointing to the house as an indicator of her self-worth, “I don’t need anything. I own the house I live in.” She is a lost princess in her own mind. But unlike Cinderella, kindness isn’t her redeeming factor, in fact, at times she is quite rude and hilariously provocative. Cabiria’s buoyancy is what makes her our hero, and will ultimately save her where men fail.

When one takes the last five minutes of the film, in which our Cinderella has been abandoned at the ball, it becomes clear this is a director who refused to be put into one neorealist box and saw the beauty that Cinema of the positive can accomplish. The film is a perfect transition in his career. Like life itself, ‘Nights of Cabiria’ is genuinely hilarious at times and genuinely heartbreaking at others. Although it’s a step away from the bleak pessimistic standard of neorealism at the time, what could be more realistic than this dichotomy?

Any film labeled as a “Fellini masterpiece” is sure to be perfectly crafted. In ‘Cabiria’ his grasp of rhythms is at full force creating a slew of memorable moments. When outside the exotic nightclub the beating of the drums perfectly complements the handsome movie star telling Cabiria “Let’s have some fun.” The music swells when we watch the silhouette of the actor trying to pay Cabiria and her refusing, it turns what could be a very unromantic encounter into a moment of accelerated heartbeats and, in my case, even some tears; not to mention when Cabiria looks over to the sleeping beauty in his bed who will have everything she won’t. Like many Italian directors, Fellini often deals with the mystery and pomp, and circumstance of his Catholic upbringing. Cabiria and her fellow “fallen women” decide to visit a cathedral with the local pimp to clean their slate and ask for forgiveness. Between the chanting, the sheer amount of people, the bells, and the protestations from priests and repentant sinners alike, this scene is at once frightening and cathartic.

The tense lunch with Oscar in which Cabiria can’t seem to stop talking and Oscar, once a regular Romeo, can’t seem to get anything out of the mouth, tells us trouble is ahead, especially when he tells her to put her wad of cash from selling her house away. Their seemingly calm walk in the forest leaves you on the edge of your seat, and you think back to the first moments of the film. There’s a sensation of anxiety when you realize the film hasn’t ended yet when it probably should have, and can’t fathom it’s going to go well. Finally, the rowdy parade of smiling young people during Cabiria’s walk, the single mascara tear on her face, and the simple perfectly timed act of a stranger bidding her “good evening” harmoniously work to give us the perfect payoff.

On the surface, ‘Nights of Cabiria’ is a story about optimism and the human spirit, and it’s no small feat to deal with themes of such magnitude on a surface level. When one digs deeper, however, you can’t help but feel this is a story of womanhood, a deeply felt exploration of feminine independence and hope, how it succeeds and how it fails. It is always a story about a woman and her house.

‘Nights of Cabiria’ is available to stream on the Criterion Channel until August 30.