‘First Cow’: Udderly Amazing Buddy Comedy About The Discovery of a Cow 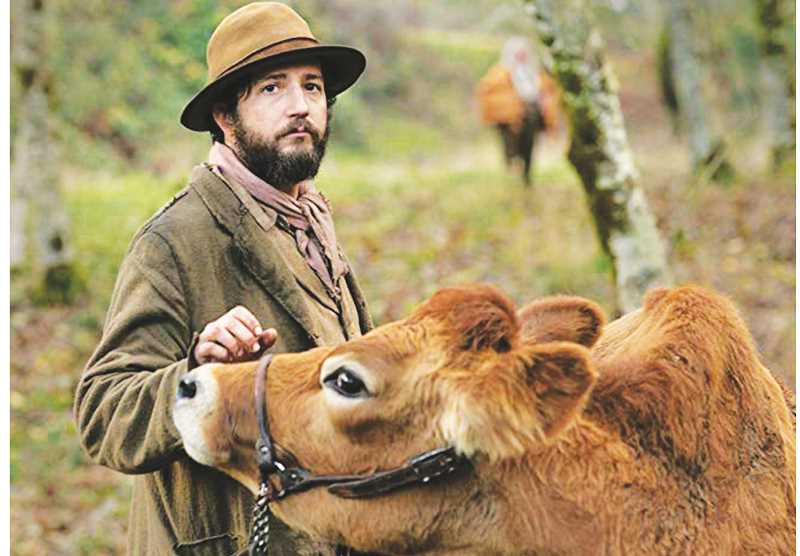 First Cow is a simple, yet fun and wholesome premise: Two best friends have concocted a brilliant way to make money in a small town in northern Oregon, where there was only one cow.  Since a cow has never been there before, the residents had never had milk, therefore they did not have pastries. Cookie Figowtiz (John Magaro) one day, while living with King Liu (Orion Lee), has an idea to steal milk in the dead of night from Chief Factor (Toby Jones), the owner of the cow, so that he can make biscuits and sell them in front of the nearby fort.

Next day, everyone is lining up and begging for their biscuits, auctioning their gold and silver to the two friends.  Perfect thing is, no one knows that they are made of milk. Once they see how popular and profitable this business is, it becomes routine.  They talk about their lives and plans after this: opening up a hotel or a bakery in San Francisco together. But how long can they keep this up before more cows show up and this is no longer profitable?  Or before Captain Factor discovers that he has been stolen from?

Reichardt Wastes No Moment or Frame in This Film, Using Every Second to Expand the World and our Characters

Firstly I would like to commend Kelly Reichardt on her direction of this film, and making the most mundane of tasks seem humorous or turn them into character-building moments.  Most of this film takes place in a small hut with these two men, so it is not only important to make it interesting as these two characters bond, but believable.  One excellent moment in the film was when King Liu made slippers out of wood while Cookie stokes a fire, both dreamily discussing their plans for the future. This not only gives the characters something to discuss and bond over, but is an excellent use and display of nature, as they both have to consistently rely on what is around them to survive.  She does this several times.

Even in the “heist scenes” where Cookie and King Liu run out and steal milk in the middle of the night, Reichardt uses these scenes as character building moments. We see Cookie gently stroke and whisper to the cow as he tugs at her udders, almost having full conversations. Though a bit funny, it shows how kind and caring Cookie really is.  While, King Liuw keeps watch in the tree, ready to run at a moment’s notice.

Reichardt Went Above and Beyond, Making the First Cow as Detailed and Authentic as Possible to Stay True to the World and the Cultures.

One of the core themes in this film is Eastern vs Western culture as white people encounter the Native Americans for the first time.  These interactions are important as characters such as the Chief Factor are the outsiders coming onto the Natives land, struggling to understand the language, culture, and landscape.  This is another aspect where Reichardt shined, as she had the costumes made from the Chinook tribe in Oregon, to ensure they were authentic. Characters such as King Liu were taught the native tongue so that his character would seem more realistic, because he was to be living in the region for years.  She says that they were taught a mix of languages from the area called “Chinook Wawa”. Not only does this add another dimension to the characters, but just chows another level of dedication on Reichardt’s part.

Most would not be willing to go to such lengths to ensure such authenticity and respect for the culture and history during this film.  Reichardt included other small aspects that you would not even think to notice. For example, there are a couple scenes that include a canoe, which was borrowed from a local Native American museum called Grande Ronde. Reichardt explained that they were skeptical of her and the crew at first, as they did not know if they would damage any of their old items or disrespect them, though they did gradually gain their trust.  As a result, the film is significantly more immersive and realistic.

Though a simple premise, First Cow has many messages to carry, and does so brilliantly

It is truly incredible how Kelly Reichardt pulls together so many thoughts and ideas in First Cow, a film about the “simpler times”.  She explores and critiques capitalism, man and his relationship to nature, while also displaying various cultures and how people deal with cultural barriers.

She expertly weaves and connects all of these messages together within this very fun and enjoyable movie, even connecting genres (buddy comedy, drama, heist film, etc). Her attention to detail in every aspect of this period piece is astounding. To round out some already wonderful aspects – the casting of the two leads; John Magaro and Orion Lee provide great performances as two unlikely strangers that become very close friends and I hope we get to see them in more projects soon.