An Analysis: The Poetry of Colors in Dario Argento’s ‘Suspiria’ 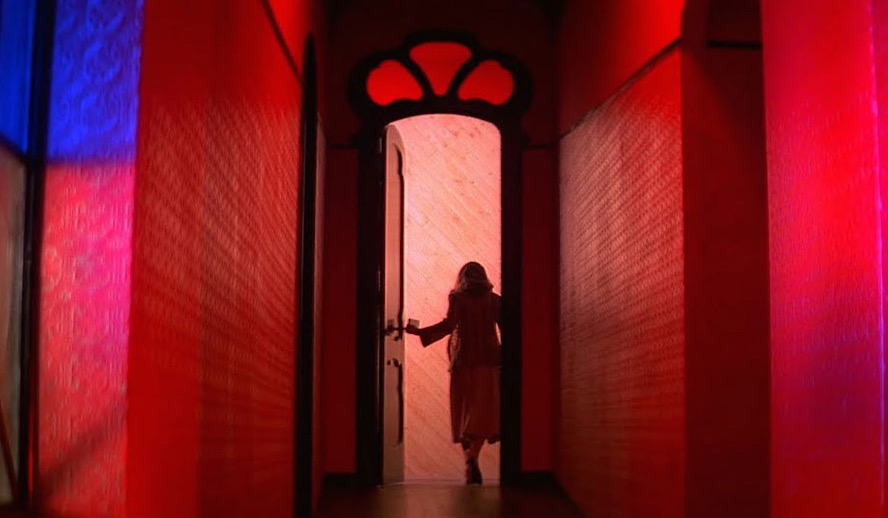 Dario Argento’s Suspiria was released in January 1977. Since then, it has become iconic in the world of cinema for its manipulation of lighting and color. Critics and audiences alike agree that Suspiria pushes the boundaries of non-diegetic lighting in film, subsequently opening up new possibilities for how color can be used in the medium. The jarringly bright colors combined with slow-paced editing merge together to create a film with an atmosphere of surrealist horror like no other.

Argento sticks to a relatively basic color palette, focusing on red, green, and blue intently throughout the film. Each of these colors has different meanings that represent important motifs in the narrative. What is maybe more jarring than the color palette is the lack of neutral tones in the set design, costumes, and lighting. There are only a few scenes in which the dominant color is not red, green, or blue. These scenes all take place outside of the dance academy, indicating that the world outside the witches’ control is bland and beige. However, inside of the academy, the witches’ influence is strong, and therefore, the colors are much brighter.

Related article: Did you see the hidden messages in Luca Guadagnino’s ‘Call Me By Your Name’? Find out behind the scenes facts in the full commentary and In-depth analysis of the cinematic masterpiece

Related article: ‘We Are Who We Are’: Coming of Age Series by Luca Guadagnino of ‘Call Me by Your Name’ Masterpiece

Red, to put it simply, represents evil in the film. Red lights often foreshadow the witches’ presence before the subject understands the danger. Each step that Suzy, the main character, takes in identifying the evilness of the dance teachers is lit with intensely red floodlights that reflect the witches’ true nature. Red is also used heavily in the production design to reveal the secret intentions of the characters. For example, the head of the dance academy is always shown wearing bright red lipstick, representing the hidden evil within her. At a later point in the first scene, there’s a brief shot that features a red handkerchief being used to clean the academy windows. The red of the handkerchief is eye-catching, and intentionally so, as it contrasts with the blue walls of the dance studio.

Once again, the color represents the hidden evil that exists within the dance academy. Red feels as if it’s constantly lingering over the dance academy in a cloud of darkness. Frequently throughout the film, there are scenes that begin in a neutral tone room, but eventually, pan to show a bright red doorway leading to another part of the academy. Red lurks throughout the halls of the academy, tinting everything that the students experience in an evil glow. Even the academy itself is painted a vibrant red on the outside, representing the danger that lies behind the doors. Garishly bright blood is used frequently in violent scenes, hinting at the surrealist horror that Argento strived for.

Oftentimes blue is used in combination with red to construct a juxtaposition of color and theme. Blue represents the opposite of red, which, in the case of Suspiria, is goodness. For example, the first scene shows the interior of the dance academy, which is a grandiose room detailed with blue wallpaper. The blue represents a facade of goodness in the dance academy, which is proven to be false with the pops of red that were previously discussed. Blue is also the color that Suzy wears most frequently in the film.

In the first scene, she enters the academy in a baby blue dress, symbolizing her innocence and goodness in comparison to the rest of the academy. Most of the climactic moments in the film, such as Pat Hingle’s murder, feature contrasting blue and red lighting, highlighting the battle between good and evil. Ultimately, blue and red are used most frequently in the film’s color palette as they represent the main conflict of the narrative: good versus evil, respectively.

However, another color that appears frequently in the visuals of the film is green, which represents knowledge and enlightenment, as well as serving as a stylistic complement to the red tones of the scenery. Red and green are complementary colors, which, contrary to popular belief, simply means that they accentuate each other due to their opposite places on the color wheel, not because they look pleasing together. Potted plants set against red wallpaper often pop out at the viewer, underscoring the red of the scenery and providing some much-needed visual contrast. But, more important than the aesthetic of green, is its meaning in other parts of the film.

Though used more sparingly than red and blue, green highlights scenes of realization for Suzy, thus representing knowledge and enlightenment. For example, the bedroom that Suzy and Sara are in when Sara during a moment of realization later in the film is bathed entirely in vivid green light. Green also makes appearances in the film via small spotlights of color, particularly when strange occurrences are happening around the academy. Often, these lights shine on walls or flicker through windows, reflecting Suzy’s growing suspicions about the academy.

Fundamentally speaking, the non-diegetic lighting and the unnaturally bright color palette combine to create a surrealist atmosphere. Argento purposely made this film to be visually jarring in every scene as to reflect the tension and uncertainty of Suzy in such a strange, off-putting environment. The visual aesthetic is nothing if not whimsical, but works in tandem with the editing and soundtrack to echo the dark magic of the academy.

The editing is slow, it lingers in the same way that red does throughout the film. Events of the film are showcased in long cuts that display the action for what feels to be much longer than necessary. Gratuitous violence is depicted through varying camera angles and shots that all seem to stay on screen for just a little bit too long. The slow editing purposefully emphasizes the details of the production design, allowing the audience to fully register the color and scenery of the academy.

To sum up, Argento’s Suspiria is a visually stunning masterpiece that pushed the boundaries of color and proved that lighting does not need to be diegetic in order to be effective. Now, Suspiria can even be viewed as an early influencer of the “neon-noir” aesthetic in films like Good Time and Drive, due to its heavy reliance on nighttime filming accented by non-diegetic, colorful lighting. The visuals of Suspiria, much like the narrative, are a stylistic trip that makes the film worth a watch any time of the year.