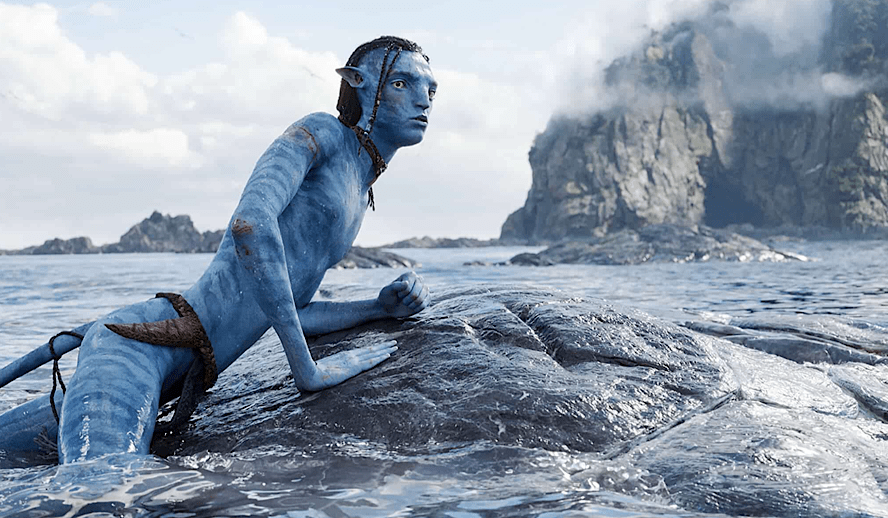 Photo: ‘Avatar’: The Way of Water’

After thirteen years of waiting, the second installment of James Cameron’s ‘Avatar’ series is here; in that time new technology was created and three planned movies escalated to five. This  film ushers the franchise back into the spotlight as Cameron continues to work on the upcoming additions.

The continuing epic centers around the Na’vi race on an extraterrestrial planet as they battle with humans attempting to mine the planet.‘The Way of Water’ picks up with Jake Sully (Sam Worthington) living with Neytiri (Zoe Saldaña) and their family on Pandora. New friendships are made with the Metkayina tribe, introducing Roanal (Kate Winslet) and Tonowari (Cliff Curtis) as characters, expanding what we know about the Na’vi people.

The film plays over three hours but never breaks the cardinal rule of being boring. Compared to its counterpart it felt more like an action movie; not as much time was spent on the exposition that needed to be there in the first movie. The sequences we are used to from Cameron are back as the playing fields are evened in closer combat between friends and foes. The addition of new creatures and characters allows for plenty of interest, shedding light on the Na’vi people and the way they interact with the world.

A critique of the first ‘Avatar’ was the lack of depth within the characters. The film felt like a video game, with an immersive world that has epic adventures with characters more than happy to comply with the narrative given. Mending this issue in ‘The Way of Water’ brings an intimate look into the lives of Jake and Neytiri as their internal conflicts shed light on the spirituality and determination as a people. Jake no longer feels like a video game character with dull lines, but a part of the world that is now around him.

The currents underneath the majestic bioluminescent world of Pandora are still that of human influence. Cameron pins colonialism and imperialism as the markers of history that get repeated. These big themes are always present with returning villain Quaritch (Stephen Lang) and the new head of the operation, General Ardmore (Edie Falco), doing everything they can to make contact on the planet.

The focus of ‘Avatar’ mainly heralds from the stunning visuals that Cameron has created through the use of motion capture and special effects. Remarkable images bring you into Pandora, to experience it the way the Na’vi do. This film exceeds the expectations for a franchise that was thought to have fallen out of spectators’ minds. Just like the first film, it will have you staring at a screen for hours in awe.

A recurring dialogue that can be recognized from the first movie is “seeing” someone, meaning they understand you; showing the difference in culture between humans and Na’vi. The language is deep and sensible as it reflects the way the Na’vi people think. They are deeply connected to the world around them as is shown by their bodies’ make-up. The Na’vi’s tendrils, often spotted at the end of their hair, are used to create a bond with the creatures around them. Feeling them breathe, think, and be alive is what the Na’vis are all about.

All of those sensibilities are translated in the shots and movements of the camera as a further emphasis on the Na’vi culture. During transient moments in the water, characters are forced to challenge their own existence as they meet the feat of adaptation, a different way of being. The fluid shots of characters swimming in the water and bonding with the environment creates the emotional response that we are connected to the world. Even though we are sitting in theater seats, we can understand these points of view.

The Actors’ Dream of Motion Capture

Part of the journey the actor takes for the production of ‘Avatar’ is the use of motion capture to digitally create the Na’vi characters. By now, befores and afters of the characters have been seen in behind-the-scenes footage. What motion capture helps to do is record the movement of objects or people. The little dots reflect infrared light that sends signals back to stationary cameras and can create data points for animators to go off of to create the Na’vi people.

The use of a facial camera helmet works to help showcase the actor’s performance. Even the smallest movement reflects back and creates a sense of reality to the characters. This allows audiences to not only trust but empathize with what the Na’vi are going through. The technology allows for the actors to be free and effortless as they have to inhabit a world that is not actually around them. Intimate moments crawl through as the passion for family and togetherness permeate across Cameron’s canvas.

The actors also took part in underwater training to hold their breaths. This has allowed for longer takes to happen with characters in the water which allows for a heightened experience. Kate Winslet got good enough at it, breaking records by holding her breath underwater for seven minutes and fifteen seconds.

Depths Cameron Will Go for Exploration

James Cameron is an ambitious director, helping usher in the heavy special effects blockbuster films that there are today. For decades, Cameron has been ushering in new technologies to not only help revolutionize the film industry but other industries as well. His work on ‘Titanic’ showed his level of commitment when creating a submarine that had gone the deepest any other sub had gone.

Part of what took so long for the second film to come out was that the technology was not fully up to speed with Cameron’s perfectionist tendencies. Considering the techniques used in the first ‘Avatar’ have become generally accepted as a standard for CGI films, Cameron had to develop something to break ground again.

He developed underwater motion capture, so instead of having his actors suspended in the air with the onesie suits on, he had them hold their breath underwater to mimic underwater conditions. He used a 900,000 gallon tank that was fabricated to simulate the ocean currents.

These innovative ideas are what have made Cameron’s work famous. They are what drive the future of the industry and inspire new generations of filmmakers. As he continues to tackle the next three films, we can expect more ingenious visuals.

James Cameron is still at work on the next ‘Avatar’ film in 2024. Sam Worthington will next be seen in ‘The Georgetown Project’ with Russell Crowe, directed by M. A. Fortin and Joshua John Miller. Zoe Saldaña will next be in ‘Guardians of the Galaxy Vol. 3’ with Chris Pratt, directed by James Gunn.