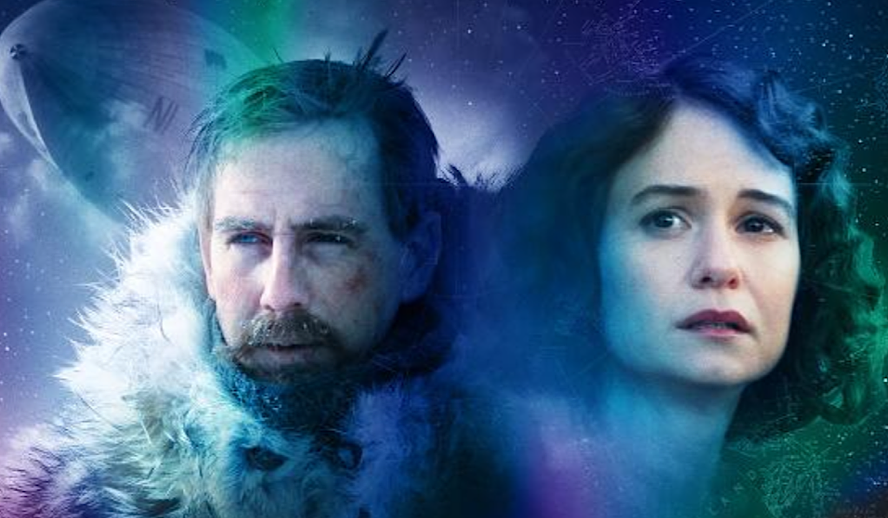 ‘Amundsen: The Greatest Expedition’ is a thrilling and shockingly true story about the life and adventures of Roald Amundsen. Roald was a Norwegian born explorer and his trips took him to the North and South Poles. In 1911, he led a team of explorers to the South Pole and became the first ever group to successfully reach it. Over the following decade and a half, Roald led more explorations, including the first verified visit to the North Pole, before his sudden disappearance in 1928. His remains were never found.

The majority of ‘Amundsen’ either takes place in the chilling, icy tundra or revolves around the concept of exploring it. Ice covers most of the screen, either as a backdrop or physically on top of the explorers and their bodies. Since most of the scenes involve white in some way, the crew behind ‘Amundsen’ use a variety of cinematographic strategies in order to make the movie still exciting. Sprawling, overhead landscape shots show just how vast the Arctic is in comparison to our main cast. No matter how high and mighty they may feel about their achievements, Mother Nature doesn’t care. These expansive shots serve to showcase how little Roald and his team are in reality, and even if they have decades of experience the wilderness is ruthless.

While the setting is beautiful, it also feels alien. Some details we know before they are introduced, how nothing grows there and everything is either extremely bright or devoid of life. We know that icicles are prone to forming on beards and noses, but we don’t really know just how destructive this land is. And so, ‘Amundsen’ shows us reality in the only way it knows how, in a deadly sudden accident where the ice breaks under the team. We see one of the members of Roald’s group dangling from the end of a snow sled, hanging on for dear life. His gloves slip as he struggles for a firm grasp and the other cast scramble to help him. It’s such a tension-filled and terrifying moment that ‘Amundsen’ does perfectly.

Set in a similar time period as other survival movies, ‘The Revenant’ with Leonardo Dicaprio comes to mind, ‘Amundsen’ truly immerses us in this older time period. All of the explorers wear heavy fur coats that they’ve made themselves and are armed with lanterns. In their personal time, they are all consistently dressed to the nines in button-up shirts and ties. The styling and production design of the film was done magnificently.

The Hidden Symbolism Behind Ice

Previously, I mentioned the use of white and ice in the majority of the movie. While at first it may just seem unintentional, the movie is about exploration at the Poles after all, it has a deeper meaning to it. Ice for many of the characters represents a barrier or obstacle they must conquer. In one scene, Katherine Waterson (who plays the love interest of Roald Amundsen) completely submerges herself in an ice bath to prove to herself her own strength. While the men in her life are off adventuring, she’s stuck in a house and unallowed to join her ex-lover, Roald. For her, ice is a proving ground to show her inner strength.

Ice represents a similar obstacle or barrier for other characters, like Roald Amundsen. For him, conquering the ice means achieving his lifelong dreams as well as cementing himself as better than his rival. Becoming the first successful exploration team would prove to himself and others his superiority. However, ice also symbolizes his own inability to connect with others and his cold nature. As he becomes more obsessed with his dreams, Roald pushes aside emotions and logic in pursuit of something bigger. He acts selfish and self-absorbed and is willing to sacrifice anything and anyone in order to reach the Poles. The captain his crew knew is gone, and while he’s often called out on his behavior, it only gets more ruthless.

The protagonist of the movie is Pål Sverre Hagen best known for his roles in ‘Kon-Tiki’ and ‘Troubled Water’. Hagen is a magnetic force on screen and many of the other characters are drawn to him. He plays the obsession trope extremely well and in his journey to madness, we’re right there with him. In his search for glory, Hagen begins to self-destruct and turn away from his friends and his brother. Even when he’s called out for his behavior, Hagen plows on and does things his own way. In some movies, this might be annoying, but Hagen plays it so well that it seems logical. His performance is captivating, so much so that we often forget the real dangers to his actions and are on his side.

Hagen is so effortlessly charming and manipulative in this role as a man driven crazy by his childhood dream. When the dream is within reach, he claws his way toward it and is willing to sacrifice anything and everything. Although Hagen plays the title role of the movie, he’s often sidelined for others to tell their own perspective on him. While he’s not as present as I thought he would be, his strong performances make up for the lack of screentime. He’s so three-dimensional that it feels like Hagen’s Roald Amundsen will walk off of the screen and into the room at any given moment.

Hagen switches from frigid reactions to howling anger so easily that it’s terrifying. His mastery over his craft is evident, even though he’s been credited in less than 40 productions. With his facial expressions, Hagen portrays more than he ever could with words. His smirk is ever present and he has a long cruel streak that often appears. These key actions help shape our idea of Roald Amundsen.

While he may be known in Norway, Hagen is relatively unknown worldwide. In his past work, Hagen was in minor parts or the supporting cast for the majority of the time. Now, however, gives him the opportunity to shine like he should. Hagen controls the screen and our attention every time, he makes the most of his part. Roald Amundsen was a real person over a century ago, but with Hagen’s performance, it feels like he’s alive again.

‘Amundsen’ is now available to stream.