‘Little Women’: I Will Always Stand By Jo March’s Mantra, Women Have More To Offer Than Love, They’ve Got Talent – Did You Hear That Golden Globes & Oscars? 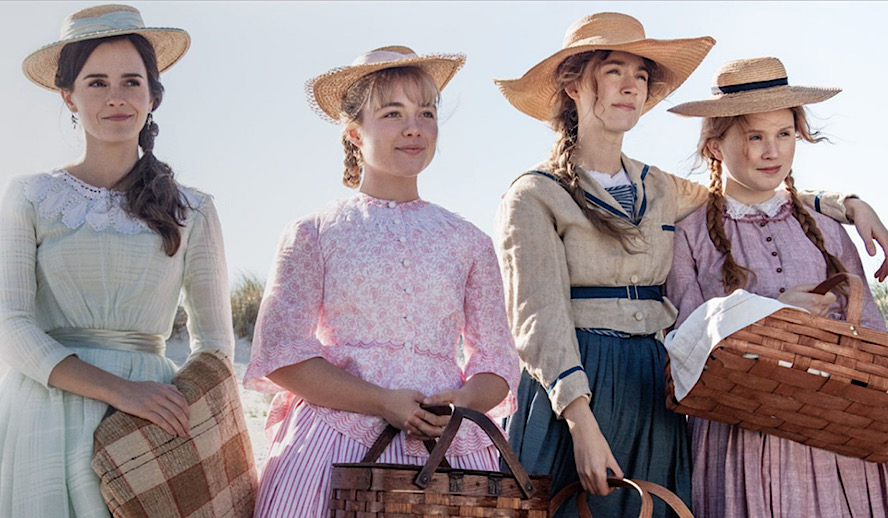 Greta Gerwig started off her solo directorial career with a bang when she released Lady Bird in 2017.   She brought a new, interesting, and personal voice to film when she made her debut, and audiences waited with bated breath to see what sort of life and character she would bring to the screen next.  It was not long before it was announced that she would be tackling her next project, a literary adaptation of Little Women.  The film is an unlikely and uplififting feminist tale of the March sisters, who must find a way to navigate the world post-Civil war.  Throughout the film, we mostly follow Jo March (Saoirse Ronan), whose only desire is to be an author.  At every turn, her stories and novels are rejected, all the while old-school family members such as Aunt March (Meryl Streep) would hammer the idea that you must marry rich.  There was, and maybe still is, a preconceived idea during this time that women could not survive on their own without a well-off man to support them, however, Jo challenges that.  She embodies an ambitious, career-focused woman who knows that she has more to give than love.

And I’m so sick of people saying that love is just all a woman is fit for.

“Women, they have minds, and they have souls, as well as just hearts. And they’ve got ambition, and they’ve got talent, as well as just beauty. And I’m so sick of people saying that love is just all a woman is fit for. I’m so sick of it”, Jo shouts.  This is one of the most emotional and profound scenes in the entire film, when Jo is finally at the crossroads between her career and marriage and she feels she has to choose one or the other.

Amy March (Florence Pugh) was an unexpected scene-stealer throughout the film as she portrayed a desirous, yet passionate young painter.  Like her older sister Jo, her art was going nowhere, and she had a lingering concern for her future sustainability as a result.  Despite having no actual love or interest, she considers marrying into wealth throughout the film, because she feels it is her only way.  When Laurie (Timothée Chalamet) confronts her on her ideology, she gives a wonderful monologue that also applies to society today,

“I’ve always known I would marry rich. Why should I be ashamed of that? As a woman, there’s no way for me to make my own money. Not enough to earn a living or to support my family, And if I had my own money, which I don’t, that money would belong to my husband the moment we got married. And if we had children, they would be his, not mine. They would be his property. So, don’t sit there and tell me that marriage isn’t an economic proposition, because it is.”

The fears in the film are very reflective of society today

This monologue is very reflective of the fears of society today.  Here she is essentially exposing what marriage is, in some cases. Amy desires a comfortable life where she can create art and be content, but that is very difficult to do.  Likewise with any job or career, men have an easier time than women.  Though we root for Amy to continue to make her art and to never give up, reality comes crashing down on you as she gives this impassioned speech to Laurie.  The odds are stacked against her in every way. Amy was a wonderful opposite to Jo. Where Jo rebelled against societal norms such as femininity and craved independence, Amy embodied beauty and grace with lavish dresses yet knows what the reality of the world is.

As Jo stands up to be a more masculine character in this film, interestingly, Laurie appears to take on a more feminine role.  It goes without saying that Timothée Chalamet put on an incredible performance as Laurie, who is the main love interest for both Amy and Jo.  Remarkably, he also is a fish-out-of-water, like Jo. Though he is born from an upper-class family, he prefers the quiet of the March household, where the sisters put on silly plays and dance around.  Chalamet contrasts most men around him by being very fun, bombastic, and giddy. This is most apparent when he is on the ballroom floor, dancing with every girl he sees or playfully joking around with Jo.  However, it is worth noting that Laurie has the more feminine name while Jo carries a masculine name. Laurie does also defy norms by being very “fashionable”, wearing lots of neckties and scarves rather than the traditional suits. His physicality, as compared to the other characters, is also striking.  Chamalet does have a beauty to him, as he has a small frame with curly brown hair that droops over his eyes. While the other men next to him seem imposing. Gerwig commented on the fluidity of their gender here.  Chalemet was incredibly fun to watch as he put on a unique, nuanced performance.  It is rare to see a film with so much homely goodness, that you want to wear their clothes, grab a cup of tea and walk into their world to cozy up.

Rendezvous At The Premiere – Little Women

Little Women is a fantastic film to close out the year with.  Greta Gerwig has brought her own voice to this literary adaptation and has made a masterpiece.  Though it is stuffed with many characters, we get to know each and every one and go on their journey. It is a testament to Gerwig’s writing that I feel so emotionally invested in these five different sisters’ stories during the course of one film.  Despite Little Women being a period-piece, many of the themes and messages Gerwig is trying to relay are very much relevant today. Jo March is the epitome of a feminist, she does need nor care for a man.  I will always stand by her mantra, women have more to offer than love.

The Golden Globes snubbed this gem, hopefully the Oscars will have enough sense to respect the talent in this film.